Cardiff Anime & Gaming Con will take place this 19-20 August at the
Mercure Holland Hotel, and will be an all age event for anime fans,
gamers, comic fans, and cosplayers! Make sure to go book your ticket
now @ http://www.cardiffanimecon.com

The price remains low at just £9 per day if you book beforehand.

They have so much content including the Talent Show, Cosplay Masquerades
on both days with a £100 cash prize up for grabs on the Sunday,
Karaoke, your favourite Anime and Comic Exhibitors, singers,
performers, many-many talks and panels, over a dozen Workshops, panels
and talks, Anime Screenings, TCGing tournaments such as YGO, MTG and
Weiss Schwarz, Roleplaying/Boardgaming, over a dozen Video Game
Tournaments including Smash (£100 cash prize), Street Fighter V,
Tekken 7, League of Legends (£100 cash prize), Overwatch, Rocket
League, Mario Kart 8 and so much more! 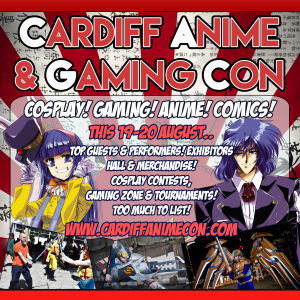