A CELEBRATION OF THE MUSIC FROM GAME OF THRONES, THE LORD OF THE RINGS, AND THE HOBBIT LIVE IN CONCERT WITH SYMPHONY ORCHESTRA & CHOIR 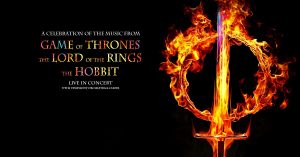 They are the most beloved and recognisable big and small screen creations of all time – let alone just in the world of the Fantasy genre –and now the music of Game of Thrones, The Lord of the Rings and The Hobbit will be celebrated in a special orchestral concert tour calling at Cardiff St David’s Hall on 18th April 2020 .

The show, presented by Senbla by arrangement with Silva Screen Live, will be a celebration of the music from the most memorable moments from across the worlds of Middle Earth and the Seven Kingdoms, which Sci-Fi Bulletin called in 2017 “… a three-in-one précis of some great music”.

The stunning musical accompaniments will be performed live by a huge orchestra, creating an immersive live concert experience that is every bit as thrilling as the twists and turns in the world’s respective histories.

Game of Thrones is a TV show like no other – the hit HBO series has captured the hearts and minds of millions the world over, and its recent finale was perhaps the most talked about in television in history.

Composer Ramin Djawadi began creating the music for the show in 2011, with most of the eerie, magnificent score back then being penned for a small string ensemble. With the success of the next six seasons of the show, the music budget became bigger and bigger, allowing Djawadi to create even more emphatic pieces for large orchestras.

The success of HBO’s Game of Thrones is almost unfathomable. The small screen adaptation of George R.R Martin’s series of fantasy novels has drawn in record numbers of viewers all across the world, being awarded thirty-eight Emmy Awards so far.

One of the most successful film series of all time, The Lord of The Rings, as well as it’s prequel series The Hobbit, will also have their most memorable pieces performed live in the concert.

The original trilogy of The Lord of The Rings: The Fellowship of the Ring, The Two Towers, and The Return of the King, directed by Peter Jackson, are among the highest grossing film series of all time, as well as being critically acclaimed – winning a combined 17 out of the 30 Academy Awards they were nominated for.

Composed by Howard Shore, conceived the soundtrack as music of unparalleled power and invention, demanding of huge resources – a large symphonic ensemble, and scored around 95% of the films’ length – eventually having over 12 hours of music released over various formats / used in the films.

The success of the The Lord of the Rings’ soundtrack led Shore to also score Peter Jackson’s follow-up prequels to Lord of the Rings; The Hobbit: An Unexpected Journey, The Desolation of Smaug, and The Battle of the Five Armies.

Now audiences in Cardiff, can experience a concert celebrating one of the most vital and stand-out aspects of the Fantasy genre in an all-encompassing live concert experience– though fans will have to be quick to snap up the precious tickets!