Three Cardiff based community groups are amongst those celebrating this week after local supporters helped them secure a share of the £82,000 of funding from Skipton Building Society’s Grassroots Giving Scheme.

The winners were announced this week, showcasing the voluntary groups across the country that Skipton Building Society will support via Grassroots Giving 2015.

Now in its third year, Grassroots Giving, awards £500 to each winning group who has achieved a high enough proportion of the 30,000 votes cast. After making it through to shortlisting stage, the UK’s fourth largest building society profiled each group on their website and asked the public to vote for who they thought was the most deserving and Clwb Rygbi Cymry Caerdydd, Radyr Cricket Club and The Unknown Theatre Company received enough public votes to make it into the top 164 winners.

The winning groups are all run for their local communities, managed by volunteers and are largely self-funded. They all have unique challenges when faced with running costs and having the funds and resources to grow. 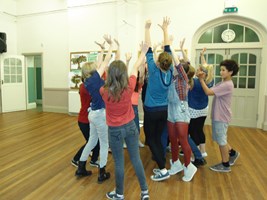 Sue Walker, Skipton Building Society’s Regional Manager stated: “These self-funded groups work hard to improve their local community and we’re proud that this funding from Skipton will play a huge role in their future growth. Often small groups are out on a limb and struggle to gain funding from elsewhere, as they are not registered charities. Grassroots Giving enables us to really get to the heart of our local communities and we love being able to help causes that we see in action in our local neighbourhoods. We know that the money they receive will make an impact and this is really important to us. It’s been a pleasure to inform these groups that we are able to support them and we look forward to their updates throughout 2016, which we will share, as we work with them to further raise their profiles”.

As part of its Grassroots Giving initiative, Skipton Building Society has also launched a series of free resources covering a range of key areas for community groups, which can all be downloaded for free at www.skiptongrg.co.uk/free-resources. To provide further added value the Society also provides a social network specifically to help community and voluntary groups get better connected, acting as a ‘hub’ for all Grassroots Giving followers, winners and past/future applicants, to enable knowledge sharing and networking.

Skipton Building Society launched its Grassroots Giving programme as part of its 160th anniversary celebrations last year. In order to build on the legacy of the organisation Skipton this year committed to 162 pots of £500 for their third year.

For more updates on Skipton Building Society’s support of community organisations you can also follow updates via  twitter.com/SkiptonBS_GrG