‘A LOVE THAT NEVER DIES’ IN UK CINEMAS 18TH MAY 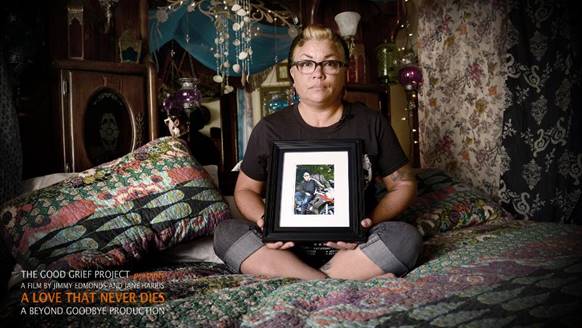 This project is produced and directed by Jane Harris and Jimmy Edmonds, with cinematography and editing from BAFTA-winning filmmaker Jimmy Edmonds. It’s London Film Premiere will take place at the Prince Charles Cinema, Leicester Square on its opening night.

A LOVE THAT NEVER DIES is a personal journey by two bereaved parents Jane Harris and Jimmy Edmonds and a love letter to their son Josh. Their son died in a road accident in South East Asia seven years ago. They now honour him with their own journeys: to Vietnam and the place where he died, to Varanasi, India and a road trip across the USA, where they meet with other families who have also lost a child, all of whom have found grief variously isolating, transformative yet ultimately life-enhancing.

A poetic film in a culture that is still uneasy talking about death, dying and bereavement it gives a hopeful voice to grief in ways that will move and inspire.

“Powerful and important stories. Grief can bring us together and teach us how to live. Few people have embraced their grief stories with as much love and energy and courage as Jimmy and Jane.” – Dr Katherine Shear (Centre for Complicated Grief – Columbia University)

Director, Cinematographer & Editor, Jimmy Edmonds said: “As a filmmaker, A Love That Never Dies has been the hardest project I’ve ever worked on. As a bereaved dad, it has probably saved my life.”

Co-Director and Producer, Jane Harris said: “It’s about not shying away from grief, of not letting go but of continuing the bond with the deceased and finding rewards where we expected none.”

The film will be shown at Cardiff Chapter Arts Centre on Tuesday 26th June.