A Review of the new Pitching In DVD By Melissa Compton 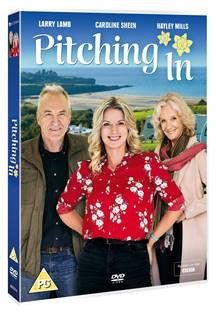 The new Pitching In DVD introduces us to Daffodil Dunes Caravan Park, the home and business of Frank Hardcastle played by Larry Lamb. This small village of Glen Mor set in the heart of the Welsh countryside, seems peaceful from the wide panning shots of the opening credits, as we meet the residents in the opening scenes, we soon see it is a modern representation of a small village with breath-taking scenery. We open on the day of Frank’s birthday and are swiftly introduced to Franks daughter Carys played by Caroline Sheen returning to the village after living in Manchester with her son Dylan. Carys is the shining star of the show, impulsive, headstrong and emotional and constantly causing trouble while being blinded to how it all happened. Carys’s love life is a strong focus and is best summed up with one of her own line,

“Some people never find their daffodil I guess,”

The drama of Carys’s life constantly overshadows Frank who is still mourning the death of his wife and considering selling Daffodil Dunes Caravan Park and retiring. The DVD is packed with 5 episodes and extras. The name of the show is a good reflection of the acting the supporting cast make this a programme everyone can relate to with a wide range of characters, including Kitty played by Melanie Walters a co-star from Gavin And Stacey. Larry Lamb’s character Frank is more serious than comedic, allowing Caroline Sheen’s character Carys to steal centre stage. The show is easy going until the fifth episode where issues of cancer of raised, reminding Frank and Carys of their previous experience of watching a loved one struggle with the illness. We also meet Iona played by Hayley Mills Frank’s love interest or a ruthless estate agent we haven’t yet discovered which!

Carys’s planned events cause chaos and mayhem from the medieval mayhem to Fitness survival in the Welsh mountains. The show contains a cocktail of fun, drama and serious issues. Making this show easy to enjoy at any time of day.

The DVD is out now!