A Thermos Flask by the Lake by Vince Nolan

Here’s a top tip.  She Who Won’t Leave Home and I were recently given a very large bottle of rose wine which could only fit in the fridge if we removed the veg from the veg drawer.  The veg had to go.  Of course, once uncorked, it could not go back in since it had to lay down, thus giving us 1.5 litres to drink in one session.  Not impossible of course but certainly a challenge.  Then came the moment of creativity.  I decanted some of the wine into a thermos flask, sealed the flask, returned it to the fridge and we drank the rest.  This kind of creativity will see us through. 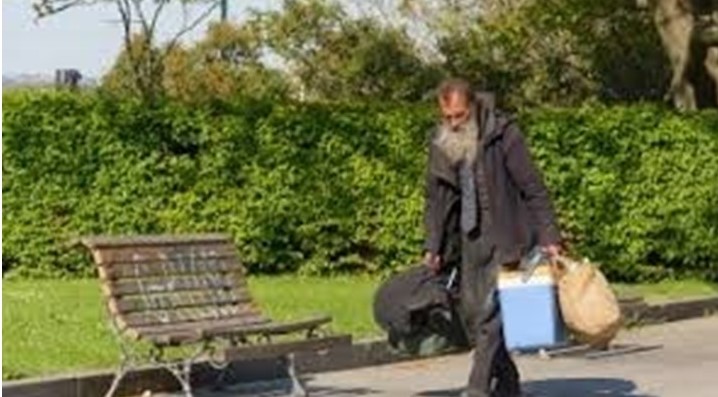 Taking the flask activity to another level, we have devised a daily walk of a few miles with a halfway stop on a bench overlooking a small lake.  If you sit on a park bench with a bottle of wine people look at you in a very disparaging way.  However, if you sit with a thermos flask and two china mugs (full of wine), nobody is any the wiser and drinking al fresco is good fun.  Here’s one of me about to sit down.  Note:  the flask is in the cooler box to keep extra cold and I have not seen a barber for weeks because of the crisis.  Still wearing a tie though for appearances sake.

To prove I’m not boring I went and got a tattoo.

Me: (proudly) It’s my thermos! From work!

She: (reaching towards me) Well, uh, the line work is certainly…

Me: (slapping hand away) Don’t touch the thermos tat.

The current Mrs Nolan has just informed me that couples can no longer go to the supermarket together.  We have never been there together since I do the shopping.  She also told me the other day that we needed to look out for simpsons.  I suspect she meant symptoms. 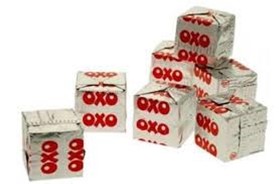 Why is BC (before Christ) in English when AD is in Latin, Anno Domini?  (In the Year of the Lord).  I thought after years of a Catholic upbringing I had this religious thing sorted out, at least the chronology of matters, but apparently I don’t.  Anno Domini dating was apparently first calculated in 525 and began to be adopted in Western Europe during the eighth century so there is already a built-in vagueness to all this. 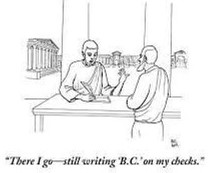 But nobody really knows exactly when Jesus was born. Some scholars think that he was born between 6 BC and 4 BC, based partly on the biblical story of Herod the Great.  To follow this line he was born before he was born based on a story in the bible?  Now Herod the Great existed and died allegedly in 4 BC according to Roman records of the time, (you following this), so for there to have been a flight into Egypt, as per the Matthew Gospel, (when Herod was off killing all the first born), Jesus had to have been born before 4 BC when Herod died.  So if our calendars are 5 years out does that make me older or younger?  I have confused myself now.

At least we can rely on my new dating system, BTV (before the virus) or in Latin, Ante Virum.

I was in the queue in Tesco’s (I know) trying very hard not to strike up a conversation with the know-all behind me.  You will understand why and nothing to do with social distancing.  He said, to nobody in particular: “This supermarket has made more money in the last two weeks than in the last two years.  We have got more people with the virus (which he couldn’t pronounce) because we are more cosmopolitan round yer.  That’s why we needed that relief road.”

Where do I begin?  A series of pointless, unrelated and inaccurate statements from somebody who was about as articulate as Arthur Mullards’ Dog (if he had one) and these people have the vote!

Former US President Teddy Roosevelt said:  “Nobody cares how much you know, until they know how much you care.”  He also said:  “If you could kick the person in the pants responsible for most of your trouble, you wouldn’t sit down for a month.” Honesty from a President? 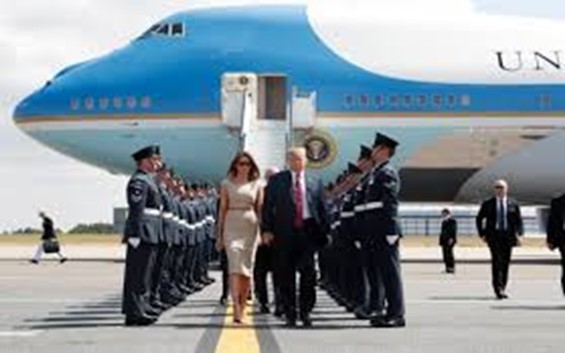 The ego has landed!

I have never been convinced about Karma but I recently rescued a ladybird from a spider’s web.  The next day a client who owed me a sizeable fee, for far too long, finally paid me.  It was either Karma or the solicitors letter I sent him. 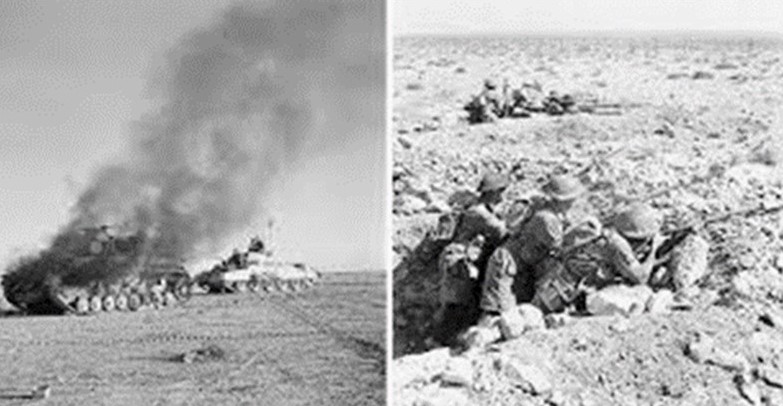 We talk about lockdowns these days but only a relatively short time ago my Dad found himself “locked-down” in the siege of Tobruk in North Africa.  He was in the 8th Army (Desert Rats) and along with Indians, Aussies, Poles and Gurkhas were surrounded on all sides (apart from the sea where they were supplied from) by the German and Italian armies.  The siege lasted from 31st March 1941 until 27th November of that year.  Now that’s not going out (and under fire).

As I was walking past a school recently I saw a kid being bullied by three other kids, so I decided to help. I knew he wouldn’t stand a chance against the four of us.

Dad:  Did you hear about the kidnapping at school?

Dad:  The teacher woke him up!

Finally, if the bullying and violence in school is really getting to you and you don’t want to go back after the enforced break, you need to find a job away from teaching.