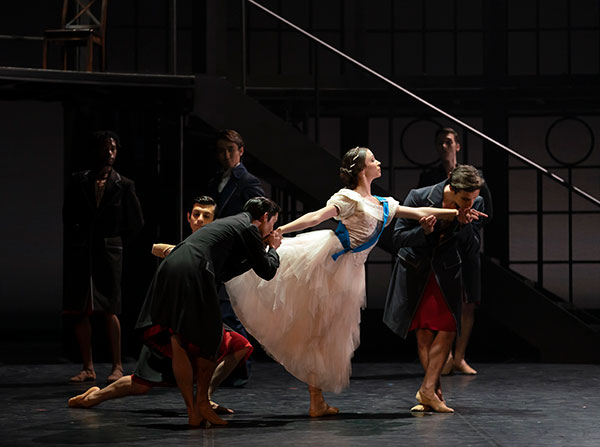 Abigail is from Harrogate in North Yorkshire and joined Northern Ballet in 2011/ She trained at The Royal Ballet School and Elmhurst School for Dance. Her previous roles have included Marilla (The Little Mermaid), Bellino (Casanova), Jane (Jane Eyre), Cathy (Wuthering Heights), Sugarplum Fairy (The Nutcracker) and Juliet (Romeo and Juliet).

What research did you do to prepare for this role?
Before we began creating the ballet in the studio, I read a very comprehensive biography of Victoria. It seemed like quite a task to start with! I really got into it over the Christmas period so it was as fresh in my mind as possible before we started rehearsals in January. We continued to research throughout the creation of the ballet and for me, it’s not just been about researching Victoria herself but also her connections and relationships with the other people in her life.

How does playing a historic figure differ from fictional characters?
It differs from fictional characters because this woman actually lived! We’re not presenting someone’s idea of her personality, or events that have been made up, it all actually happened. With fictional characters you have the freedom to interpret them based on your perception of them, but not so with someone as real and iconic as Queen Victoria. If I think about all the history that we are trying to portray, it’s actually quite daunting but I’ve tried to put that aside and do my best to interpret Cathy’s vision for the ballet.

This is your first time creating a principal role with Cathy Marston, how has the experience been?
I am really glad to have been given this opportunity. I worked with David Nixon to create The Little Mermaid in 2017 and that gave me a good insight into what it actually takes for something to be created on you. This is the first time I’ve been created on by Cathy Marston though and she and David have completely different ways of working so it still feels brand new. To have the role of Victoria created on me makes it really personal and it’s fulfilling for your ideas and interpretation to be accepted by such an established choreographer.

Victoria was a woman in power at a time when it was predominantly men in positions of authority. Do you think it would have been difficult for her without any female counterparts?
I think that Victoria didn’t feel she had any women to rely on, especially earlier in her life. She had a very challenging relationship with her Mother and other women that she became close to went on to leave her some way or another. I think this is why later, when she feels she has nobody left, she clings onto her youngest child Beatrice. She placed a huge amount of pressure on her connection with Beatrice.

Has your opinion of Victoria changed over the creative process of this ballet?
After reading her biography my overwhelming perspective on Victoria was what a strong woman and character she was, portraying this in the ballet is really critical. I didn’t realise how hard she had it, her responsibilities, the demands from the people around her, it must have quite wearing for her. When I’m playing her how I feel about her changes depending on what scene it is. Some times I feel sorry for her, other times I feel like he has a real stick up her back and is very stern. I play her as a new young Queen through to the end of her life, following her through all the deaths that she encounters and she really does go on an incredibly long journey.

The design for any ballet is incredibly important in creating the world in which the ballet is set. How do the costumes help or potentially hinder you, and how do you adjust to them?
The finished costumes are really beautiful and I enjoy being involved as they are created and the different stages of that process. One of my costumes is a big black tent dress. It’s gives that iconic image of Victoria and symbolises how she wanted to be seen. After Albert died, she wore black for the rest of her life, she wanted people to know she was a widow, that she was once in love, that she had been married and that she’d had that life. The big tent dress is incredibly important but not a lot of my legs and feet can be seen when I’m wearing it so I have had to think about how I carry myself, my upper body and hand gestures. The other dresses I wear are much lighter and don’t hinder my movement.

Describe the ideal scenario of the opening night of Victoria?
There’s always going to be a bit of stress and everybody’s very anxious but the nerves and excitement are good. I don’t enjoy being nervous but I do deal with my nerves well; they’re a sign that I want to do well and for everything to go well rather than nerves about people watching me. I want to do justice to the character and the ballet.

How do you want Victoria to be viewed by the audience?
Not in the typical way. It’s not all thrills and tiaras because that wasn’t what her life was. The ballet is called Victoria but we see the production through the eyes of Beatrice, her youngest daughter, and her edit of her mother’s diaries. Beatrice is directing the narrative of the ballet so I think that will be interesting for the audience to see the highs and lows Victoria’s life from Beatrice’s point of view. She transcribed and edited her mother diaries, burning the originals, so what we know about Victoria is Beatrice’s version of her mother and what she has allowed to be made available to the public.

What does it mean to be part of an arts organisation such as Northern Ballet?
It’s a privilege really because what we do is extraordinary. It’s not a normal 9-5 job and every day we are trying to progress ourselves and make ourselves better. It’s a great team company to be in.