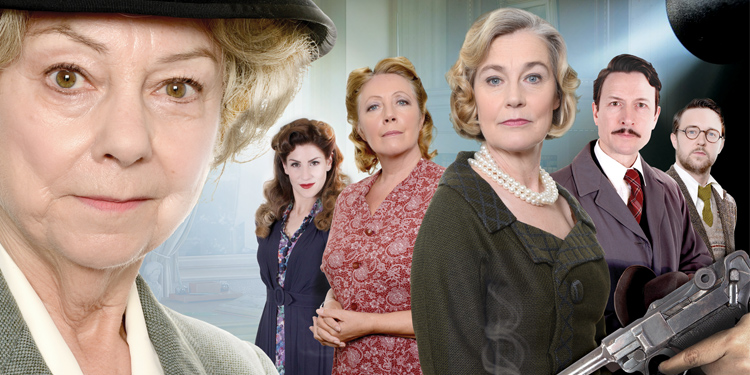 When I was young, I was a huge Agatha Christie fan and had read virtually all of her books.  I would imagine that ‘A Murder Is Announced’ was one of them, but fortunately, after all this time, I had completely forgotten the plot and ending!  Without giving any spoilers, Agatha Christie provides her usual twist at the end that you would not have seen coming.  I certainly didn’t guess ‘whodunnit’!

This production of ‘A Murder is Announced ‘ is by Middle Ground Theatre Company, a company co-founded by Michael Lunney, the director and designer of the play.  Middle Ground are one of the leading productions companies for plays and their track record includes ‘The Verdict’, The Importance of Being Earnest’ and ‘Dial M For Murder’.

The adaptation is by Leslie Darbon and there is an excellent cast, almost all of which are well known from TV roles as well as stage roles.  For example, Miss Marple is played by Sarah Thomas, best known for playing Glenda in Last of the Summer Wine, Letitia Blackstock is played by Barbara Wilshere, who has been in East Enders, Holby City and Judge John Deed to name but a few, and Dora Bunner is played by Karen Drury, who is most famous for playing Susannah Farnham in Brookside. There is only one set, comprising comfortable chairs and other seating.   There are two acts but each act is divided into scenes, and the curtains drop at the end of each scene and act.   This allows the audience plenty of breaks to speculate as to their various theories about the case.  In the break between acts, all I could hear were people talking about who they thought had done it and why!

The action is set in a house called ‘Little Paddocks’, owned by Letitia (‘Letty’) Blackstock and located in a village called Chipping Cleghorn.  The characters are shocked by a notice in the newspaper of Chipping Cleghorn, The Gazette, announcing that a murder will take place at Little Paddocks on Friday 13th October at 6.30pm.  However, Letitia continues unphased and prepares for guests that evening along with Mitzi her cook, hilariously played by Lydia Piechowiak.  The guests are unable to resist attending and, sure enough, at 6.30pm the lights go out and a gun is fired.  The gunfire scene is brilliant staged and is probably the most dramatic part of the entire play. Subsequently, Miss Marple joins the proceeding, and attempts to unravel the complex relationships and series of events which follow.

Act 2 was extremely exciting as the play reached its denouement.  This saw a number of revelations which took everyone by surprise. As I left the theatre, I still had doubts as to whether I had interpreted the ending correctly and had to check the conclusion in Wikipaedia!  The sign of an excellent whodunnit is to keep the audience guessing to the very end and this play certainly does that.  I cannot recommend ‘A Murder Is Announced’ too highly.  Don’t miss it!

‘A MURDER IS ANNOUNCED’ IS SHOWING AT THE NEW THEATRE, CARDIFF UNTIL SATURDAY 15 FEBRUARY 2020.