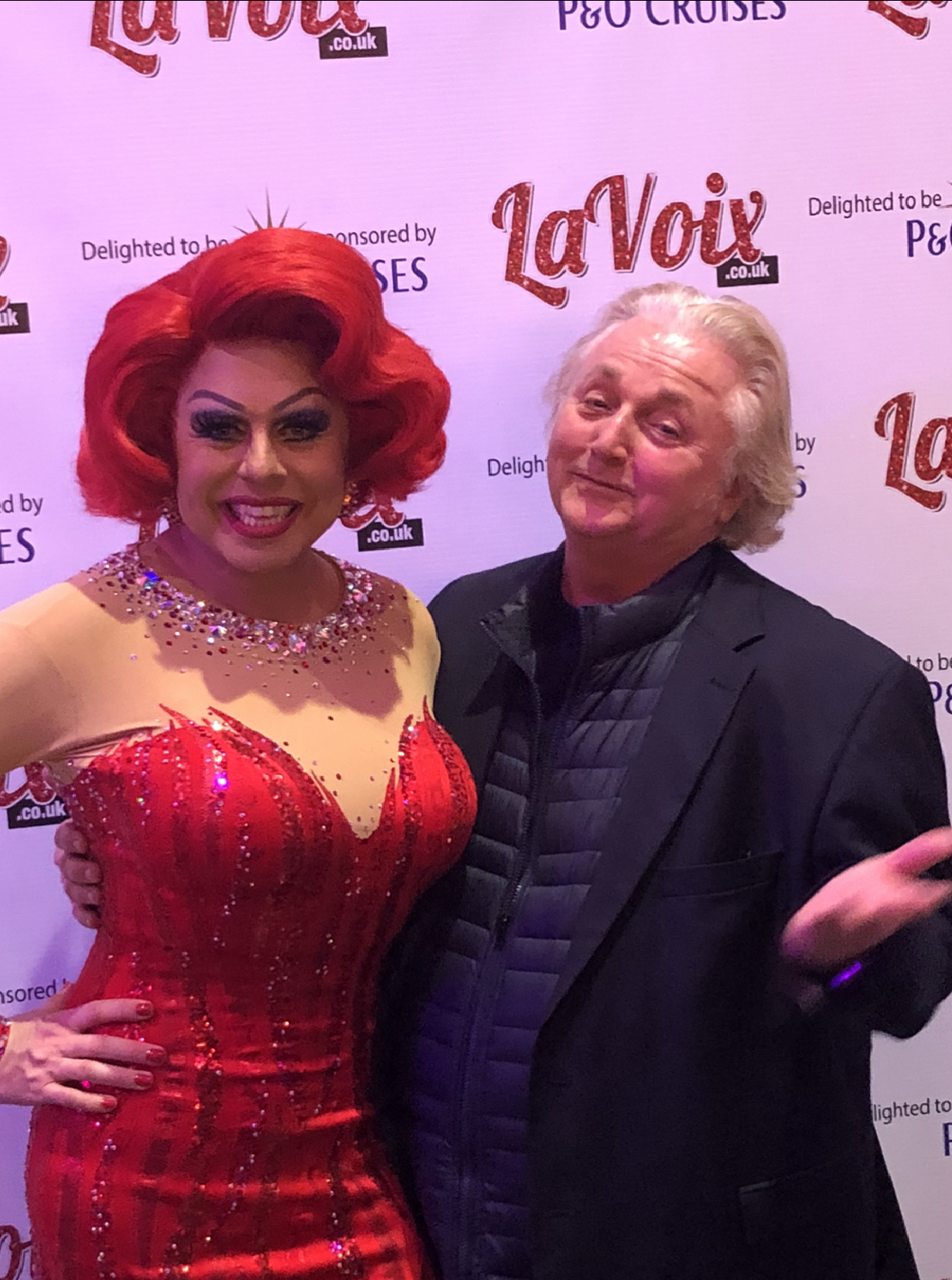 La Voix is a supreme drag queen with striking red hair.  She effortlessly manages to tick the four boxes that make her a ‘quadruple threat’ of drag.  She is a fantastic singer, an amazing stand-up comic and impressionist and she always looks incredible!  She first came to national awareness through her performances on Britain’s Got Talent in 2014 and this led to Jennifer Saunders casting her in the Absolutely Fabulous Movie in 2016.  Since then, her popularity has escalated and her diary is booked a year in advance.  I was lucky enough to be invited to attend the opening night of her new show, ‘The UK’s Funniest Redhead’, a description given to her by none other than Prince Harry himself!   Those who attended the show were not disappointed!

I had not attended a show before at Cardiff’s Sherman Theatre, and what an excellent venue it is.  Many of the areas ‘movers and shakers’ were in attendance, including David Emanuel, who, of course, co-designed Princess Diana’s wedding dress.  David designed the amazing dress worn by La Voix in the finale.   The band came on stage first, a four piece band comprising a pianist, a keyboard player a drummer and a guitarist.  After warming up the crowd, the leading lady herself came on stage to rapturous applause to sing ‘This is Me’ from the Greatest Showman.  I’ve heard many drag queens sing this iconic song but none has surpassed La Voix.  This was followed by the first quite lengthy segment of stand-up comedy and this was the pattern for the evening; music (including musical impressions) separated by sequences of amazing comedy.  I am not going to give any spoilers here of the jokes, suffice to say you should listen out for the roasting of Oscar Pistorius!  I had seen La Voix 3 times prior to this show, and the jokes all seemed new and fresh to me.. There are also plenty of costume changes and 8 amazing dresses in total!

The next song was Petula Clark’s ‘Downtown’ with the word ‘Downtown’ being replaced by ‘Cardiff’.  La Voix managed to get the entire crown involved in singing this song.   The next song was the first of the musical impressions, and the target here was Cher.  La Voix’s  vocal impression and mannerisms as she sang ‘Walking in Memphis’ were excellent.   The next musical sequence was one of my highspots and saw La Voix mimicking Judy Garland singing ‘Memory’ from Cats (dressed like Rebel Wilson in a cat suit)!  ‘Memory’ links into ‘Over the Rainbow’ at the end.   Then we had the inevitable Shirley Bassey impression as La Voix sang ‘I am what I am’.  Prince Harry is a big fan of La Voix’s Bassey impression and so was the Cardiff crowd.  Then followed the break, which everyone definitely needed.  During the break, I could hear people recounting some of La Voix’s jokes with lots of hysterical laughter!

Part 2 started with ‘Putting on the Ritz’ with some amusing ‘tap dancing sequences’.  This was followed by one of her most well known impressions, Tina Turner, balancing a football between her thighs! She sang a medley of Tina’s songs, comprising ‘What’s Love Got To Do With It’, ‘River Deep Mountain High’ and, of course, ‘Proud Mary’ and she had the audience in the palm of her hand. Next was a Whitney Houston segment, which was in two parts.  First we had an amazing rendition of ‘I will always love you’.  I first heard La Voix sing this at Eden for Birmingham Pride and was so impressed.  I normally cringe when drag queens sing Whitney, particularly when they sing the song an octave lower, but La Voix is one of the few drag queens that can sing this song, and she does so brilliantly. Then we had a medley of uptempo Whitney songs comprising ‘How Will I Know’, ‘I Wanna Dance With Somebody’, ‘Higher Love’ and ‘So Emotional’.

Then followed the presentation of La Voix’s ‘Red Ring’ and a guest appearance from the popular Merch (Merchandise) Steve.

The penultimate song of the night was ‘New York New York’, by which time the crowd was at fever pitch and most were singing along.  La Voix had already told us that there would be one more song so nobody left their seat while La Voix undertook her final change into the amazing dress designed by David Emanuel.  The show closed with La Voix’s audience participation version of Bonnie Tyler’s ‘Total Eclipse of the Heart’.  We all had to stand up and practice ‘turning around’ at the appropriate parts of the song.  It was great fun and a perfect way to end the show.

If you have never seen a La Voix show, you should try and rectify this is soon as possible.  La Voix is FAB-U-LOUS!