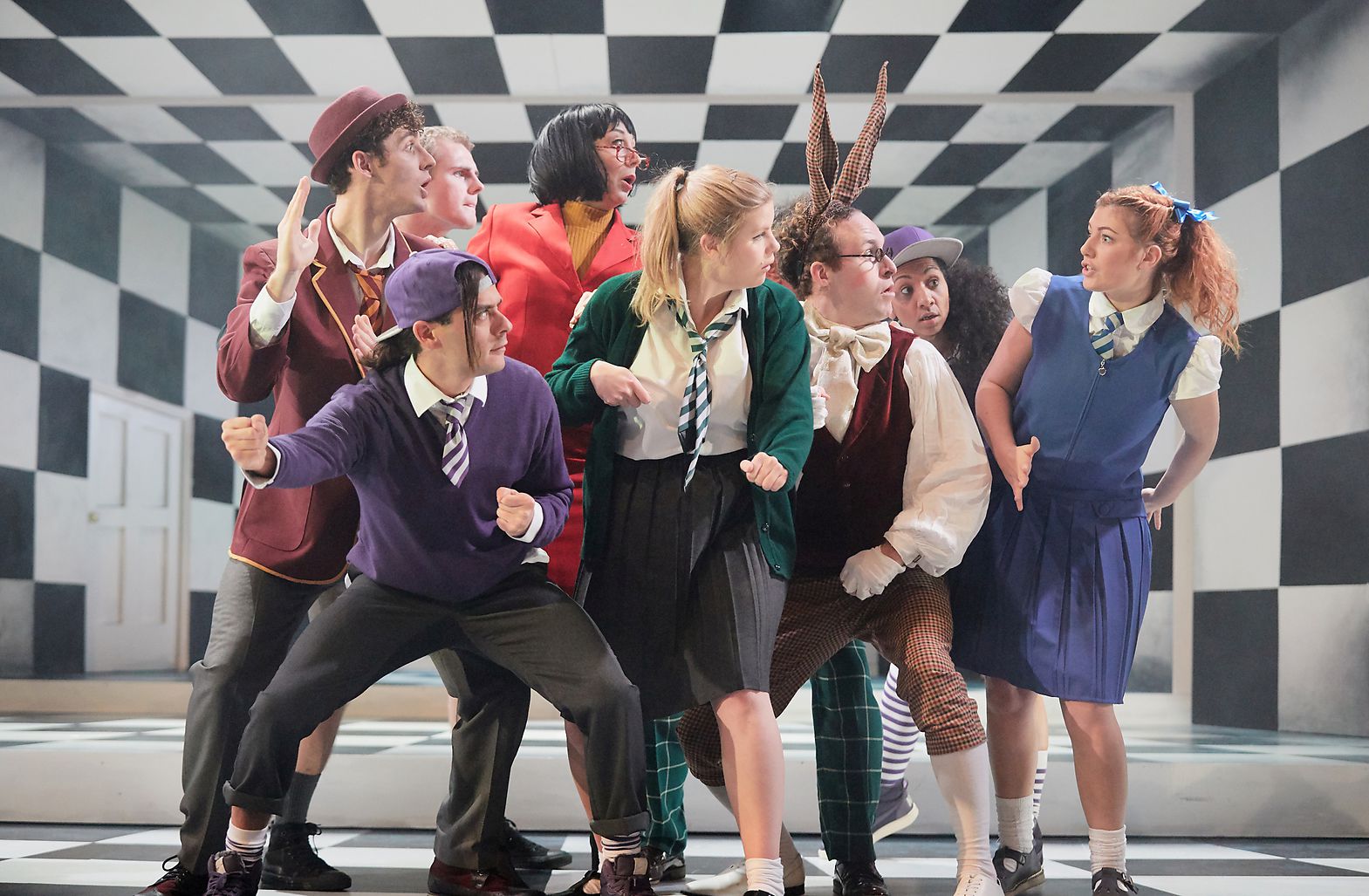 The classical story of Alice in Wonderland has been retold in so many weird and wonderful ways, we jumped at the chance to take the children to see the latest adaptation at the Sherman Theatre.

Sherman Theatre became the first in Wales to win the Regional Theatre of the Year title at The Stage Awards, recognising the Sherman as the most exciting theatre in the UK, outside of London. As we entered the theatre with a tinge of excitement a warm open planned foyer was awaiting, with soft lighting and props hanging across the ceiling paying homage to the show.

Based on the much-loved book by Lewis Carroll, which remarkably dates back to 1865, the story tells of a young girl called Alice who disappears down a rabbit hole to a fantastic place of bizarre adventures. There’s a modern twist to this tale however, and we liked this version better than the original (sorry Lewis Carroll).  Adapted by Mike Kenny, the story begins on the morning of Alice’s school exams. Kieron Self, well known for parts as the Dentist in ‘My Family’ and the Policeman in ‘High Hopes’, plays Alice’s father and is fussing and worrying frantically how she’ll do on this important day.  Will she pass? What will her future be? Will this open new doors? Will she be happy? What if she fails?  Does she or doesn’t she need breakfast? Elin Phillips is Alice’s sister and doesn’t understand what all the fuss is about.  Playing the role of Alice is Elian West. The two sisters couldn’t be any more different if they tried. These exams mean everything to Alice!

Alice escapes the frantic fuss at home and makes her way to school with Callum Davies, a school friend, who is hysterical to watch being 6 feet tall in a little boys uniform.  She is then confronted by two unruly school children. These naughty characters bounce off each other which leads to more mischief as the story unfolds. Played by Francois Pandolfo and Alexandria Riley the terrible duo set the scene as they later play Tweedledee and Tweedledum with so much attitude they make even Simon Cowell seem angelic.  Francois Pandolfo also performs the campest King I’ve ever seen. He definitely was one to watch. As was Hannah Mcpake who played the Headmistress of the school, and later in the play transformed into the Queen of Hearts. She did the funniest poses as the Queen, and chasing the cast around the stage threatening to cut off their heads just made us giggle more.

The intimate setting of the theatre and the atmosphere was filled with so much warmth. These actors didn’t need fancy props to enhance their performance; they were so talented, with many switching from acting to playing the piano, cello, guitar, trumpet, drum, accordion and recorder effortlessly.  In particular, Joseph Tweedale, who gave an energetic performance as the twitchy White Rabbit, while at the same time switching seamlessly to play various brass instruments when required. Kieron Self played the funniest, loudest, woman called the Duchess who happened to loathe children. The annoying song ‘wha wha wha wha’ which he and the rest of the cast performed will never leave my memory.

James Ifan as the Mad Hatter was completely outrageous, especially with his oversized cocktail glass that was bigger than a fish bowl. I want one for Christmas! Lastly, Elian West as Alice gave an outstanding performance as a strong, intelligent and courageous girl with a voice as beautiful as her character.

Full credit to Rachel O’Riordan who directed the amazing ensemble cast of nine, whilst Lucy Rivers did a brilliant job leading the music. The stage was set out like an optical illusion with each section being utilised superbly by the cast. Half way through the play the stage opens out magically which was visually mind blowing.

I really have a new found love for smaller settings because the quality of acting felt more up close and personal. From the costumes, to the stage set, to the music and most of all the acting, thank you for an absolutely crazy, outrageous, brilliant and most of all memorable night.

The show runs until the 29th December

Running time is 1 hour and 40 mins