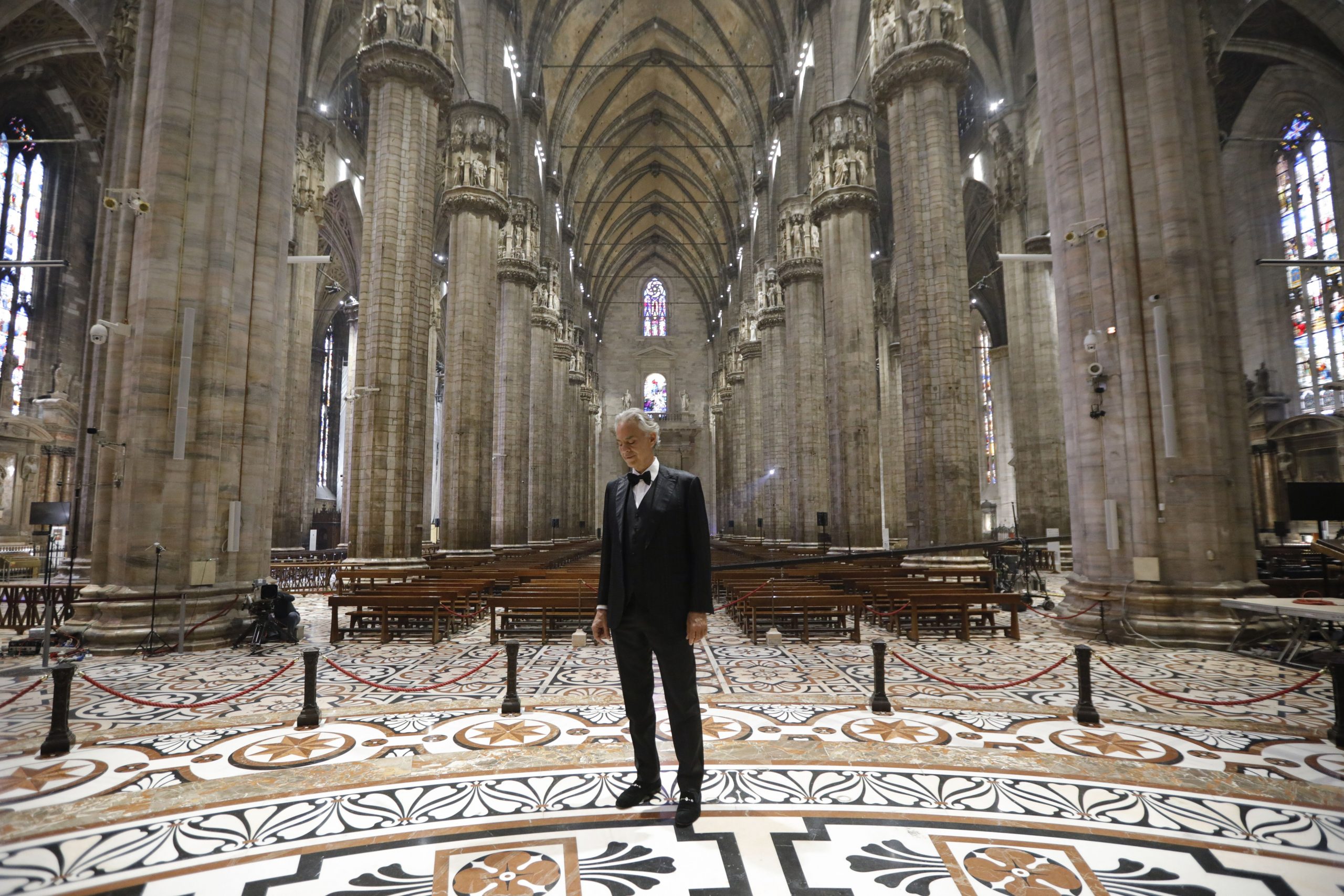 On Easter Sunday (April 12), in a moment that made the world stand still, Italian tenor Andrea Bocelli broke multiple records with an emotionally-charged solo performance, streamed exclusively live via YouTube from the Duomo in Milan.

This historic event reached over 2.8 million peak concurrent viewers, making it one of the biggest musical live stream performances of all-time and the largest simultaneous audience for a classical live stream in YouTube history. The video received more than 28 million views from across the globe in its first 24 hours. Even prior to the stream beginning, more than 1 million viewers were present in the waiting room, in anticipation of the performance.

Bocelli’s extraordinary ‘Music For Hope’ performance has since been covered in more than 100 countries worldwide, and continues to trend globally across YouTube and social media platforms. During the past 48 hours, it reached #1 Trending on YouTube across U.S., U.K., Italy, Canada and throughout Latin America, including Mexico, Spain, Argentina, Bolivia, Chile, Colombia Costa Rica, Dominican Republic, Ecuador, Guatemala, Honduras, Panamá, Peru, Paraguay, Uruguay, Nicaragua and Brazil.

These staggering figures make this event the biggest live-streamed classical music event of all time, as millions of all-ages and backgrounds, joined together remotely around the world for this special 30-minute Easter Sunday broadcast. The performance has now been viewed in excess of 35 million times since Sunday evening.

The event was a moving delivery of an inspiring programme of sacred music, amid the stillness of a city under continued lockdown. But behind the scenes it was a remarkable technical feat to film and record the concert within the restrictions, as well as the time pressure to make the audio and footage available for access immediately afterwards. The aim was to deliver an uplifting message of love, healing and hope to the public through music, at a time when it was most needed – and it did just that. The recording was released digitally on audio streaming services within hours.

Andrea Bocelli explains: “I am moved and delighted to have received such an overwhelming reaction, that has gone beyond our highest expectations. For an artist, yesterday’s event is the reason for the sacrifices of a lifetime; for a believer and a Catholic as I am, it was further confirmation of the benevolent smile with which the Heavenly Father looks to his children. It was an immeasurable honour and privilege to lend my voice to the prayers of millions of people, gathered in a single embrace – a small, great miracle of which the whole world was the protagonist and which confirms my optimism about the future of our planet.  Thanks to everyone who worked in the shadows for weeks, from management to the record label, and especially to all of those who have shared this moment with us, to stay truly united.”

Accompanied only by the organist, Emanuele Vianelli, Bocelli sang a carefully chosen selection of pieces, specially arranged for solo voice and organ for the occasion. This included the beloved Bach/Gounod setting of Ave Maria and Franck’s Panis Angelicus. Bocelli brought the stirring recital to a close with Amazing Grace, for which he was shown making his way out of the cathedral, in silence, and onto the steps facing a totally deserted piazza – an unprecedented sight for the national and international landmark – to sing the first verse completely unaccompanied. This was a moment of unforgettable poignancy.

“Music has the power to unite communities from around the world in the most unique and momentous ways. In such an unprecedented time, it’s critical we rally together and continue connecting through music. YouTube is honored to have played a role in making sure the world could to come together, as one music family, to see, hear and listen to Andrea Bocelli’s performance on such a historic day in time,” said Lyor Cohen, YouTube’s Global Head of Music.

Dickon Stainer, President and CEO of Global Classics & Jazz, Universal Music Group, commented: “On Sunday, the music of Andrea Bocelli provided a balm to the soul of the world. The event was a demonstration of remarkable teamwork. Universal Music and Decca Records are honoured to have played our part.”

“The success of ‘Music for Hope’ demonstrates the desire that everybody in the world has today to share a moment of prayer and hope. Andrea’s voice has become an opportunity for all of the world to embrace in this difficult time. No barriers, but bridges of human love and solidarity. This is the essence of Sunday’s event,” said Filippo Sugar, President of Sugar Music.

Maverick Management’s Francesco Pasquero and Scott Rodger added: “Andrea Bocelli has shown that during this global crisis the power of his voice has the ability to unite people, regardless of faith or background, in solidarity with his message of hope. This project has been an extraordinary coming together of the key collaborators in Andrea’s world across his wife Veronica and his family, management, labels, and YouTube, showing that by acting as one the music community will get though these challenging times.”

The event, which was by invitation of the City and of the cathedral, was promoted by the City of Milan and the Veneranda Fabbrica del Duomo, produced by Sugar Music, Universal Music Group & Decca Records, thanks to the generous contribution of YouTube. Andrea Bocelli’s participation was entirely pro-bono (in collaboration with Almud and Maverick Management).

Bocelli, with the Foundation that carries his name, is currently involved in an emergency COVID-19 campaign. The Andrea Bocelli Foundation (ABF) has started a fundraiser to help hospitals purchase all the instruments and equipment necessary to protect their medical staff. It is possible to donate through the GoFundMe campaign: https://www.gofundme.com/f/wk67wc-abfxcamerino or by contacting the Andrea Bocelli Foundation, by writing to [email protected]andreabocellifoundation.org.