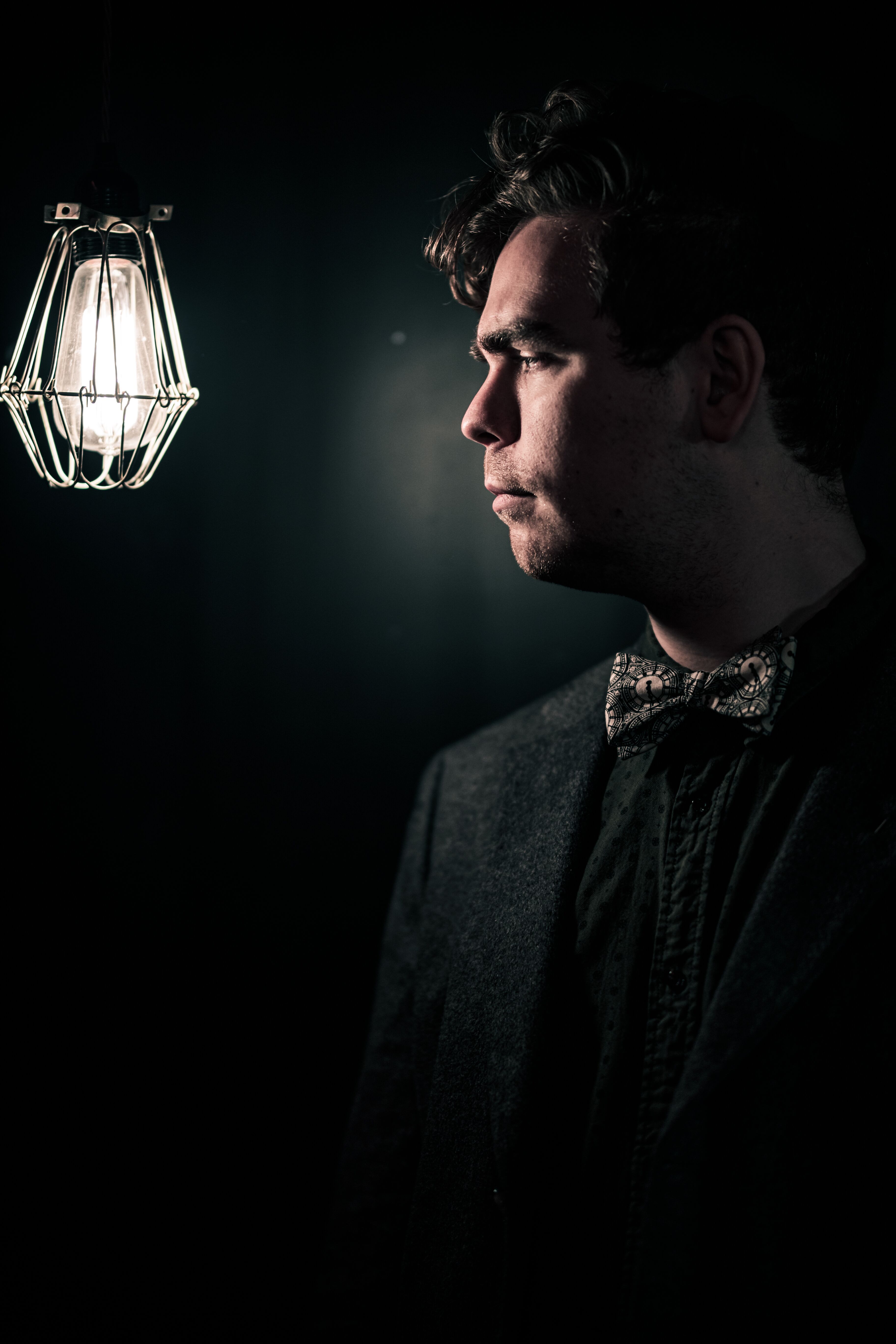 Angus Munro is one of the best singer-songwriters I have ever seen. I had the pleasure of attending his concert at the Troubadour in London on 24 October and he blew me away with his talent. Accompanied by an excellent band and backing singers, he sang 15 songs, most of which he had written himself but with 2 great covers, ‘Everybody’s Got To Learn Sometime’, first released by the Korgis in 1980, and ‘Every Day I Write The Book’, first released by Elvis Costello in 1983. Angus has released two EPs so far, ‘Shooting First’ and ‘Mirror Man’, and the latter contains his amazing new single, ‘Equaliza’, which is, uniquely, a song about the antidepressant, Citalopram. I spoke to Angus before the concert about his music and his mental health battles.

What made you write a song about Citalopram?

At the time I was going through a pretty bad one-sided break up. I had a relationship with someone who I loved very dearly but she didn’t feel the same way. At the same time I was figuring out that I had depression which needed to be medicated. One of the drugs I was prescribed after months of therapy was citalopram, so I started taking a large dosage of it. I soon felt myself balance out and start thinking properly. And I started to feel more comfortable with myself; feeling sad and feeling happy and not second-guessing things. And then I started to liken it to being in a relationship, like eventually I’ll have to wean myself off this stuff. If I wasn’t on citalopram all the time, I would be a mess. And I was likening it to needing this person in my life. So I put two and two together and decided I wanted to write a love song where the love interest is actually a female/male personification of antidepressants. And that you needed this in order to function. It was just the catalyst to write a ballad song. And I really like the melody. I had the melody already, I just really wanted to write about something that meant a lot to me.

Do any of your other songs deal with mental health issues?

Yes and No. There’s a nice ambiguous answer for you! I like writing stories. I like putting characters in really difficult situations and figuring out how they would get themselves out of the situation mentally. One of my favourite writers of all time is Randy Newman; he pretty much invented the idea of the unreliable narrator. He would have a character who was ridiculous like in ‘Short People’. Nobody hates short people that much but it makes for a really interesting pop song. As with most songs, there is a bit of myself in everything but its not 100% me all the time, apart from ‘Equaliza’, which is definitely me.

Although way before your time, I can hear elements of the British rock band, Squeeze in your songs. Were you influenced by Squeeze?

I love Squeeze and yes they were an influence. ‘Up the Junction’ and ‘Cool for Cats’ both mean a lot to me. It’s those chord shapes I really resonate with as they are very ‘theatrical’. Like Randy Newman, who was influenced by Tin Pan Alley, there’s elements of this in Squeeze’s songs and mine also. Those chord shapes really lend themselves to writing on a piano and I’d like to think I translate that when I write songs.

How excited are you about playing in Cardiff and have you ever been to Cardiff or Wales before?

Very much so! I’ve never been to Wales but it’s been on my bucket list to do so. I really like the idea of Acapela Studios. Playing in a church with just a piano on stage; it sounds really fun. One of my favourite live gigs was Randy Newman in St Luke’s Cathedral in London. I am really excited just to strip down these songs and perform them with just my voice and a piano. I think hearing the songs stripped down, compared with the recorded versions, well they will be two very different creatures. Anyone coming along to see me at Acapela will be getting something which they can’t actually get from the records.

How and when did you get into songwriting and performing?

When I was a kid I would always perform. I was one of those kids who was bitten by the bug, who was always writing songs. Disney movies really resonated with me as a kid, especially those by Alan Menken and Howard Ashman, who took the idea of a broadway musical and condensed it for children to make a really emotional story, which appealed to adults as well as kids. Those songs, such as those from ‘Little Shop of Horrors’, are amazing. So it was Disney up to the age of 10. From the age 10 onwards, my dad was a big influence on me musically. He was really into music although he wasn’t necessarily musical. And he would try to teach me about all the vinyl records he had. He was really into hard rock and metal, but the record I picked out was ‘Songs for Swingin’ Lovers’ by Frank Sinatra. My Dad was mortified as this wasn’t hardcore; it wasn’t Led Zeppelin! I loved Sinatra’s voice and the idea that somebody could take a Tin Pan Alley song and interpret the lyrics in a certain way which would allow people to get into it. So after the age of 10, my interests were in jazz, musical theatre and sophisticated pop artists such as Sting, Katy Melua and Madeleine Peyroux. I also had an interest in cartoon theme songs, where you have to get your point across in a minute and 30 seconds. You’ve gotta hook the person who’s watching to get that tune in their heads so they come back and watch the TV show. I was fascinated with the music and how it could hook someone into a show. I was invested in how to create that magic myself, even though I didn’t know how to play a piano or guitar at that stage.

I used to do puppets as a kid. I have an older sister and a younger sister and I used to entertain them with my puppet shows. The voices I would choose were very high and I feel that is something to do with the fact that I have a large range vocally.

Did you suffer from bullying at school and why do you think that was?

I had some health issues as a child; I had Glue Ear by the age of 3, which led to me being unable to walk, talk and communicate. I was later diagnosed with dyspraxia, a developmental, coordination disorder. I’m just naturally clumsy. I was very lucky to have a helper at primary school who taught me again how to walk and catch a ball. I was surrounded by loving classmates in primary school but I would still act up for attention. It was the only thing I knew how to do. So when this continued into high school, I would get beaten up a lot. I’m not saying I’m at fault, I just recognise that I was acting up because I would have extremely high anxiety as to how I should be and as to whether I was liked by my classmates. I remain awkward and clumsy but I’ve learnt to embrace my awkwardness. It’s part of who I am.

How do you write a song? Do you start with an idea, with the lyrics or the music?

I write down ideas in a notepad. I also record ideas on my phone. If I’m in a place where there’s a piano, I’ll use that for ideas. When I come to write seriously, I’ll treat it like a day job, sit down at the piano and just work out the song. 9 times out of 10, it won’t lead to a song I can use, but 10 per cent of the time it will. And one day I’ll show up and write a song in 10 minutes, as I did with ‘Shooting First’ from my first EP of the same name.

Can you explain your Scottish links?

My mother was born in Troon, Scotland. My father was born in Trieste in Italy but his dad was Scottish and he moved there when he was younger and never moved back. Although they spent some time in London, they moved back to Scotland and I grew up there. There’s something about Scottish people which you can’t find anywhere else. I’ll always be a Glasgow guy but I live in Edinburgh now, although I may move back to London in the future.

You’ve explained what ‘Equaliza’ is about, can you explain a little about the other 3 videos you have released, ‘Mirror Man’, ‘Shooting First’ and ‘Bleeding Out’?

‘Mirror Man’ is about my dad. My dad was my best friend and he suffered from depression which, unfortunately, led him to take his own life. I did a gig the night before at King Tuts and my dad came along and he seemed fine. But then the next day I got the phone call. Later on, I decided to write ‘Mirror Man’ as a tribute to him. The concept behind the song is that I look a lot like my dad and I’m reminded of him when I see myself in the mirror. This is a blessing and a curse; a blessing because he was a legend and I love him and a curse because he’s not here.

‘Shooting First’ was written after an argument with two friends. I came home feeling annoyed and had this country song idea. Bang! 10 minutes later and it was written!

‘Bleeding Out’ is, like the rest of the Mirror Man EP, about dealing with loss. In this case, the song is about going to a punk rock or death metal gig and thrashing around and smashing stuff to deal with loss in a very physical way. It’s very tongue in cheek but at the same time the message is sincere. There’s so many ways to recover and live through loss and going to a gig is one of them.

What are your future plans?

I have written another record which will be released next year. I have written the piano demos, I just need to get them arranged, produced and recorded. Then there will hopefully be some more gigs to support the new record. As for this year, after the Acapela gig, I have a gig in Inverness on 15 November.