Art to mark a century at Rookwood Hospital

Artwork has been recently unveiled as part of celebrations to mark a century since the opening of the Rookwood Hospital in Cardiff and as part of the NHS at 70. 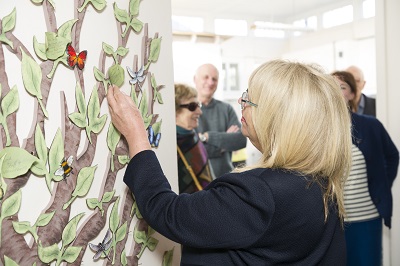 Rookwood was built in 1886 by the late Colonel Sir Edward Hill as his home, and subsequently Lady Hill, lived there until 1917. In 1918, it was taken over for use as a convalescence home.

To celebrate a century of caring for people and keeping people well, a number of artists have been commissioned. 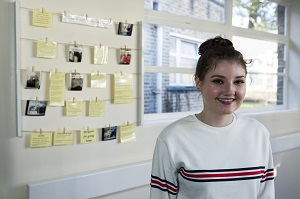 Regan Paddock, a patient who had been at Rookwood following a car accident, wrote a poem about the Superheroes of Rookwood, penned for the staff that looked after her.

Regan tells us her story: “I was an A-Level student, I was really social, I went to parties, I went shopping with my friends. I was also a proper family girl too.

“On the 10 February 2017 me and my friends were going to a barn dance, and the boy who was giving us a lift had been driving for just over a week. Me and some of my friends were in the car and I was in the front. We were driving around country lanes to get to the party and we went through a fence and into brook and landed on the nose of the car. Me and my best friends suffered really bad brain injuries.

“They had to get the fire engines to cut us out because the car was so badly smashed up. So we were in the car for about two hours before we were out. Then comas followed. I was so disorientated wherever I went so I had to get used to a whole new place and my memory is so bad from my brain injury that I can’t remember where I was. I just woke up and couldn’t remember where I was. I had to get used to it all over again.

“I felt looked after and cared for by staff on the wards. It’s not just a patient/nurse relationship, I’ve created more than that with some of them, like a friendship. They look after me and care about how I feel.

“I just look upon the ward like a different place now. I went from a really low place at one point, but now I realise I’m actually really lucky to be where I am today. Thanks to the support of all the people around me and my therapists and nurses, I wouldn’t be in the place I am now and I’m so very grateful.” 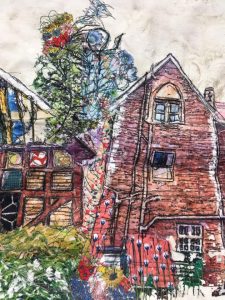 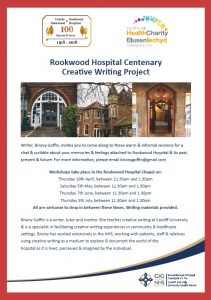 Artist Haf Weighton, was commissioned to create a tapestry of the building, who said the experience had made her look at the building through new eyes.

“I’m from Cardiff, so I know of the hospital, I went to school at Ysgol Gyfun Gymraeg Glantaf which is just around the corner but I didn’t really know much about it before.

“It’s a beautiful building – there is a lot of colourful tiles outside and inside the building.

“I had so much input from those working at the hospital, in the end, I created three separate pictures rather than just one.

“I create pictures that are not exact copies of buildings – they are more of an interpretation about the feeling of the building.

“There is a bell in the reception area of the hospital which a community in Porthcawl donated, all the staff recognise this bell so it’s important that it was included in the artwork.

“I create tapestries, I use stitch, but also print and paint, a mix of different materials.

“The one that Rookwood has on display is a metre and a half long, so it’s really big.”

“As part of the commission, I visited Ysgol Gyfun Gymraeg Glantaf and did a workshop with their students based on Rookwood.

“One of the three pieces in this series went on show at The National Knitting and Stitching Show in Kensington Olympia as it was shortlisted for the National Contemporary Embroidery Piece of the Year.”

It is a busy time for Haf at present, as some of her works will be on display at the Saatchi Gallery in London running from 20 March until 1 April.

Maria Battle, Chair of Cardiff and Vale University Health Board attended the event and said: “I was delighted to be able to go along to Rookwood to meet everyone who contributed to the wonderful artwork and photos that are displayed around the hospital.

“The artwork and photos are bright, colourful and inspiring – which really helps to lift the spirits of patients and staff around the hospital, thank you to all of you for your input into this project.”