Pride Cymru’s Big Weekend 2018 will take place this weekend (24 -26 August 2018). The Big Weekend is a celebration of inclusivity and diversity, held annually by Pride Cymru. 40,000 people are expected to attend the event on Cardiff City Lawns over the weekend.

On Saturday 25 August, a parade will take place around the streets of Cardiff, which will see 10,000 people walk the mile-long route in the city centre. Families, individuals, groups and organisations all are welcome to join the parade to showcase the true diversity and equality across Wales.

Derrick Barry, Courtney Act, Saara Aalto and Gabrielle are amongst this year’s acts who will be performing.

Drag performer, Derrick Barry, is widely known for impersonating Britney Spears, competing in the third season of America’s Got Talent, and the eighth season of RuPaul’s Drag Race.

Saara Aalto is a Finnish singer who rose to fame when came second in The Voice Finland in 2012. She then went on to represent Finland in the Eurovision Song Contest in 2011 and in 2016, coming second both times.

Gabrielle is an English singer songwriter Gabrielle is best known for her 1990s singles Dreams and Going Nowhere.

Other performers include Flip & Fill, The Sundaes from BBC’s All Together Now, X Factor’s Saara Aalto and Laura Bannon from The Voice UK.

There will also be entertainment from Glee Comedy Club, a Cabaret Stage, a UV Roller Disco, a Bingo Lingo takeover and beach party. As well as this, there will be food and drink, market stalls and a family area at the event, which will run on August Bank Holiday weekend.

The theme for this year’s Big Weekend is #ProudToBeMe. The campaign aims to encourage members of the LGBT+ community and beyond to use their voice and be proud of their identity.

Scott Davies, Pride Cymru’s Big Weekend’s Event Director, said “This is the biggest event in our calendar, and we’re so pleased to bring the public such amazing and talented performers this year. We can’t wait to enjoy the weekend with our incredible community.”

In a speech at the campaign’s launch last month, Pride Cymru’s Chair, Lu Thomas, said “[Pride Cymru] reflects who we are as a community and as a nation. It is a celebration of equality, a commitment to ensure that everyone is able to live their lives free of hate.”

The full line-up and tickets are available at pridecymru.co.uk. 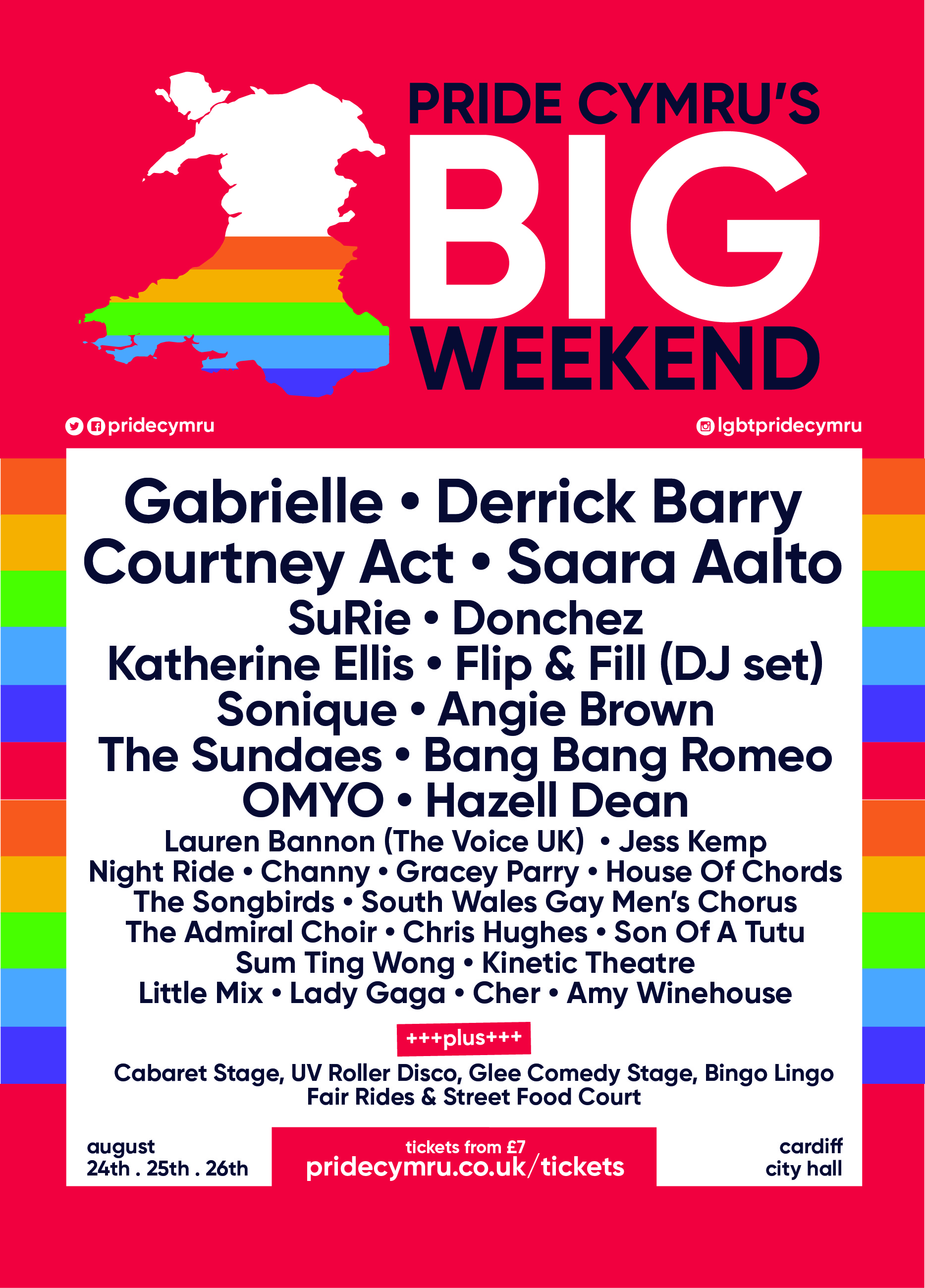