I had the pleasure of attending the first night of the BBC Radio 6 Festival, which was hosted in Cardiff this year. It felt truly amazing to be back in an impressive physical venue, crowded with delighted fans and blessed with incredible live performances. Lockdown attributed to asignificant quieting of the live music industry, so with the BBC Radio Festival back in full swing, it was an exciting time for not only those within the music industry (ie the presenters, musicians) but for the avid music listeners as well. There is undoubtedly a great adoration for diverse musical artistry in Cardiff, which is a melting pot for live gigs, events and club nights; they have always been a focal point for the capital’s nightlife. Over this weekend the Radio 6 Festival has been scattered around the most notorious music venues in Cardiff, such as the Tramshed, Student Union and St David’s Hall. True music fans really do appreciate when a radio station compiles and presents a diverse array of gifted musicians, making for an enthralling evening. 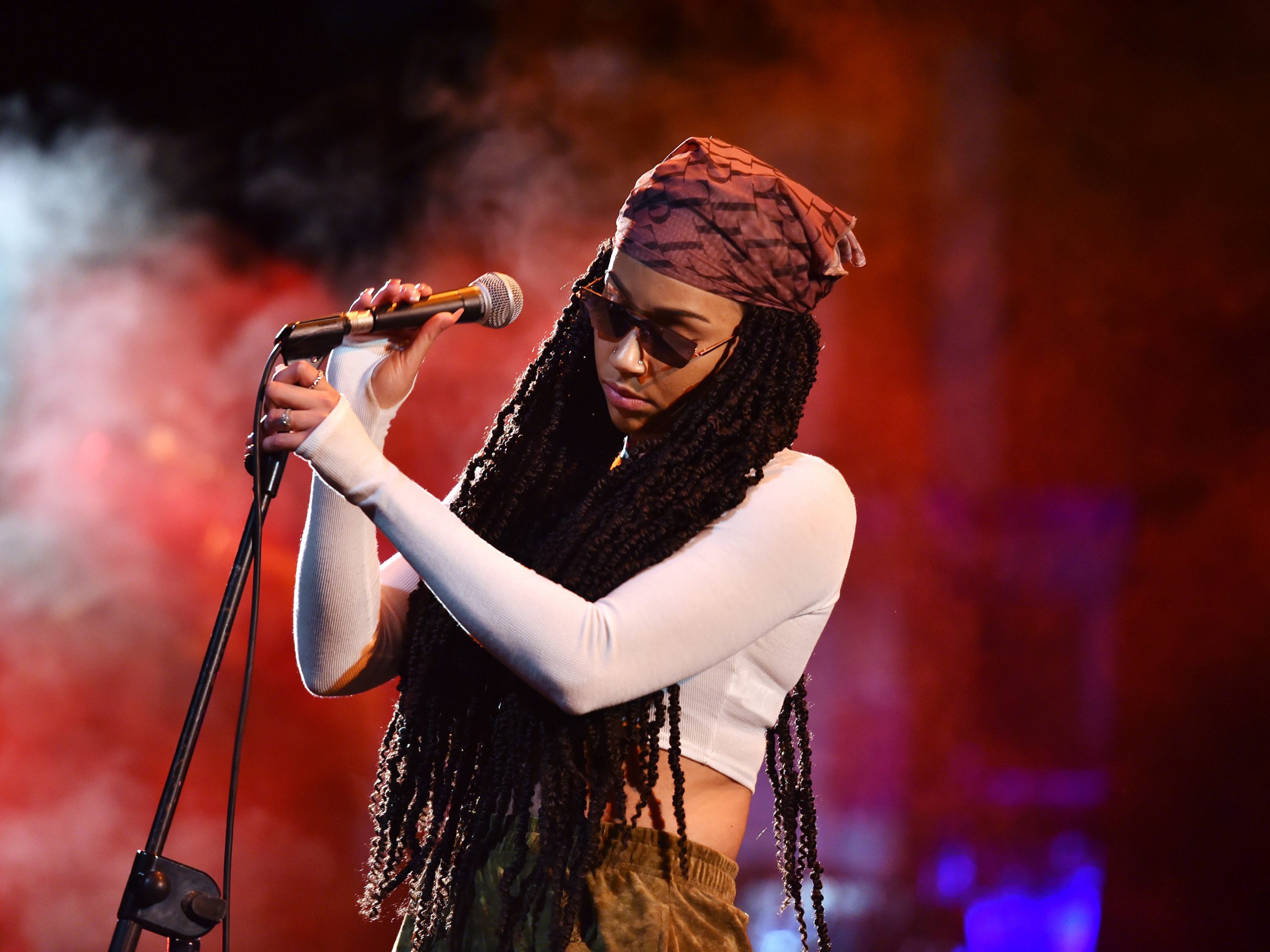 Fittingly, the first musician welcomed to the stage at the St David’s Hall was a local talent who goes by the name of Deyah. Deyah is a female rapper born and raised in the outskirts of Cardiff, however due to her Nigerian roots, she spent most of her childhood alternating between Cardiff and Nigeria. We see the celebration of her cultural heritage apparent within her music. Deyah’s story of her journey as a musician is greatly inspiring, much like her music. Growing up Deyah had always had a persuasion towards hip hop, however she stated she didn’t think the Welsh music scene really accommodated her needs. Deyah was able to record music for free thanks to her youth group ‘Urban Circle’, and since her first album ‘Care City’ released in 2020, of which she won the Welsh Music Prize, her career has taken off.

Deyah had a warming presence, and upon greeting the crowd and informing us of her connections to Wales, she revealed that she had attended the St David’s Hall many a time with her mum, so to be performing there was truly a full circle moment. Through each song she gave us a backstory as to why it was written, which I really appreciated, it added to the authenticity apparent within her music. One of my favourite songs was ‘Genesis’, which is a profound tribute to rehab, overcoming addiction and finding faith, and within the song Deyah engages in a monologue about ‘walking in peace with a spiritual sword.’ It was a lyrically rich yet melodic piece sung without fault, with the help of her two wonderful backing singers. Deyah also had some light- hearted songs, and explained the reasoning behind them in a humorous way, such as ‘Shoreditch’ of which she fittingly titled as such due to being ditched by her friends after a night out in London.

Deya’s studio work is generally composed of neo-soulful vocals, hip hop and rap. The rapper’s melancholic rap is blasé yet consoling, she had the unique ability to couple catchy melodic beats with hyper- personal hard hitting lyrics; for Deyah, music is a means of catharsis. Her mellow and expressive music touches upon themes such as loneliness, addiction, trauma, religion, and whilst she sings to the harsh reality of her days struggling, through music and expression it seems a new journey is just beginning. Overall she made for a fantastic first act of the evening. 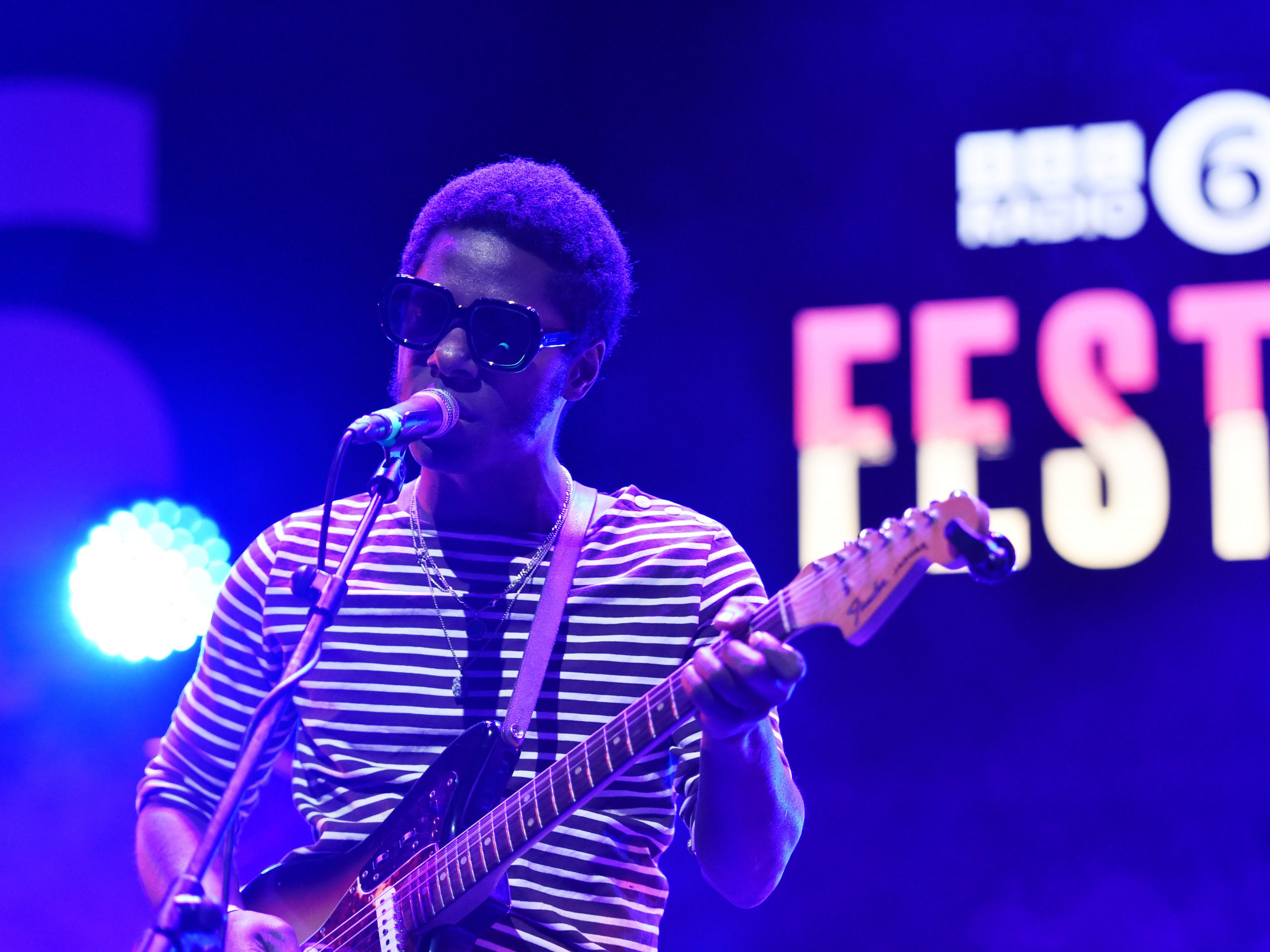 After the realistic nature of Deyah’s music, next on the line up we had the uplifting Curtis Harding, a Michigan born engineer turned gospel singer, who acquired his musical and vocal talent upon the attendance to his local church with his mother. At the heart of Curtis’ vocaland multi-instrumental music is the sentiments of his mother’s approach to life, who always encouraged him to lead with compassion and to ‘give flowers while I’m still here.’

Approaching the stage in flares trousers and funky boots, and accompanied by his groovy band, Curtis was certainly an effortlessly cool, calm and collected musician. Throughout Curtis Harding’s performance, what really stuck out for me was his contradictory musical ability. He was able to sing in a plethora of octaves, in keeping with a multitude of genres, namely soul, gospel, rhythmic blues, RnB and rock, but alongside his vocal talent, he was incredibly skillful on the tambourine, which he incorporated into his infectious dancing; he made everyone want to boogie.

Despite the performance being a little heavy on the drums, which drowned out not only Harding but the other musicians, Harding’s music was very well received by the audience, and everyone was up and dancing to his most famous single ‘Need Your Love’. He had an infectious energy which truly shone on everyone present that evening. Harding’s music had an uplifting and relaxing retro soul feel, It would have been impossible to come away from the music feeling anything other than calm. His thought provoking vintage soul and R&b sound brought comfort and peace into the music. It seems that the once was a backing artist for CeeLo Green, is now embarking on his own musical journey, and manages to retain his individuality through his non submission to any particular genre – a concurrent theme amongst all of the artists of the evening. 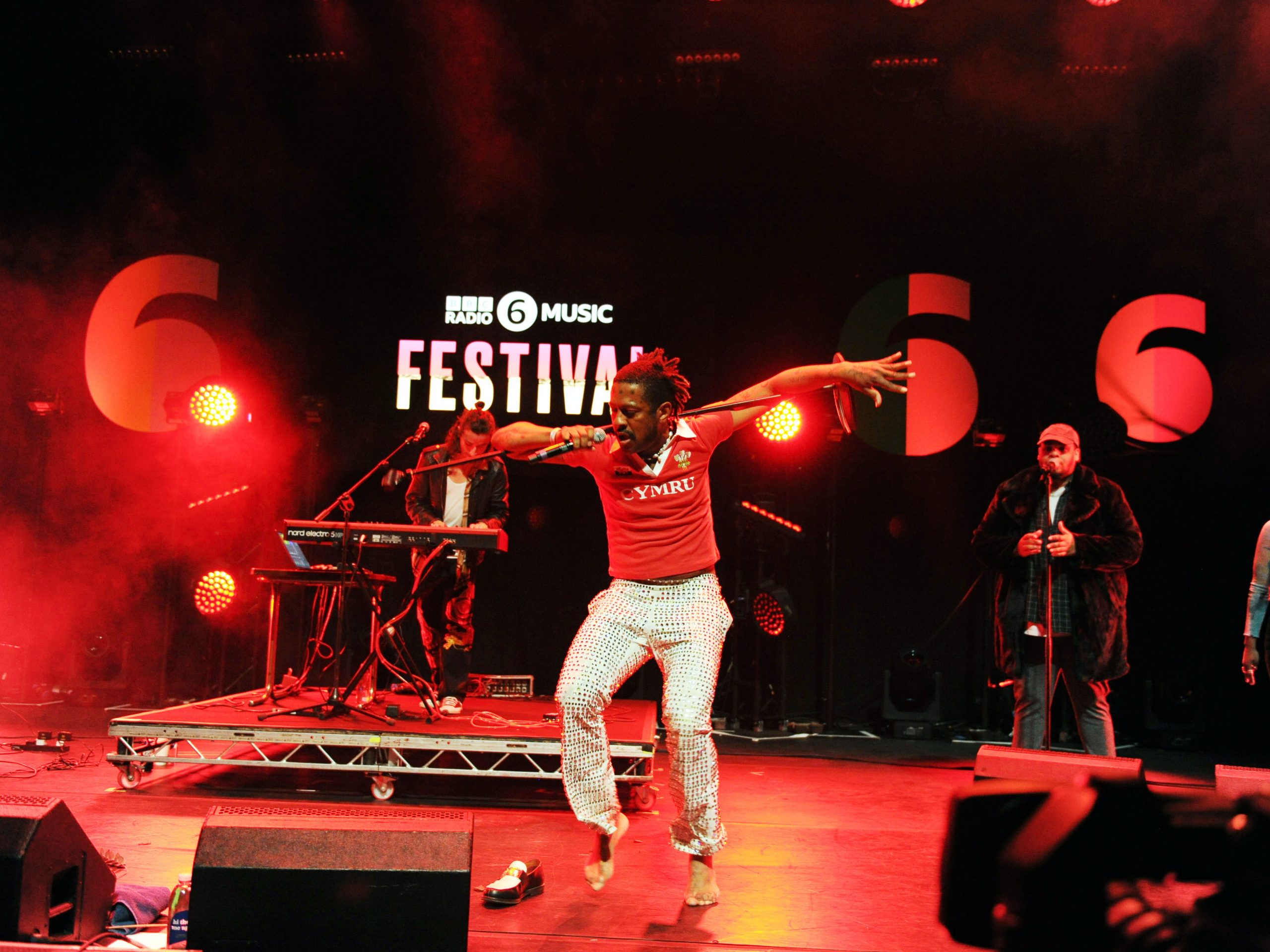 Now for the genre- defying Mykki Blanco! Mykki is an american rapper and a trailblazer for the nuanced queer rap genre, believed to have introduced a new element to the music industry, opening a sub genre of hiphop allowing for authentic self expression. He is grosslyexperimental with music – merging hip hop with trap sounds, subversive path within a genre associated with homophobia, transphobia etc. His career is greatly successful, having collaborated with the likes of Blood Orange and Kanye West. Mykki tends to rap honestly over trippy transcendental synthetics, and his songs have the cadence of spoken word. His music representes an alterntaive form of black culture that has been greatly recieved, admirably he oodes confidence despite the hardships he has faced, stating he is ‘black, queer, and hiv positive, but with no transgression against me as the hope I hold within’.

Walking onto the stage in a Welsh rugby shirt and eye-catching disco trousers, Mykki was greeted with an enthusiastic crowd. He exuded energy and vibrance, and theatrically proclaimed that ‘love is a message!’ He then proceeded to eloquently toss flowers to the crowd whilst showering us in positive affirmations; what an entrance. His performance had that of an all encompassing gospel feel, dotted with rhythmic music, inspiring monologues and immersive contemporary dance, he harboured the enviable ability to really ‘let go.’ He had the ability to turn his old song ‘i’m a loner’ into a positive message about self acceptance, the whole crowd echoed this line back to him. We all seemed to feel the lyrics, the room was filled with love and he managed to bring the crowd together not only through his music, but his energy. It was an uplifting and encapsulating performance. 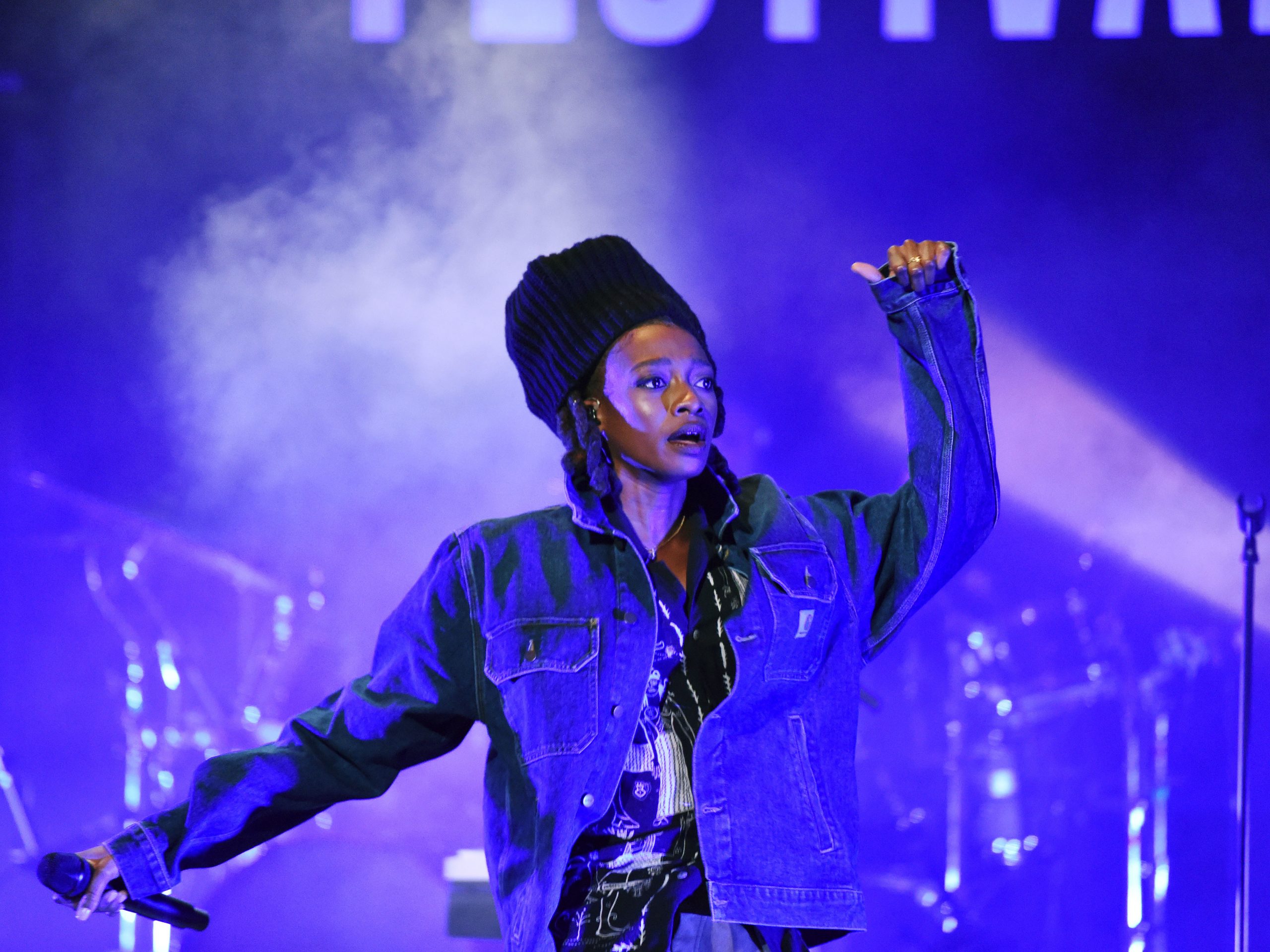 There was an incremental excitement moments before the final musician, Little Simz, was welcomed to the stage. Little Simz is a London based female hip/hop, rap and grime artist who has grown to immense popularity in recent years. Whilst she has had success with her earlier albums such as ‘GREY area’ (a personal favourite of mine) she really became the forefront of the public eye with 2021 release of the album ‘Sometimes I Might Be Introvert.’ After this release she soared from domestic to international fame, the album reached no4 in the uk official albums chart, and with almost 1.3 million loyal monthly listeners on Spotify, hats off to her.

Little Simz stands out from the crowd with her distinctive creative style, as she manages to incorporate loaded themes of womanhood, culture, race and family into her music, music which is idiosyncratic to the norm, but is nonetheless filled with vibrancy and authenticity. Her inventive rap music has grown in popularity and has been acclaimed with prizes such as Novello, NME, and Mercury nomination. The incredible singer performed many songs from her most recent album which has a transcendental effect, the crowd may have found it easy to be over stimulated by the different sounds and genres within her music, not to mention her distinctive vocals of which she embellished the music with.

Little Simz kicked off the performance with the first song from her new album ‘Introvert’, which is an orchestral and powerful ode to self acceptance and introversion. Throughout the concert Little Simz truly denied submission to one genre, the music style fit into her vision,rather than her voice fitting into the style, her approach to music is indicative of her multifaceted musical talent. She had the ability to transition from synthetic rock as done so in ‘Protect My Energy’, then taking us to North London for ‘101 FM’ whereby everyone was up and dancing. For this song she proceeded to dance with a woman in the crowd; the husband too wasn’t impressed. Her new song ‘Point and kill’ which is in collaboration with Obongjayar, was definitely the stand out performance, it harboured a contagious Afro – Beats feel making it impossible to stay in your seat. After seeing Little Simz live, she really is the ‘one woman army’ she proclaims to be.

The first night of the BBC Radio 6 Music Festival really showcased the new generation of music, styles, genres, blends’ and genders; it was refreshing to say the least. All the artist’s had a skillful way of using rhythmic beats and masterful lyrics to both acknowledge and overcome life’s struggles. Some did so through romanticism, some through realism; but everyone came away feeling something. I had no choice but to admire their sheer honesty of the artists, whose self acceptance and self confidence exuded through the crowd. Festivals such as these not only provide an opportunity to listen to successful and renowned artists already in the spotlight, but to provide a platform of recognition for up and coming talent; it’s a great opportunity for emerging artists to showcase what they are really about; I felt privileged to be part of such a immersive evening, and left with a spring in my step.