Bees: what’s all the buzz about? 11 bee facts you never knew 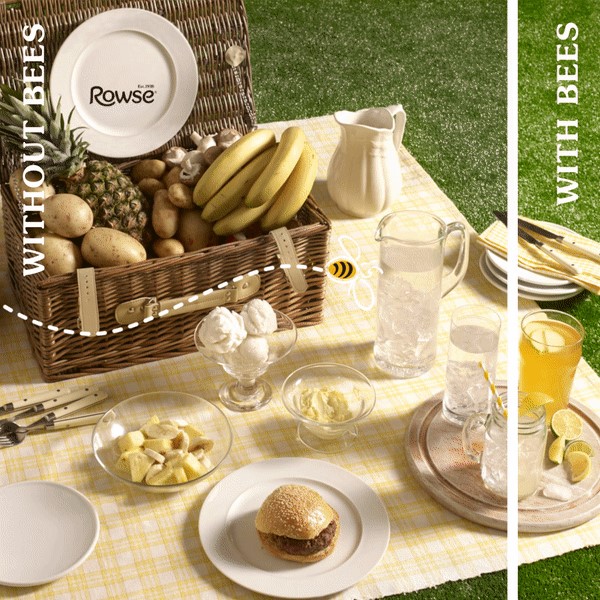 Bees are fascinating little creatures and the unsung heroes of the natural world. Thanks to them pollinating our plants, flowers and trees, we are able to enjoy our summertime favourites, including strawberries with cream, and cider. With so many plants and flowers blooming at this time of year, one bee species in particular – the honey bee – is also busy collecting nectar so they can feed themselves and make delicious honey for us to enjoy. But how much do you really know about these busy buzzing bees? Hives for Lives by the UK’s favourite honey brand, Rowse has listed 11 top facts about our favourite, the honey bee, that you and your friends just wouldn’t bee-lieve.

1. The number of British beehives has declined by nearly 75% over the last century1

Here’s the sting – the UK is missing nearly 40% of the beehives needed in order to future-proof honey sustainability. Honey bees nearly always need beekeepers to survive in the UK, so we rely on bee farmers to look after the bees that live in managed hives – but even then, bee farmer numbers have been dropping steadily in the UK for years. That’s why the Rowse and Bee Farmers Association’s world class apprenticeship scheme aims to help inspire, recruit and train the next generation of young British bee farmers.

2. Three out of four crops which produce food for us to eat are dependent on pollinators, like bees2

Why are bees important? Well, our diets are full of foods which depend on bee pollination. Breakfast as we know it would be completely different without trusty bees whose pollination contributes to producing coffee, fresh fruit and orange juice. Even meat and dairy products benefit from bee pollination as cattle often rely on insect pollinated plants, such as clover. Well-pollinated plants have also been found to produce larger, more uniform, tastier fruits and vegetables, so without proper plant pollination from the bees, this may result in misshaped or bland crops, or worse still, none!

3. A honey bee will make one 12th of a teaspoon of honey in its entire life

How many spoonfuls of honey do you enjoy on your porridge or in your smoothie? Well, just think for every teaspoon you consume, 12 bees will have worked hard to make it over their entire lifetime (which can last from 36 days in the height of summer to 3-4 months in winter). So, spare a thought for the hardworking honey bees when you’re next tucking in and enjoy every last drop!

4. Bees have been around for more than 30 million years
The symbiotic relationship between plants and bees is one that has long benefitted mankind. Plants need bees for pollination, which in turn benefits humans with the crops that are produced such as apples and blueberries. It is also believed that honey bees started creating excess honey for one main reason – for us to eat! Not forgetting the importance of beeswax to create candles. So, they’re clever little things that provide us with both sweetness and light. Aren’t we lucky?

5. Honey bees typically have a foraging radius of 3 miles
Three miles may not sound very far but imagine having to travel that distance to get food each time you were hungry! Nectar and pollen are the two main foods collected by honey bees – specifically the worker bees. Nectar is the major energy source which is converted into honey, whilst pollen is the source of protein.

Bee foraging distances are found to be dependent on the time of year and the type of forage. The lower the quality of forage nearer the hive, the further honey bees have to travel to collect nectar. The best forage attracts 100 times more pollinators than the worst, with a single honey bee typically visiting around 7,000 flowers a day!

To a layman’s eye, bees might all look similar but in fact there are hundreds of species in Britain alone – not all of which are pollinators. For example, the honey bee – in comparison to a bumblebee which is fatter and furrier – generally has a smaller, slimmer body and is the only bee species to produce excess delicious honey for us to enjoy.

Next time you’re out and about, have your eyes and ears peeled for the different bees to see which ones you can spot. The difference in species also determines the type of flowers and plants they like to visit. For example, Catmint is well-loved by bumblebees but less so by honey bees as the flower tube is a bit too long for their tongue to reach. But, vibrant flowers with a high nectar content, such as lavender and borage, are particularly attractive to honey bees.

7. There are three kinds of honey bees that live in a hive: queen, drone and worker

The queen bee rules the roost (or should we say hive) and her main job is to produce more bees, laying up to 2,000 eggs a day in her prime! She only leaves the hive (possibly twice in her life) for mating flights and swarming. Male honey bees are known as drones – and you guessed it – their main role is to impregnate the Queen. She can collect up to an impressive 70 million sperm from drones during her one mating flight. The clue is in the name, so it is no surprise that it’s the worker bees who do the bulk of the work in the hive. These females fulfil tasks such as cleaning the hive, feeding the young bees, guarding the hive and foraging for nectar. These guys put us to shame!

8. Honey bees use a waggle dance to let other bees know where the good nectar is
After a successful forage for nectar, honey bees will return to the hive and do a waggle dance to communicate the direction and distance to the high quality forage. Bees are the only known animal that directly communicates where they have collected food from, and this helps them to sustain a healthy bee colony. Clever or what?!

9. Honey bees dehydrate nectar to make the perfect consistency of honey
When honey bees go foraging, they collect nectar and deliver it to another honey bee once they get back to the hive. The nectar is then passed from bee to bee and eventually deposited into one of the cells in the hive. Collectively the hive’s honey bees will flap their wings to dry off the nectar until its moisture content is reduced from approximately 90% to 18%, at most – but the water content of nectar can vary.

Once the honey bees are content they’ve removed enough water, they seal the cell with beeswax, and once all are sealed, beekeepers can harvest the yummy honey for us to enjoy.

10. Not all bees sting
People often fear bees because of the possibility of getting stung – but not all bee species sting. Of the three honey bees that live in a hive, drones don’t have a sting and even though the queen bee can, you are much less likely to experience it because she spends most of her time in the hive where she uses her sting to see off rivals instead.

The worker bees only sting when they feel severely threatened. It’s a last resort because once they use their barbed sting, they die. Their sting also gets more intense as the bee grows older, so a sting from a more mature worker bee will be stronger – containing approximately 40 to 50 chemicals in one sting alone.

The temperature of a beehive is typically around 37 degrees. This is regulated by bees flapping using their flight muscles, but it also depends on factors such as the water content inside the hive, and the movement of bees.

It’s never too late to wake up to nature and educate yourself on the wildlife around us – especially when spending more time outdoors during the summer. So, impress your friends with these fun facts and the next time you’re tucking into your sticky ribs or your honey mojito, think of the tiny food heroes and how you can go further to support them. Rowse knows all about this; the leading honey brand is on a mission to help protect and save the incredible honey bees through its Hives For Lives programme of vital initiatives. Together with its partners, Rowse is passionately striving to inspire the next generation of bee farmers, fund vital research into bees and offer beekeeping as a sustainable pathway out of poverty in Ethiopia. Learning and having a ‘hive’ of information about these powerful little pollinators is the first step towards protecting their future and our environment.