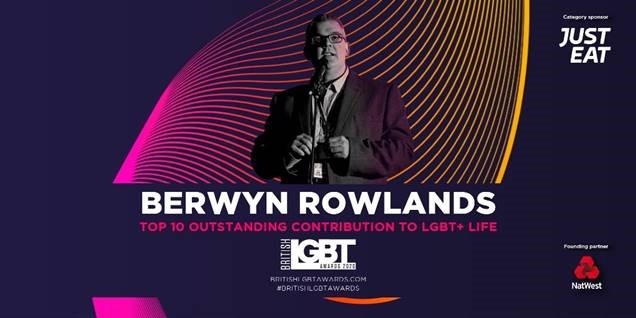 Iris Prize LGBT+ Film Festival Director Berwyn Rowlands has been selected in the Top 10 at the British LGBT Awards in the category “Outstanding Contribution to LGBT Life.”

The British LGBT Awards have been running since 2015 and aim to highlight and celebrate role models and organisations who work to better the lives of LGBT+ people in the UK. The Outstanding Contribution to LGBT Life award celebrates individuals whose work has made a significant impact to the LGBT+ community, and was won in 2019 by Human Rights Campaigner Peter Tatchell.

“I’m delighted that Berwyn has been recognised with this nomination. I’ve been able to observe Berwyn’s determination and commitment to make the Iris Prize a world leader from my vantage point as a member of the first jury in 2007 and very quickly after that the Chair.

I’ve seen Iris grow from the inaugural film festival in 2007 with a modest audience of 1,500 to an annual celebration of over 10,000 who gather in Cardiff to witness the presentation of the world’s largest LGBT+ short film prize.

Berwyn’s commitment to the LGBT+ cause started way back in the 1980s as an active member of CYLCH, the radical Welsh LGBT group. He was also the first president of Cardiff Lions RFC, and a member of Stonewall Cymru’s Media Watch group.

He has used the medium of film to shine a bright light not just on the discrimination and hypocrisy that is sadly is still part of so many of our lives. But the Iris Prize has also brought out some wonderful, heart-warming compassionate and amusing stories about the LGBT family worldwide. He’s made it easier for so many people to come out as part of the LGBT family. I’m proud to know him and support him in whatever way I can.

Berwyn is a visionary who delivers. He has the ability of getting the best out of those who work with him – this includes sponsors, the festival team, volunteers and the general public. He is truly one of the nice guys and I’m so pleased Berwyn has been recognised like this”

The Iris Prize team are proud and delighted that Berwyn has been recognised for his contributions to LGBT+ life, and this nomination confirms the impact and importance of the Iris Prize’s role in sharing LGBT+ film in Wales and beyond.

The award will be decided by a judging panel and will be announced at a ceremony in London on 29th May 2020.