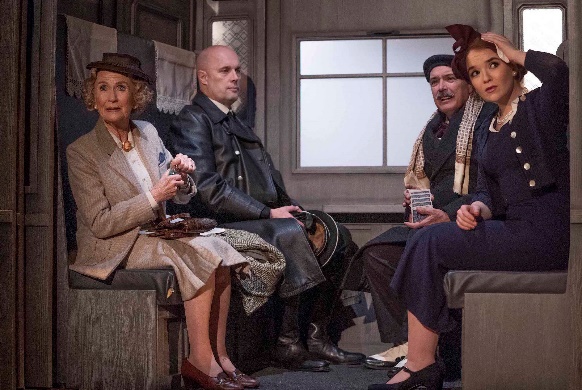 The latest production to grace the stage at New Theatre Cardiff is The Lady Vanishes, the adaptation of the classic Sir Alfred Hitchcock 1938 film of the same name takes us on a journey with Iris played brilliantly by Lorna Fitzgerald who is travelling home to England from German occupied Austria, when she encounters Miss Froy played by Juliet Mills who helps her after she is knocked on head on the station platform. Miss Froy then disappears and Iris seeks to find her with Max played by Matt Barber in a journey which soon asks the question who is Miss Froy?

The entire cast performed with such emotion and conviction that left you completely convinced throughout every minute of the performance, as the story played out and our questions are answered to an amazing stage set complete with train carriages and station backdrops. The scenes are impeccable complete with brilliant costumes and props nothing has been spared in this production.

With one liner’s aplenty, and cricket humour providing perfectly timed comedy into the otherwise serious atmosphere of the story, the combination of Dr Hartz played by Maxwell Caulfield and Official Joe Reisig produced the perfect mix of both intrigue and loathing.

If you like your stage thriller’s free from murder and unpredictable, then this show for you. The Lady Vanishes is two hours of getting lost in and playing out a story alongside the cast, A brilliant and entertaining stage show.

The Lady Vanishes is at New Theatre, Cardiff until 20 July.