Blacks Outdoors in Cardiff Teams Up With British Heart Foundation 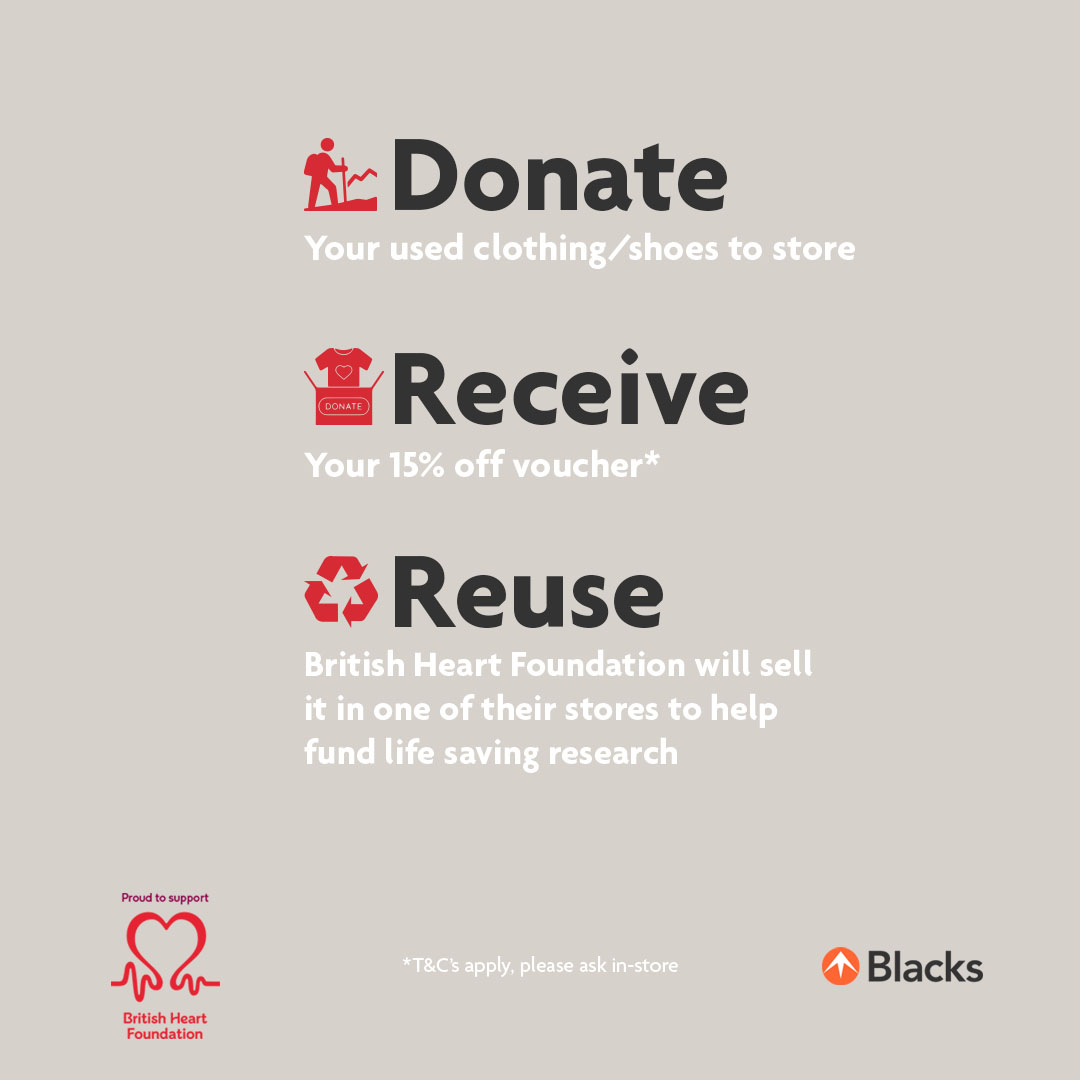 This month Blacks Outdoors in Cardiff has teamed up with the UK’s biggest heart research charity to offer discounts to store customers who donate unwanted clothing and footwear to The British Heart Foundation.

Customers who shop in store with Blacks are now eligible to receive a 15% discount off their in-store purchases, by donating their quality unwanted clothing and footwear. Donations will be collected from Blacks stores and sent to one of British Heart Foundation’s 750 nationwide shops and stores.

The Cardiff store, situated in the Cardiff Bay Retail Park, is among the 58 Blacks stores taking part. In Cardiff alone, 656 people die each year as a result of cardiovascular disease and 32,700 people are currently living with the condition in the area.

Customers who donate in-store will be able to receive discounts from some of the most popular outdoor brands including The North Face, Berghaus and Peter Storm. Blacks currently have more than 50 stores across the UK’s High Street and retail parks, and are confident that with the help of their generous customers the amnesty will make a huge difference to those who the charity support.

According to the charity, over seven million people in the UK are now living with heart and circulatory diseases, which are responsible for more than a quarter of all deaths. The British Heart Foundation fund vital research into heart disease, diabetes, vascular dementia and stroke.

As part of the team up, staff at Blacks HQ in Greater Manchester will be offered the chance to take part in CPR training sessions at work, something which has received extremely positive feedback from the workforce based there.

In further support, the team at head office have set themselves a challenge to donate 458 pairs of shoes in a shoe amnesty, a figure which represents the number of people in the local area of Bury to die from cardiovascular disease last year.

Speaking about the campaign, CEO of Blacks Lee Bagnall commented:

“We are delighted to be supporting the British Heart Foundation in helping such a large number of people in the UK who suffer from heart conditions. The research they do is vital for facilitating medical advances which will help them to one day achieve their vision of working towards a world free from the fear of heart and circulatory diseases.

“The Blacks team are confident that the generosity of our customers and their clothing donations will enable The British Heart Foundation to continue helping those in need. We are looking forward to providing an update to our customers on how the collaboration and their contributions have helped the charity to continue making such a positive difference.”

“We are thrilled to be working with Blacks Outdoors to encourage their customers to donate unwanted, good quality clothing and other items. Campaigns such as this are invaluable to the British Heart Foundation, providing a much-needed source of stock to our shops across the UK. The donations will then be sold to raise money to fund vital research into heart disease, diabetes, vascular dementia and stroke.”