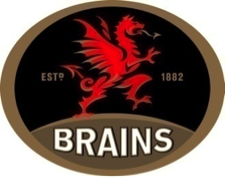 For the year ending 30th September 2014, Brains unveiled that operating profit grew by 113% to £5.4m following the implementation of a management restructure.  Turnover grew to £123m, up £0.8m on the prior year and EBITDA accelerated to £13.0m, a year-on-year increase of +10%.

In spite of a difficult trading landscape, growth was driven by successful investments in its outlets, focus on food offer development, accommodation and consumer marketing.

The significant improvement in profit performance was also driven by enhanced operational efficiencies and an increased focus on cost control.

Brains’ mainstream and seasonal beer brands continued to develop across the national on-trade and take home markets, while the Brains Craft Brewery, now well established, created more than 25 new beers throughout the year.

The Brains-owned Coffee#1 business also continued to grow strongly with overall sales up by +30%. The growth was generated by the opening of nine new stores, taking the total to 45 at the end of September 2014.

Chief Executive Scott Waddington said: “I have been delighted by the performance of the Brains business in what was a difficult year for many consumers economically.  Our focus on providing outstanding customer experiences, great service and developing well-targeted food and drinks offers continues to bear fruit.  Following a period of restructure, it is testament to the professionalism and hard work of the Brains team that such significant profit growth has already been realised ”

Looking ahead, Scott Waddington added, “While economic indicators for the UK economy are improving, consumer confidence has yet to return fully in Wales and future trading conditions are anticipated to remain challenging”

“We remain committed to the development of our portfolio of retail properties and beer brands and are particularly delighted that we are on track to open our 50th Coffee#1 site in April.  Additionally, we are highly optimistic that our operational, sales and marketing plans for our cask ales, craft beers and pubs can further bolster business performance in the months ahead.”