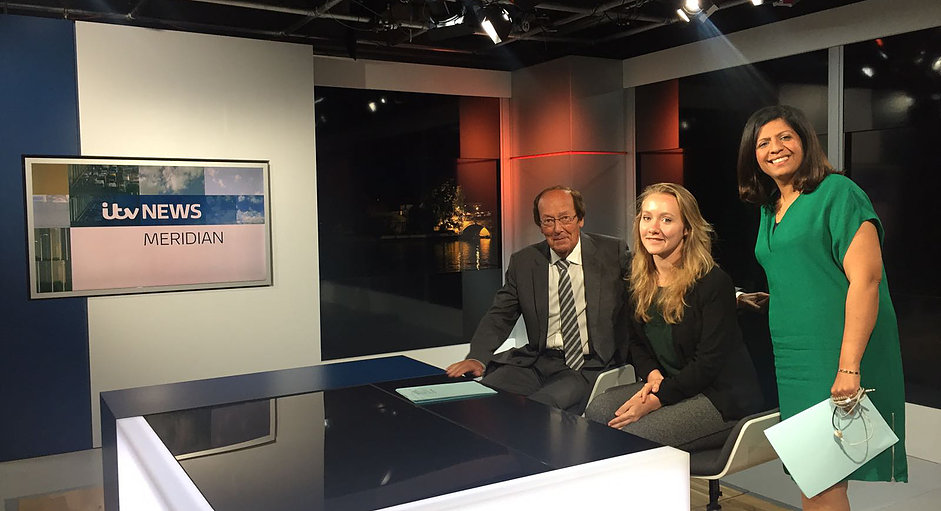 London, UK – February 11 2019: Today marks the launch of ‘Breaking into News’, a nationwide initiative run by Media Trust in partnership with ITV News, to discover the next up and coming ITV broadcast journalist and promote diversity in broadcast journalism. Now in its eighth year, ‘Breaking into News’ will once again be fronted by ITV’s award-winning news broadcaster Charlene White along with Rob Osborne for ITV Wales.

The competition is open to everyone of all ages and backgrounds across the UK and offers those with little or no media experience, the opportunity to break into broadcast journalism, reporting on a subject important to them. ITV Wales Correspondent, Rob Osborne who is leading the initiative for ITV Wales is encouraging local aspiring journalists to apply.

Ten applicants will be shortlisted, representing one for each of the ten ITV regions across England, Wales and Northern Ireland. Those who are shortlisted will be paired with an ITV journalist, based in their region, and over the course of six weeks will be mentored on all aspects of broadcast journalism, including writing, reporting, production and how a newsroom works.

The competition is now open and can be accessed via Media Trust’s Breaking into News microsite www.breakingintonews.co.uk. Applications are open for eight weeks until the closing date on Friday 5 April 2019.

ITV Ambassador Rob Osborne for ITV Wales says, “The television news industry needs more diverse voices from a wider range of diverse backgrounds. Everyone has a story to tell, a community they come from and know. TV news needs to better reflect that and I can think of no better way of tapping into that talent than through Breaking into News”

The overall winner will be selected by a panel of influential judges including Roohi Hasan (ITV News, Senior News Producer), Kate Watkins Tutor (Head of TV News Training, School of Media and Communication, Leeds University), Margaret Emsley (Head of News at ITV Calendar) and Jasmine Dotiwala (Head of Youth Engagement at Media Trust) and will be awarded with £400 worth of journalistic equipment and the chance to have their local news report aired on ITV. The overall winner will be revealed on Wednesday 24 July 2019 at a special award ceremony in London.

Charlene White says “I’m proud to be a part of the Breaking into News competition. A newsroom is only strong if it reflects the audience it broadcasts to. Everybody has the right to tell stories they’re passionate about – irrespective of who they are or where they come from. And BiN helps to facilitate that.”
Su-Mei Thompson, CEO at Media Trust added: “At Media Trust, we’re really concerned about the erosion in local reporting and the impact of this on the voice of local communities, the accountability of local institutions and ultimately, Britain’s ability to function as a proper democracy. That’s why Breaking into News is so important to us, with its emphasis on local news in ten different regions across the country and the nurturing of diverse local reporting talent. We’ve also been so heartened by the success of our previous participants, many of whom are now working in newsrooms across the UK and contributing their insights and perspectives to what will hopefully lead to a more participatory and representative approach to news reporting in this country.”

A quote from previous ‘Breaking into News’ finalist for ITV News Wales Ollie Youd: “I have loved every second of Breaking into News. It has shown me what I can really do. I honestly feel as though this programme is now the crown jewel of my CV. With the help of my mentor, I feel as though I am now truly breaking into news!”
The ten ITV regions include: ITV London, ITV Central, ITV Calendar, ITV Meridian, ITV Border & ITV Tyne Tees (combined regions), UTV, ITV Wales, ITV Granada, ITV Anglia and ITV West Country.
The full list of ten ITV ambassadors include: Donovan Blake (Anglia), Pam Royal (Tyne Tees Border), Otis Holmes (Calendar),Sameena Ali-Khan (Central), Anna Youssef (Granada), Ria Chatterjee (London), Sangeeta Bhabra (Meridian), Rob Osborne (Wales), Alex Beresford (West Country) and Natasha Millar (UTV).

Further case studies and quotes from finalists and ambassadors available on request.