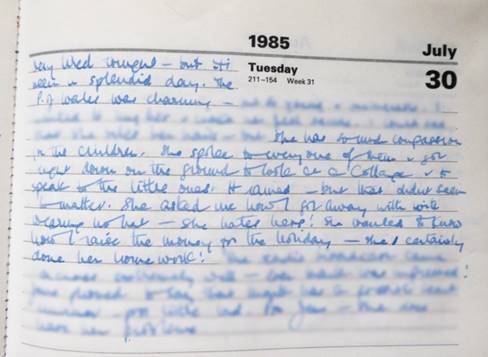 Today, on what would have been Diana, Princess of Wales’ 60th birthday, the British Red Cross has released two documents, including a never-before-seen diary entry following a meeting with Princess Diana.

The diary entry was written by Eileen Nicol, who was Chairman at Activenture, a holiday camp for children with disabilities in Sussex, run by the British Red Cross. Dated 30th July 1985, the entry documents the Princess’ day visiting the centre and her unsurprising love for the children.

“[The Princess] was charming. She has so much compassion for the children” Eileen writes of the visit. “She spoke to every one of them and got right down on the ground to look at a collage and to speak to the little ones.”

“It rained, but that didn’t seem to matter.” She continues, “She asked me how I got away with not wearing a hat. She hates hers. She wanted to know how to raise the money for the holiday. She had certainly done her homework.”

Now 87 and still a supporter of the British Red Cross after 63 years, Eileen looks back fondly at that day, 36 years ago.

“I remember everyone being very excited. She spoke to every one of us and she spoke so well. The children loved her, and she loved the children. She told me she wishes she had my job. It truly was a marvellous day.”

When asked why she believes her impact and legacy on charity is important to remember, Eileen said:

“Her impact was worldwide. She’s known in every country, for her compassion, her smile and her love of children. We were so fortunate to have had her involved with our work before she sadly passed away”. 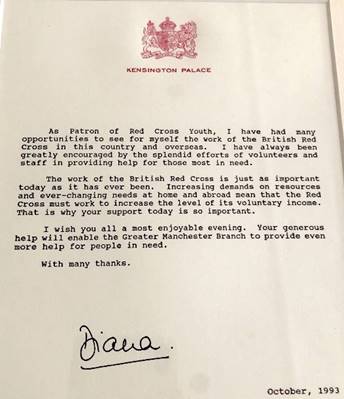 The second document, a letter from the Princess of Wales written in 1993 shows just how deeply humanitarianism and helping others meant to her.

“She told me how highly she thought of the Red Cross and the wonderful work we do. And then we just chatted really.” Edith recalls.

“She was so approachable because she was so relaxed. When someone is relaxed, you relax with them, and it just made the whole experience better.”

But Edith remembers an unexpected part of the conversation when chatting about plans for the evening:

“I said ‘Ma’am, what do you do now? Do you have anywhere to be? And to my surprise she said ‘I’m going home tonight. I’m having beans on toast and watching EastEnders!’ I thought that was so funny”.

The letter was sent to Edith a couple of years later, after she wrote to the palace asking for a photo to put in a Red Cross brochure promoting the annual charity ball. She received such a personal and heart-warming letter back. It read:

“As Patron of Red Cross Youth, I have had many opportunities to see for myself the work of the British Red Cross in this country and overseas. I have always been greatly encouraged by the splendid efforts of volunteers and staff in providing help for those most in need.

The work of the British Red Cross is just as important today as it has ever been. Increasing demands on resources and ever-changing needs at home and abroad mean that the Red Cross must work to increase the level of its voluntary income. That is why your support today is so important.”

I wish you all a most enjoyable evening. Your generous help will enable the Greater Manchester branch to provide even more help for people in need. With many thanks, Diana, October 1993”.

“Having met her two years earlier, this letter did not surprise me,” Edith said.

When asked about her thoughts on the continuation of Diana’s legacy on the British Red Cross and charity in general, Edith said:

“I think her legacy is one we should hold on to because of her humanity. She was ahead of her time. Her work with removing the landmines and the stigma around HIV/AIDs would resonate today with young people because young people are, I believe, much more aware of these kinds of atrocities and the subsequent damage.”

Princess Diana became patron of the Red Cross Youth in 1983. She also took particular interest in the Red Cross’ work overseas. Some of Diana’s most notable humanitarian work was around anti-personnel mines. She famously travelled to Angola in January 1997, a trip organised and supported by the British Red Cross. Diana’s visit to Angola brought unprecedented attention to the landmine issue and sparked international discussion.

“Throughout her life, Princess Diana was a dedicated humanitarian who championed causes in the UK and overseas.  From making connections with young people in her role as Patron of the Red Cross Youth, to campaigning against landmines, she was one of our most dedicated supporters, using her public profile to make positive change. The impact of her work is not only remembered on what would have been her 60th birthday, but continues to have a lasting impact today”.

To learn more about Princess Diana’s involvement in the Red Cross and help us continue her legacy by supporting our vital work, visit: redcross.org.uk/princess-diana