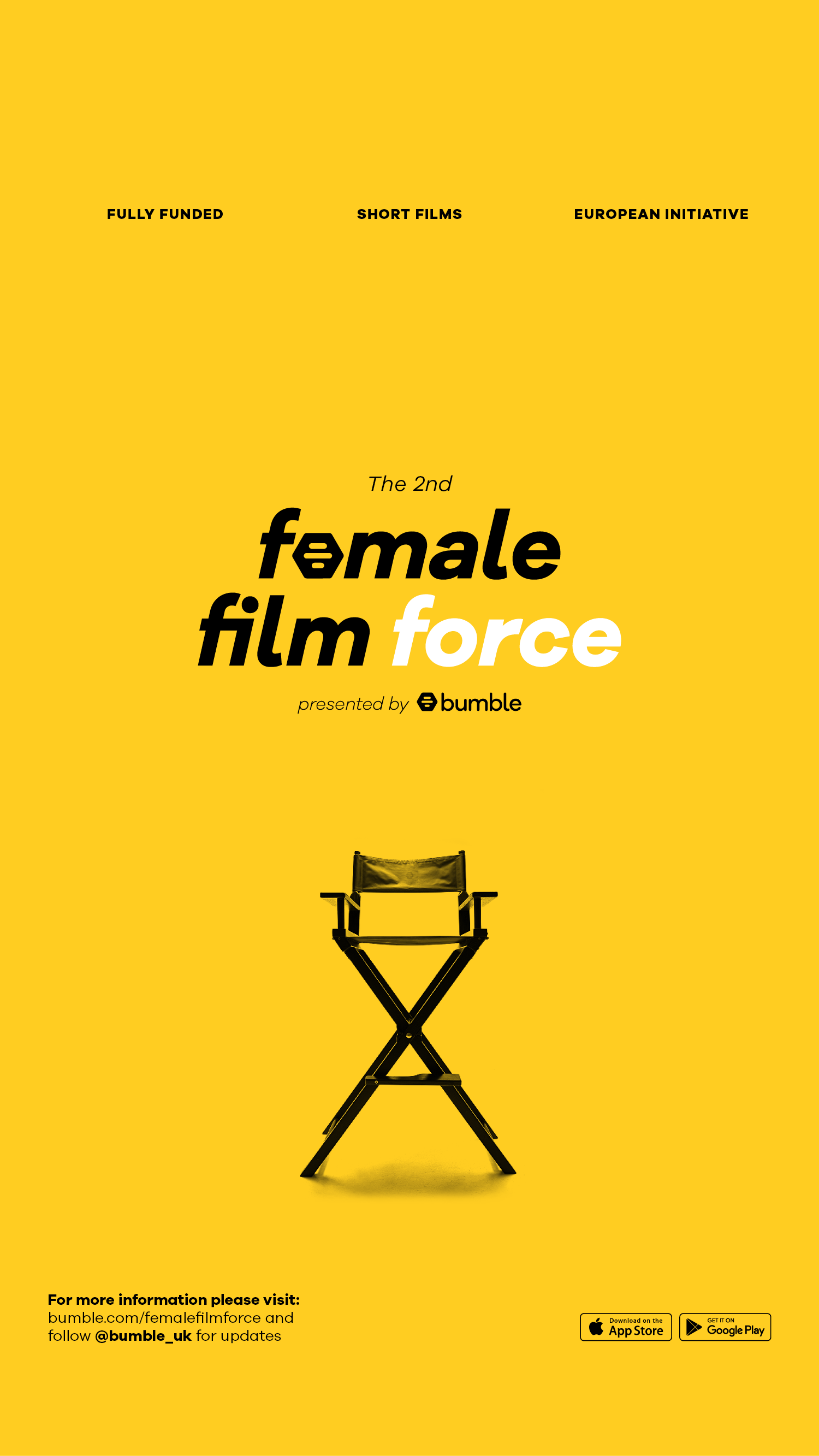 Following the production of five female led films supported by The Female Film Force in the UK last year, and overwhelming demand from the industry, Bumble is thrilled to be bringing the initiative back. The social networking app, focused on empowering women to go after what they want, are announcing the expansion of the initiative to two of their largest European markets, Germany and France – in addition to the UK and Ireland.

Bumble is now giving the opportunity for five teams of women filmmakers (writer, directors or producers) to be granted £20,000 (€22,000) each to make a short film, rooted in Bumble’s values of kindness, respect and equality, in an attempt to address the imbalance within the Global film industry.

With over 50 million users, Bumble is encouraging women across the UK, Ireland, France and Germany to find their tribes of filmmakers through the Bumble Bizz vertical – a unique professional networking vertical that enables users to filter by industry to connect with like minded professionals. Whether you’re a producer looking for a director, or a director looking for a writer – Bumble are encouraging users to utilise their profiles to highlight the skill-set they need to build their teams from scratch. The initiative will be accessible through Bumble’s professional industry networking mode, Bumble Bizz. Download Bumble, and head into Bumble Bizz to match with the application card.

On Sunday night at the Oscars nearly ¾ of the winners were male (73%)! This year, the nominees for Best Director at the Academy Awards, the BAFTAs, and the Golden Globes were all male. Not one of the films nominated in the Best Film category, at all three of these world-renowned awards ceremonies, was directed by a woman.

At this year’s BAFTAs only a third of the winners were female (34%). All of these awards recognise brilliance within the film industry and their influence send cultural repercussions across the world.

In 2017-18, U.S. festivals screened almost three times as many narrative features directed by men as by women and only five women have ever been nominated in the Best Director category at the Oscars (in its 91 year history). Only one has ever won it.

Only ¼ of the movies approved by the Ministry of Culture are directed by women and female directors’ salary are around 42% less than the men’s.

In Germany, around only ¼ of film directors are female and only 15% of cinema films in Germany are directed by women. Female directors only receive 10% of the funding available in Germany

What we’re going to do about it:

– Today we are proud to announce Bumble Presents… The Female Film Force — the opportunity for all women creative teams of writers, directors and producers to have their short films fully funded
– We will be choosing five film teams across the three markets and funding them £20,000 (€22,000)
– The finalists will be championed to create empowering women led stories rooted in Bumble’s values – of kindness, respect and equality
– We are encouraging anyone applying who doesn’t feel they have those networks in place to find those connections on Bumble Bizz. If you are a director with an idea, but without a writer, find one on Bumble Bizz

Nicole Ackerman, Managing Partner of Mouna Studios, Chair of Women in Film & Television Germany, Board Member of WIFT International — “I love this initiative for giving opportunity to women out there, on a broad and diverse range. Because, very often in life, opportunity is what matters most. Opportunity to apply leads to the opportunity to get accepted leads to the opportunity to showcase your very best work. To create one’s very own calling card. Which is a card of opportunity itself to move forward into a successful future. That’s how I got into this business. That’s how even today it’s the most important way to move my projects forward. By getting an opportunity, by taking it, and by making something out of it. Women need opportunities. Especially in the world of film. An initiative that gives women in film opportunities gets my support.”

Christiana Ebohon-Green, Director — “It’s time that the gender imbalance in filmmaking was resolved. Too many stories about women, by women have gone untold. This is unjust and outdated. Schemes that try to address this issue are fantastic and should be celebrated.”

Jane Featherstone, Founder Sister Pictures, Executive Producer Broadchurch, Spooks and Utopia — ‘The statistics are stark and the facts are simple – female filmmakers are underrepresented across all sectors of the international industry, and there needs to be an institutional shift in order to redress the balance which is why I am thrilled to be asked to be part of this brilliant initiative. With practical development and progression at its heart, I’m looking forward to working with some seriously talented young women to help them generate a compelling new narrative both for the industry and audiences alike.”

Phoebe Fox, Actress — “Even with considerable effort by some people within the industry, the awards season that has just been made evident the realities of being a female filmmaker. It’s depressing that we are still having to create these kind of initiatives to try and redress the gender balance in film making in 2019, but women are nothing if not resourceful!
I was hugely inspired not only by the films created for Bumble’s Female Film Force last year, but by the project itself. It can take a lot of self confidence to go about writing and directing your own work, and so often the the difference between making something, and not, is a guiding hand.”

Emma Freud, Broadcaster, Script Editor and Executive Producer of Red Nose Day — “It’s worrying that not one woman was nominated for Best Director at the Oscars, the Golden Globes nor the BAFTAs in 2019. Women obviously have the talent – the question is why aren’t they being given the opportunities or the platforms to show the brilliant work they can create.

We would all benefit from seeing more stories by women, about women and told by women. That’s why I’m supporting The Female Film Force 2019 and Bumble’s efforts to get more women into film. The films that were made last year as part of this initiative are remarkable and I’m thrilled that some of these women are now working within the industry. That’s 15 women who have had their talents showcased and stories made. Who knows what next year will bring.”

Maike Mia Höhne, filmmaker, curator, Artistic Director International Short Film Festival Hamburg and former head of of Berlinale Shorts — “We share this planet – so we should also share our vision of this world on screen. Let’s keep on working hard to empower women and all genders, to bring their films to the screen. Again and again, all together we have to push and believe in the importance of our work. I am happy to support the Female Film Force and women artists’ voices.”

Kate Kinninmont, MBE, MD of The f Word Media Company and former CEO of Women in Film & TV (UK) — “It’s great news that Bumble will be running the Female Film Force competition again this year! It’s an exciting initiative that can really boost women filmmakers. Frankly, they need all the help they can get because the entire industry remains so steadfastly male. Lip service is paid to greater equality but it’s not happening. We need action and it’s fantastic that Bumble recognise that and are doing their bit to change things.”

Stacy Martin, Actress — “I’m proud to be a part of Female Film Force this year. It is a known fact we need more women making films. When I’m looking for a project to work on, most of them are by male directors. It’s very frustrating to read so little stories about women and made by women. The film industry is changing, it is becoming more diverse and more gender balanced. But there is still a lot of work to be done and this needs to happen at the very beginning of film making. We need more financing and more opportunities supporting women artists for them to become an integral of the film industry. The Female Film Force is a great initiative to tackle the present problems we face for a more hopeful future”

Archie Panjabi, Actress and Executive Producer — “It is high time that we saw a fairer balance of gender and diversity within the film industry, both in front and behind the camera. I’ve worked with some incredible women during my career but very few female directors. We are definitely seeing a focused effort to better represent the diversity of the world on our screens, and slowly, we are starting to see more women in leadership roles in film too. I commend these efforts but we need to do more. That’s why initiatives like the Female Film Force are so valuable – because they are driving actual change.”

Marianne Slot, French Film Producer — “We have many great women working within the buoyant film industry in France and yet when it comes to distribution of power, we still see a grave gender imbalance. We absolutely need more action to address this, as it does not reflect the society within which we live. That’s why I’m thrilled to support The Female Film Force. An initiative that empowers and mentors women in film gets my support!”

Anna Smith, President of The Critics’ Circle and host of the all-female podcast Girls On Film — “Girls On Film is dedicated to amplifying women’s voices in the film industry, so I’m thrilled to support Female Film Force. Last year’s short films were terrific: inspiring, moving and full of positive spirit. They showed how vital the female perspective is. And yet, not one female director was nominated for Best Director at the EE BAFTAs or the Academy Awards in 2019. With three female directors receive nominations in the Best Documentary (Feature) category, things are looking up – and we saw a lot of women from many different backgrounds on stage at this year’s Oscars. I hope Bumble’s Female Film Force will help speed up progress and give talented women an opportunity to be seen.”

Louise Troen, VP International Marketing & Communications, Bumble — “We pride ourselves on being a social network but above this – we have a duty and a responsibility to drive our mission of gender equality forward. The root of this is education. Storytelling is one of the more pertinent forms of educating on new ways of thinking, opening our eyes of understanding, and rethinking our own beliefs. The films we created last season did this. Through touching narratives around community, ambition, sexuality and diversity – we opened everyone’s eyes to the way women feel, and are understood. We learned, we laughed and we were lifted. There was no question of whether we should do it again.”

Applications for Round One will close on the 20th March. A shortlist will then be announced and our filmmakers will be asked to submit further materials to support their ideas.

Anyone who identifies as a woman is encouraged to apply.

Ten teams will be asked to pitch to our industry panel in London in June.

The five chosen teams will be announced in June with films delivered in January 2020 and showcased at an exclusive industry event.

Over the production period, our five filmmakers will also receive guidance from leading industry experts as part of a bespoke mentorship programme created in partnership with WDW Entertainment and Female Film Force Producer Elisabeth Hopper.