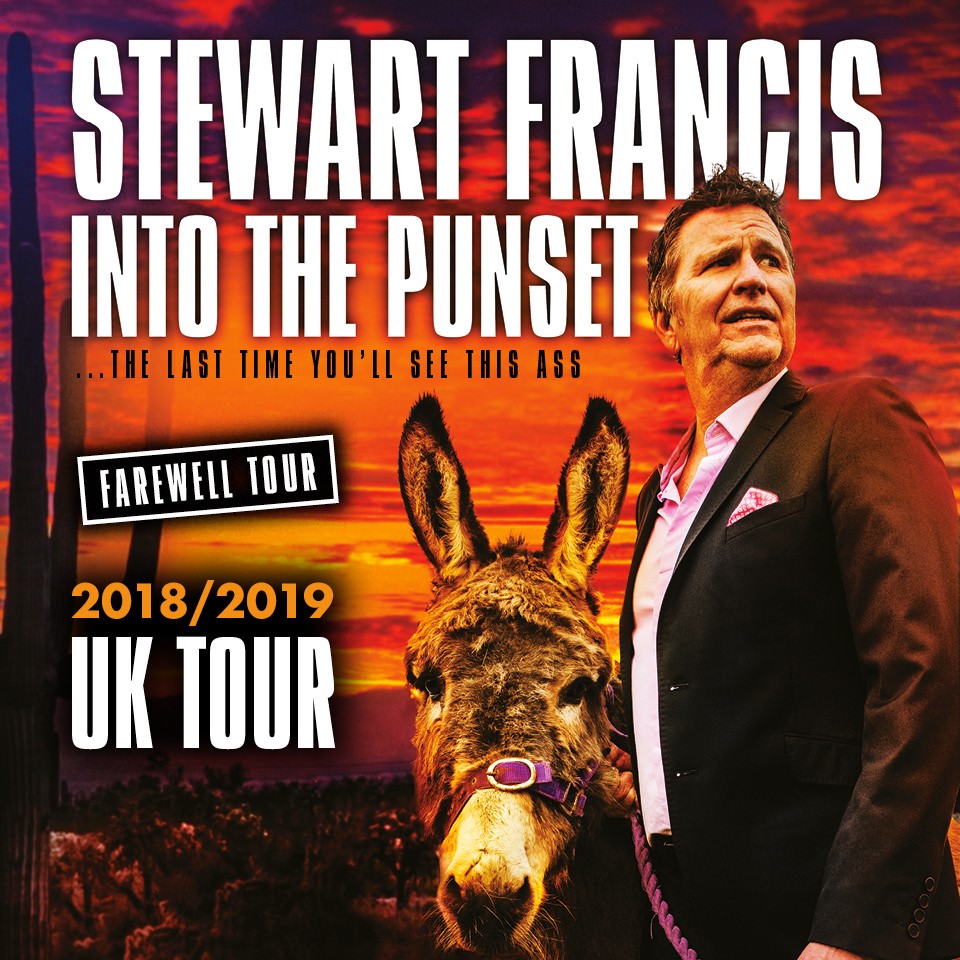 The King of the One-Liner has sold out the venue several times in the past, so you’ll need to be quick if you want to see Stewart performing his superb stand-up for the last time ever in Cardiff.

Renowned for his trademark deadpan delivery and perfect puns, he has become a familiar face on popular programmes like Live at the Apollo and Mock the Week.

Why have you decided that the time is right for you to hang up the microphone?

For a whole bunch of reasons – all of them good! The way I’m looking at it is that a perfect guest knows when to leave, and so I’m going to step away from comedy having given it a 30-year run. I could not be happier to go out on with a good show. It’s my best work.

Is there any chance of a Sinatra-esque comeback a few years down the line?

No, there will be no Sinatra – mainly because I can’t sing! People are very suspicious of it as acts often come back. The Who came back about five or six times, The Eagles came back and that’s sad to me. I try to be a man of my word, so I will honor this one. Even if I want to come back, I won’t because I said I wouldn’t!

Do you feel any extra pressure having to go out in a blaze of glory for your last ever tour?

No, it’s all happened organically. The fact that it’s my best tour worked out nicely as I always want to put on the best show possible, but this one truly turned out to be the best!

What have stuck out as the highlights over the years?

The first night I ever did stand-up was a real sense of accomplishment – which I’ve felt numerous times over the course of my career – but that one in particular because I’d thought of being a comedian and I did it for goodness sake! And I did a good job, so that’s probably my first highlight. It was such a high after that performance, I was punching the air with jubilation.

Doing late night American chat shows was also a highlight as it was something I always wanted to do. That was good!

Will you miss stand-up?

I don’t know. I’m an emotional fellow at the best of times, but I don’t know if I’ll be so in professional mode that I will kind of get the job done. It’s hard to say.

The first leg of the tour I wasn’t emotional. I think I’ll be emotional backstage when I step off the stage and hear that applause – hopefully!  It’s a real nice feeling to go into the evening with that sense of accomplishment, but I don’t know how I’ll feel leading up to the last show which is December 7 at the Hammersmith Apollo. I don’t know how I’m going to react, I could break down and just curl up in a corner and cry, but I think it will be joyful. Again it’s such good work. I’ve had a wonderful career, and I’ll be going out on a high and on to new chapters. The Hammersmith Apollo is “go large or go home”, and I’m doing both!

Is it right that you write your material solely for British audiences?

I don’t. I just write the best jokes I can, but British audiences tend to gravitate more to my humour. I will write British references as I live here now, so I’ll make any references geographically British whereas I wouldn’t do that back in Canada.

But I write an act that’s meant to travel well for those reasons. You want to be able to take it around the world. I do reference the UK and Ireland quite a bit on this tour though.

Are you more influenced by British comedy than anywhere else?

I think so. There seemed to be more one-liner guys back in the day – Les Dawson and Tommy Cooper and the like. I’m drawn to that style of comedy as you get more bang for your buck. If you’re laughing or you didn’t get the last joke, there’s another one coming in just behind, so I do like that. Although, one of my all-time heroes is an American comedian named Rodney Dangerfield. He was a joke machine and I loved watching him.

What is next for Stewart Francis? Are you still pursuing acting roles and writing screenplays?

Yes, that’s still very much in the forefront. The last show is December 7, and effectively by December 8 I’ll be an unemployed actor seeking to get parts! I’ve got another screenplay that I’m working on so you just write them, send them out and hope for the best and see what happens. It’s a funny old business as you can get the call the next day saying “we’d like to option that”. It’s wonderful!

What sort of roles are you looking for?

Whatever comes my way, but I want to distance myself from comedy so I’m purposely doing that. I’m stopping stand-up because I think by and large casting directors can be lazy in thinking “Oh he’s a comedian, we’re not going to put him forward for that”. If I’m not a comedian anymore they can’t do that, they have to hire me!

Are you still enjoying being a cartoonist too?

I haven’t done it in a while. I dabbled, I don’t know if I’ll continue to dabble. We’ll see what the future holds, but now that I can draw a cartoon and post it on social media I might do that as that’s pretty wonderful and immediate. We’ll see what happens!

The last time you were with us at St David’s Hall was for The All-Star Stand-Up Tour in May 2017 with Justin Moorhouse, Jarred Christmas and Mike Gunn. Was that an enjoyable experience?

I finally got paid only about two weeks ago for that tour! But hanging out with those guys was great because I’d become so used to being a solo performer and not having that camaraderie. But yeah, I finally just got paid!

What makes Into the Punset unmissable for comedy fans in Cardiff?

I’d be grateful if you can make it, but I’m grateful for all the support Cardiff has given me over the years from when I used to do the comedy club to coming to St David’s Hall – that’s just massive and that’s a real sense of accomplishment. I’m very grateful for that, so thank you Cardiff!

“One of the funniest comedians in the world”