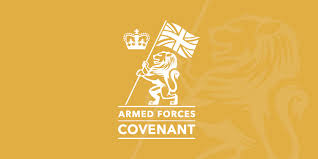 Cardiff and Vale University Health Board has been awarded Gold for its support to the armed forces, only 50 awarded in the UK this year.

The Health Board was awarded a Gold Award announced by the Ministry of Defence for businesses and organisations who have shown outstanding support for the military community and the Armed Forces Covenant.

The ‘Gold Awards’ recognise that Cardiff and Vale UHB have shown fantastic initiative in areas such as employing veterans and providing support for the armed forces helping them into a new career.

Now in its fifth year, the awards have really become the highest badge of honour available to those that employ and support those who serve, veterans, and their families.

Dr Fiona Jenkins is Executive Director for Therapies and Health Science and Executive lead for armed forces and veterans in Cardiff and Vale University Health Board said:

“It’s an honour to be among the NHS organisations to receive this prestigious award, supporting the armed forces, the military community and their families is something we take very seriously and are very proud of here at Cardiff and Vale UHB. This award recognises the steps we have taken to deliver our armed forces covenant. This includes; GPs recording patients as being veterans to ensure they receive appropriate priority status for health care, hospital services offering priority care, our Veterans’ NHS Wales service and promoting becoming a reservist to our UHB staff.”

Minister for Defence People and Veterans Tobias Ellwood said: “The breadth and diversity of this year’s winner’s shows how business support for the armed forces continues to flourish. Their commitment is a testament to the fantastic contribution our serving personnel, veterans and their families can make to any organisation.”

For the full list of the 2018 Employer Recognition Scheme Gold award winners go to: www.gov.uk/government/news/50-employers-awarded-gold-for-supporting-the-armed-forces