Director of Calonau Cymru/Welsh Hearts Sharon Owen asked local artist Christopher Langley if he would provide a work for auction the Snowflake Charity Ball on December 4th 2015.  Langley, 53, now living in Cardiff has shown work in New York in addition to selling to collectors worldwide.

Langley donated ‘The Red Umbrella’, seen here with none other than himself: Father Christmas!  The event was held at the Marriott Hotel, Cardiff. Langley, who accepts commissions including pet portraits, says: ‘It is a privilege to donate my work which fetched £150 for the Charity.” 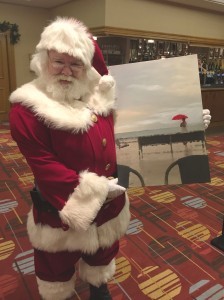 Welsh Hearts/Calonnau Cymru was founded in 2013 by Sharon Owen and has been focusing on placing Defibrillators in communities and schools through-out Wales and holding free CPR training sessions to the public!

Welsh Hearts have trained over 7736 people in CPR and have placed 215 defibrillators across communities in Wales. The aim of this is to drastically improve the chances of those that have cardiac arrests outside of hospital where the first few minutes are absolutely crucial in saving their lives. In Wales there are approximately 8000 sudden cardiac arrests outside hospital each year. It’s shocking that the survival rate is only 3%. Where an AED (defibrillator) is used, the survival rate is 50%.

The charity is working with Dr Bob Baron, a GP from Tonypandy, on the RCT100 Appeal to secure 100 plus Defibrillators in the Rhondda Cynon Taf area. To coincide with their second Birthday the charity are launching “Every Second Counts Appeal” an appeal to get 500 Defibrillators into Wales’ capital Cardiff.

Welsh Hearts have also teamed up with ‘Jack’s appeal’. In 2012 Jack Thomas, a fit and healthy A* student who had represented Wales all across Europe in Taekwondo died suddenly from an undiagnosed heart condition. Jack’s death came as a complete shock to his parents June and Grant as Jack had never been ill. Working together with Jack’s Appeal Welsh Heartsgo into Secondary and Primary schools teaching CPR and use of a Defibrillator and basic first aid training for younger pupils.

Langley’s work can be seen at christopherlangley.net in addition to The Celtic Manor, David Lloyd Cardiff, Il Pastaficio, Jaspers Tearooms, Llandaff, and the Beufort Inn, Raglan.