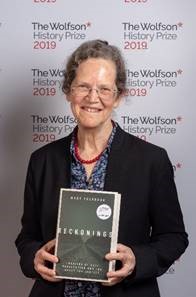 London, 11th June 2019. Historian Mary Fulbrook has been awarded the 2019 Wolfson History Prize for her ground-breaking book Reckonings: Legacies of Nazi Persecution and the Quest for Justice (Oxford University Press).

Historian and Award Judge Diarmaid MacCulloch announced the winner at the ceremony at Claridge’s, London, commenting: “Fulbrook journeys into some very dark places with the human sympathy that marks the best historical writing.”

Fulbrook, a leading authority on German history, was selected from a shortlist of six authors to win the £40,000 Prize. Awarded annually to a work of historical writing that combines excellence in historical research with readability for a general audience, the Wolfson History Prize is the UK’s most prestigious history writing and most valuable non-fiction prize.

Reckonings is an affecting study of the legacy of the Holocaust, exploring the extent to which Nazi persecutors were brought to account, and how myths of justice being done developed in the years following the Second World War. Illuminating the stories of those who have until now remained outside the media spotlight, Reckonings draws on personal accounts of both victims and perpetrators, exploring issues of suffering and memory, and asking difficult questions of the reader. Reckonings seeks to expose the disjuncture between official myths about dealing with the past on one hand, and the extent to which an overwhelming majority of Nazi perpetrators ultimately evaded justice, on the other.

Mary Fulbrook said upon winning: “This was a horrible book to write … I was filled with moral outrage throughout writing it and it felt almost impossible to do justice to the people within it. Thank you to the Wolfson Foundation for understanding that it’s really important that we not merely understand the past but write to make it accessible.”

The Wolfson History Prize judges commented: “Quoting many moving accounts from victims of the extreme cruelty perpetrated by the Nazis, Fulbrook moves through the generations to trace the legacy of Nazi persecution in post-war Germany. A masterly work which explores the shifting boundaries and structures of memory.”

Paul Ramsbottom, chief executive at the Wolfson Foundation, said: “The Prize celebrates wonderful books which break new ground in understanding the past. Mary Fulbrook’s book highlights the importance of history – and debates about history – to a healthy and flourishing society. It also demonstrates the engaging, accessible writing style which is a hallmark of the Wolfson History Prize: taking high quality, research driven history outside of academia to a diverse audience.”

The other titles shortlisted for the Wolfson History Prize 2019 are Building Anglo-Saxon England by John Blair, Birds in the Ancient World: Winged Words by Jeremy Mynott, Trading in War: London’s Maritime World in the Age of Cook and Nelson by Margarette Lincoln, Oscar: A Life by Matthew Sturgis, and Empress: Queen Victoria and India  by Miles Taylor. Each of the shortlisted authors will receive £4,000.

The Wolfson History Prize is run and awarded by the Wolfson Foundation, an independent charity that awards grants in the fields of science, health, education, arts & humanities.