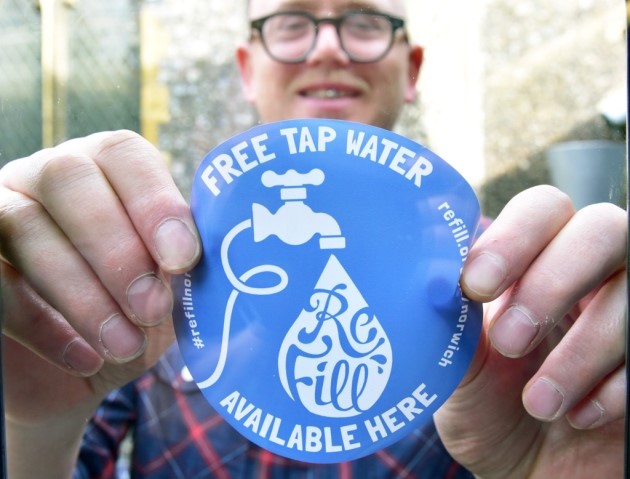 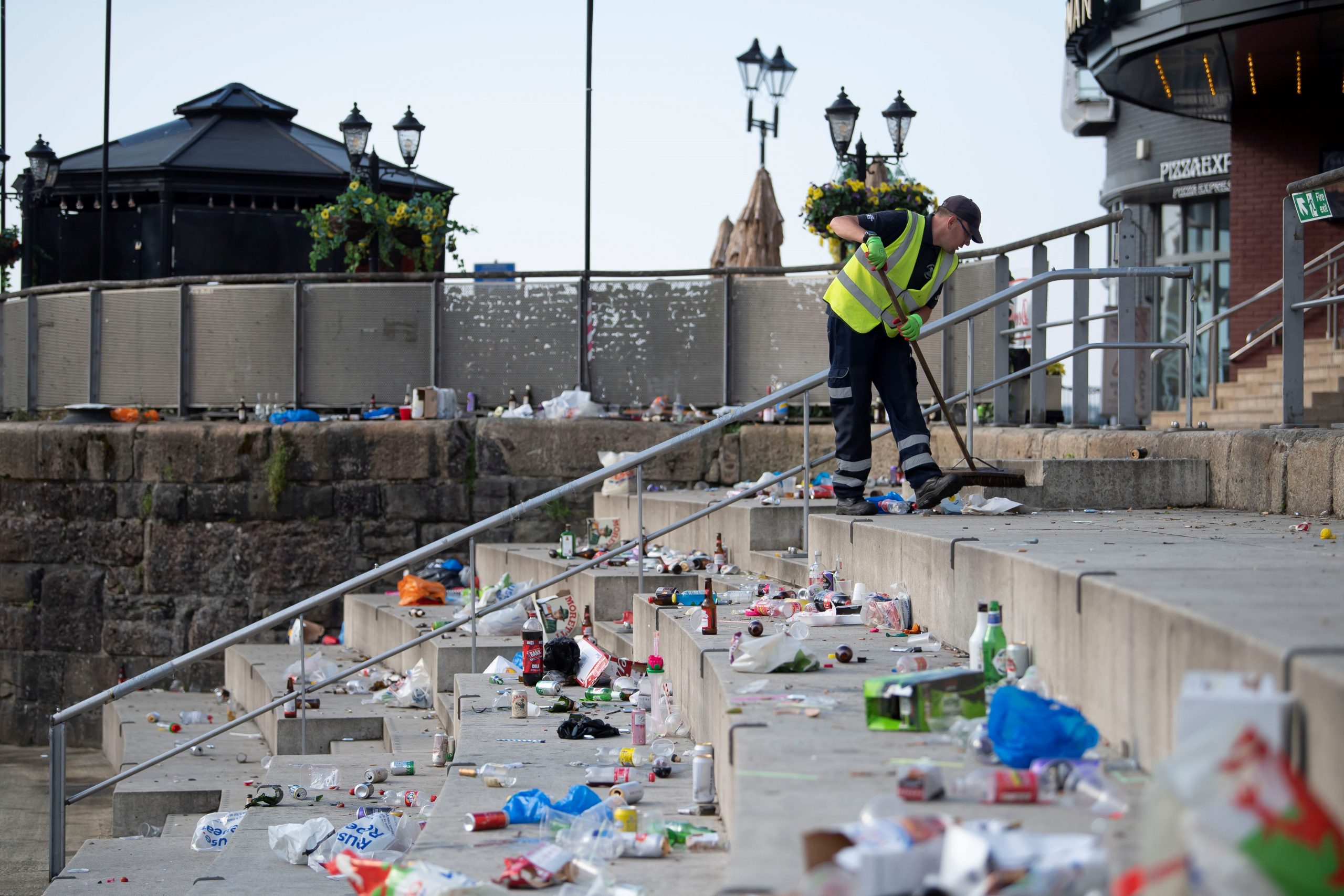 Rubbish left at Roald Dahl Plass, Cardiff Bay, during the coronavirus lockdown is cleared up on June 26.

Now, the people of Cardiff are being encouraged to ‘choose to reuse’ this Autumn, by opting for a reusable water bottle and filling up on the go with a local business, rather than buying a single-use plastic bottle.

Coordinated by City to Sea and funded by Welsh Government, Refill works by connecting people looking for drinking water with thousands of Refill Stations across the UK via a free location-based app. Participating cafes, bars, restaurants, banks, galleries, museums and other businesses simply sign up to the app and put a sticker in their window – alerting passers-by that they’re welcome to come on in and fill up their bottle. The app has been downloaded over 300,000 times and there are now almost 30,000 Refill Stations across the UK.

In Cardiff, consumers can refill at over 280 different venues, including Kin+Ilk in Pontcanna and the city centre, Lufkin Coffee in Grangetown and Canton, Ripple Living in Roath, and at selected supermarkets and at Costa Coffee branches across the city; the message is loud and clear that Cardiff businesses are backing refills.

Refill local champion Julia Terlet said, “Refill Cardiff is proud to be part of the Refill Revolution. We’re delighted to see how engaged the local community is, from students to families. Over the past two years, we’ve received support from many businesses, shops and organisations within the city to encourage plastic-free behaviours. It is important now that we continue to spread the word!” 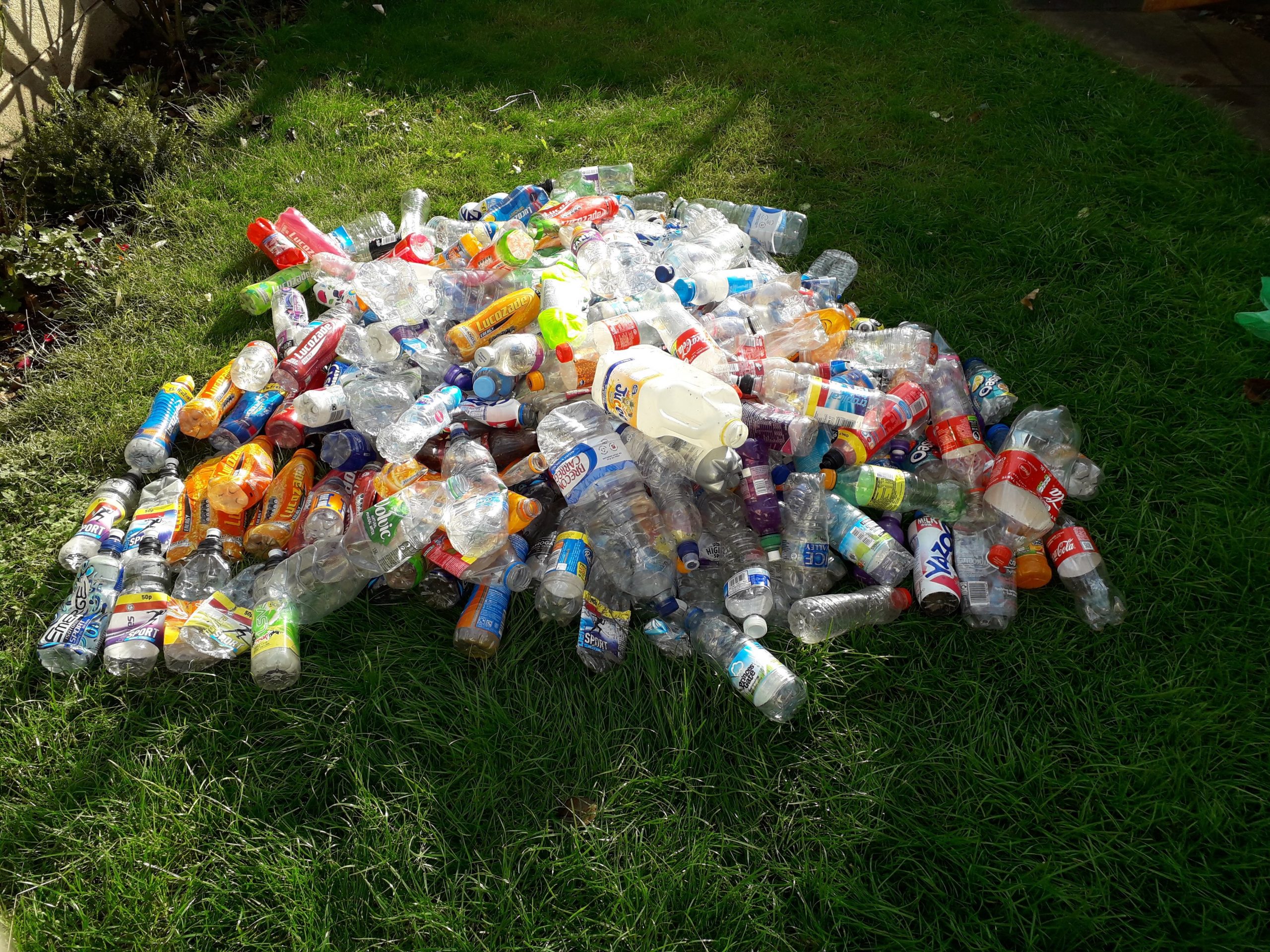 Canton resident Donna Thomas organises a regular community litter pick around Victoria Park. She said that plastic bottles make up a large percentage of the litter collected by the volunteers every week, and that last year, she picked up more than 250 discarded bottles over a four-week period. She said, “We’d estimate that empty soft drinks and water bottles make up about 70 – 80% of what we collect on every litter pick. If more people carried a reusable instead of relying on single-use plastic on the go, this would have a big impact on the likelihood of it ending up as litter on the street.”

Keep Wales Tidy Chief Executive Lesley Jones said: “Our most recent street cleanliness survey showed that drinks receptacles were found on 43% of streets. Like all litter, this not only affects the look and feel of our communities, but has a significant and far-reaching impact on wildlife, our health and well-being and the local economy. As a country we must do better. Every small change that you make to your everyday life can make a positive difference. Take a step in the right direction by carrying a reusable bottle and filling up on the go.”

Sophie Rae from Ripple Living Zero Waste shop in Cardiff – which is also listed on the Refill app – said: “After seeing the way that littering increased after lockdown, we want to encourage everyone to become part of the #RefillRevolution. These small individual actions can really add up, to help to keep our streets, parks and beaches free of plastic.”

In the UK, we make our way through a mind-blowing 7.7 BILLION plastic water bottles every year whilst an estimated 700,000 plastic bottles are littered every single day. We have some of the best quality drinking water in the world – directly from our taps – and scientists, including over 125 experts from around the world, have said reusables are perfectly safe to use.

City to Sea is encouraging people to try and reduce the amount of plastic waste they create this Autumn by: