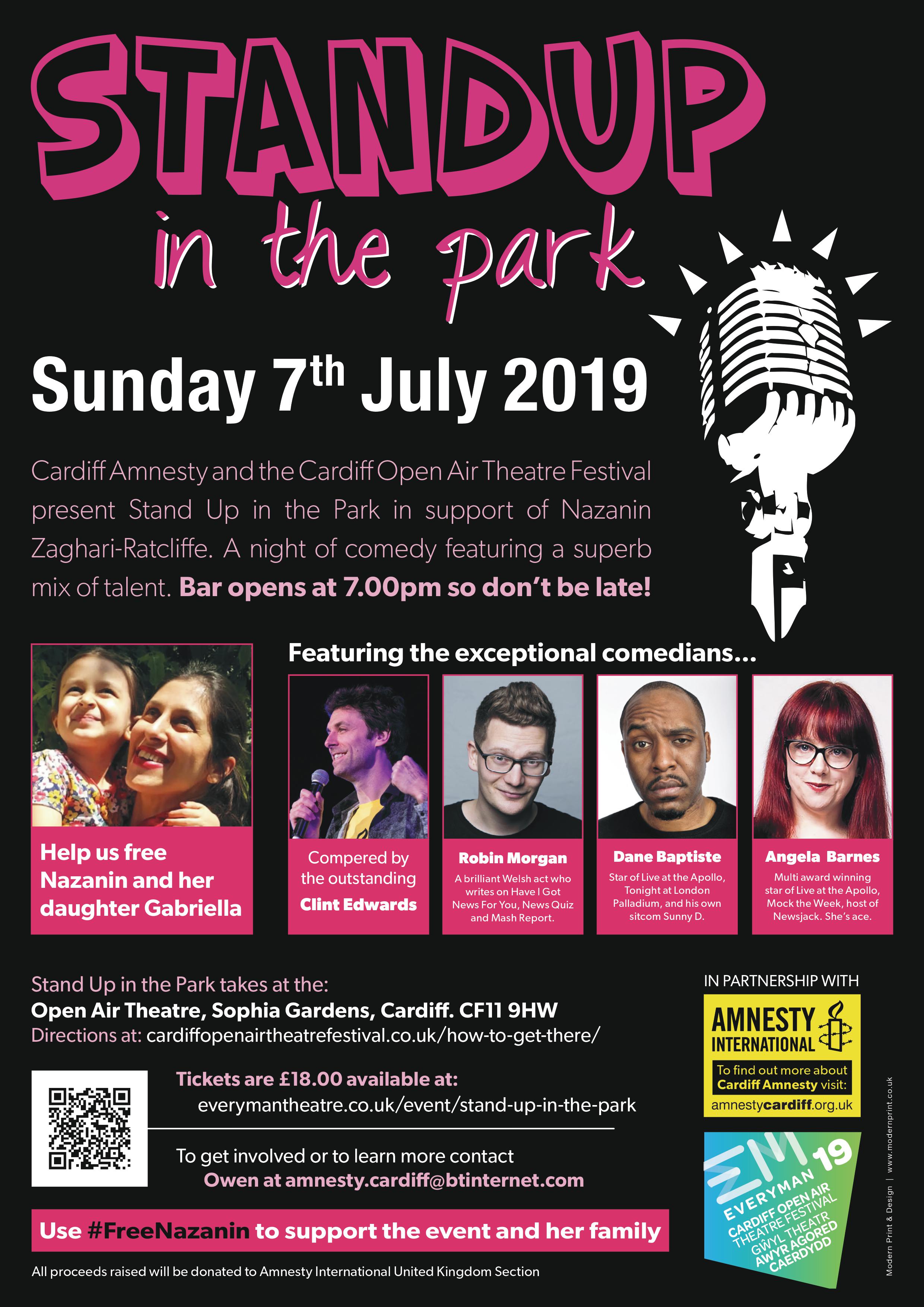 Amnesty International’s Cardiff group is to stage a high-profile comedy event in support of the jailed UK-Iranian woman Nazanin Zaghari-Ratcliffe.

The ‘Stand-Up in the Park’ event, part of the Cardiff Open Air Theatre Festival, will be held in Sophia Gardens on Sunday 7 July, and will feature well-known comedy circuit performers Dane Baptiste, Robin Morgan and Angela Barnes, with compering from Clint Edwards.

7 July will mark 1,190 days since charity worker Zaghari-Ratcliffe’s arrest on a family holiday in Iran in 2016, and at the event Cardiff Amnesty will unveil a giant knitted chain symbolising both the enormity of the injustice in the case and ongoing concern people in Cardiff and elsewhere in the UK have over her plight.

The 200-metre-long knitted chain – made up of multiple knitted links, each containing 1,190 stitches – has been produced by knitting enthusiasts from across the country after the Amnesty group sent out an appeal for help for the craftivism campaign.

Amnesty’s campaign for Zaghari-Ratcliffe’s release has been supported by almost 200,000 people.

“Thank you, Cardiff Amnesty, for organising the ‘Knit for Naz’ campaign, and to everyone involved in making this ‘chain of care’. Nazanin is very touched – I have told her that one day we will use the chain as decoration for a celebration.”

“This fantastic comedy event is yet another example of how people are coming together to demand Nazanin’s release. It promises to be a great evening, and hopefully before long we’ll see Nazanin out of jail and back home with her family where she belongs.”

What: ‘Stand-Up in the Park’ comedy event in support of Nazanin Zaghari-Ratcliffe

Nazanin Zaghari-Ratcliffe, 40, a British-Iranian dual-national charity worker, was arrested at Tehran’s Imam Khomeini Airport on 3 April 2016 prior to boarding a plane back to the UK after a regular family visit to the country with her infant daughter Gabriella. After being detained in solitary confinement without access to a lawyer, Zaghari-Ratcliffe was sentenced to five years in prison in September 2016 after being convicted of “membership of an illegal group” in a grossly unfair trial by a Revolutionary Court in Tehran.

Zaghari-Ratcliffe is presently serving a five-year jail sentence in Tehran’s notorious Evin Prison. Since being jailed, she has suffered a serious decline in her physical and mental health, something her husband has repeatedly drawn attention to during a high-profile campaign on his wife’s behalf. Her requests for periods of temporary release – for which she is eligible – have been met on only one occasion (last August), followed three days later by a return to jail. Amnesty described her return to jail on 26 August as a “crushing disappointment”. She is suffering from numerous health problems – including severe arm, neck and back pain – and there have been serious concerns over her mental state.

Amnesty has designated Zaghari-Ratcliffe a prisoner of conscience targeted solely for the peaceful exercise of her rights to freedom of expression and association. Amnesty has repeatedly called on the Iranian authorities to release her immediately and unconditionally.

In December, Zaghari-Ratcliffe completed her 1,000th day in detention, and three days prior to that she turned 40 in jail.