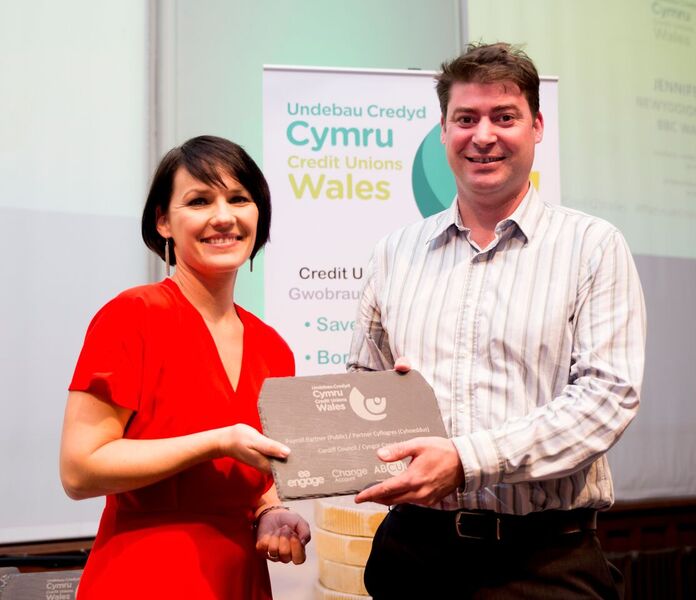 Three major Cardiff employers have received Credit Unions of Wales Awards for helping to improve the financial health of their workforce.

Cardiff Council, Cardiff Bus and the Cardiff-based offices of Legal & General were honoured for supporting the welfare of their staff by encouraging them to access a range of affordable financial services from their local credit union.

All three companies received their awards from BBC broadcaster Jennifer Jones at a ceremony in The Pierhead, Cardiff Bay on International Credit Union Day.

Cardiff & Vale Credit Union Chief Executive Leanne Herberg said: “We are so pleased to see our partners in Cardiff getting the recognition they deserve for being leaders in financial wellbeing in the workplace.

“All three winning payroll partners are examples of employers who care about their staff and understand the importance of helping employees to save regularly and access fair and affordable credit when they need to.”

“Their proactive approach has enabled thousands of Cardiff employees to take advantage of these benefits as a perk of their employment.”

By entering into a partnership with Cardiff & Vale Credit Union all three of the winning employers offer payroll schemes to staff which allows them to save and access affordable loans directly from their salaries into a credit union account.

Cardiff & Vale Credit Union now has 40 payroll employer partners, with over half of their 9,000 members using a payroll scheme with their employer to benefit from their services.

Ms Herberg added “The number of employers working with us is growing every month, which is really encouraging. We want to move to a position where all employers in Cardiff and the Vale of Glamorgan partner with us so all local working people can access these benefits.”

Jane Hutt AM, Patron of the Credit Unions of Wales also attended the event and launched a campaign for Welsh people to take a stand against high cost credit providers.

It comes following an announcement that people in Wales are more susceptible to over-indebtedness than any other country in the UK, with 440,000 at risk of being unable to keep up with credit repayments.

According to the study by the Money Advice Service, more than one in six people in Wales are at risk of being unable to keep up with credit repayments.

Michael Sheen, actor and founder of the End High Cost Credit Alliance said: “As a Patron of Credit Unions of Wales it’s an honour to support the awards in raising the profile of the great achievements made this year.

“Fair and responsible finance that can respond to the real needs of people in communities across Wales and the rest of the UK is core to my mission with the End High Cost Credit Alliance, of which I’m proud to say Credit Unions of Wales is an important member.”

“For the movement to win the battle against high cost credit, we need effective providers and that includes credit unions. So today is a great opportunity to showcase what works and to raise the profile so that more people join their local credit union. Congratulations to all of this year’s winners.”

The Credit Unions of Wales Awards were sponsored by ABCUL, Change Account, Engage and supported by the Welsh Government.