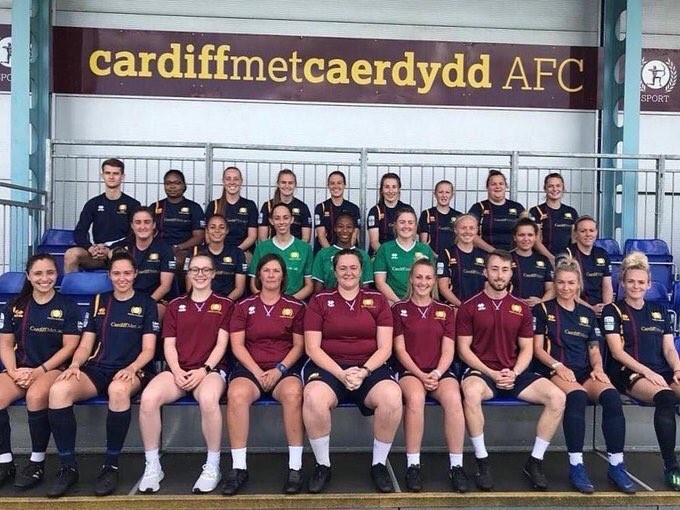 CARDIFF Met Ladies FC have secured themselves a place in the UEFA Women’s Champions League after another outstanding year for Cardiff Met Football.

The hard work of Cardiff Met Ladies FC has led them straight to Slovenia where they will play in group matches between Saturday and August 13. This follows on from a successful year for Cardiff Met football after the men’s team made it to Luxemburg for the UEFA Europa League in June.

The ladies’ first step in their journey to the Champions League took place in June as they came out on top in matches against Cheltenham Town Ladies and Buckland Athletic LFC, beating both teams 3-0.

The team, who are The Orchard Welsh Premier Women’s League champions, will play ŽNK Pomurje, the tournament hosts and local team, in their first match on Saturday. Three days after their first match Cardiff Met Ladies FC will go on to play tough side Scotland’s Hibernian and the final qualifier against WFC Nike from Georgia on August 13 before heading home to Cardiff.

The team will be supported by Utilita Energy who have extended their sponsorship of the universities men’s team to include the women’s. Utilita will be providing the team with shirts for the European campaign this year and next season’s league and cup programme.

Mike Davies, Chief Executive of Cardiff Met Student union, said: “We are all very proud of the team and everything they have achieved. They’ve all trained so well in the lead up to this point and we’re very excited for them to be heading off to Slovenia.

“We’re very proud to have them representing the University and will be cheering them every step of the way. We wish them all the best of luck.”

Cardiff Met Ladies FC long-standing manager, Dr Kerry Harris, who also delivers on modules in the areas of sport coaching and pedagogy at the University and is a former student there, said: “I’m incredibly proud of the team and their commitment to both the team and training. A Welsh team is yet to qualify for the knockout stages of UWCL and this is something I’ve constantly reminded the girls of – it’s kept us motivated and will carry us through in Slovenia. There’s no reason at all why we can’t be the first.”