The safety competition, which was launched at the beginning of the year by Wales & ex-British Lions player Tom Shanklin, urged children aged 5 to 11 to produce an eye-catching poster, poem or entry in another medium which was both informative and accurate and raised awareness of the dangers of CO poisoning and how to avoid them. The competition is supported by all UK gas networks, including the gas pipeline and emergency service for Wales and the south west of England, Wales & West Utilities. 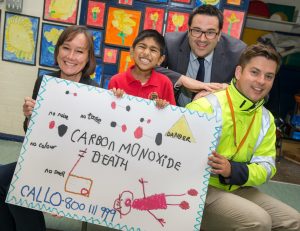 Marcos designed a poster which warned of the hidden dangers of carbon monoxide and included a signpost to the national gas emergency number – 0800 111 999.  As the winning entry from his category, Marcos joined other regional winners at the House of Commons where he collected a trophy along with a £150 cash prize for himself and £300 for his school.

Commenting on his win, Marcos said:

“I loved drawing my poster and I am so happy that I won. Visiting London was really exciting!”

MP for Cardiff Central, Jo Stevens, met with Marcos to congratulate him on the win and said:

“I’d like to congratulate Marcos on his winning entry. This competition is a great initiative to get children thinking about safety and how to communicate important messages. I’m proud that schools in Cardiff Central took part, giving their pupils an opportunity to learn and be creative.”

“Marcos captured key information about the hidden dangers of CO poisoning and he is a worthy winner.

“The competition was a huge success and this year we received more entries than any other gas network in the UK which we are delighted with. We hope that with everyone taking part they have been able to help spread the vital gas safety messages to their friends and loved ones.” 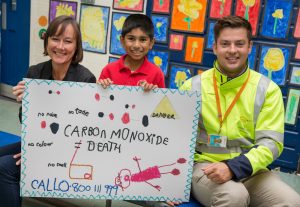 Wales & West Utilities, the gas emergency and pipeline service, takes pride in serving Wales and the south west of England. If anyone smells gas, thinks they have a gas leak, or suspects carbon monoxide poisoning, they should call us on 0800 111 999 and our engineers will be there to help, day or night.

The company also has a multi-million pound, 30-year gas pipe investment programme which began in 2002. Old metal pipes within 30 metres of buildings are being replaced with new long-lasting plastic pipes with a lifespan of more than 80 years, to make sure homes and businesses continue to receive a safe and reliable gas supply now and in the future.