Base + Barley, a sourdough pizza and craft beer restaurant located on Queen Street, Cardiff, has collaborated with local artist Nathan Wyburn to create a unique Manic Street Preachers portrait made entirely from pizza.

With May 2016 marking the 20th anniversary of the Manic Street Preachers’ epic album Everything Must Go, the Base + Barley team wanted to do something to celebrate the success of one of their favourite bands. In the spirit of rock and roll, however, they wanted to do something with a bit of flavour.
Nathan Wyburn is a Cardiff-based artist who has been gaining wide recognition for his foody creations following his success on Britain’s Got Talent, high profile commissions for clients including The Guardian and the 2012 London Olympics, as well as the release of his book. Nathan teamed up with the restaurant to create a one-off masterpiece.

During an intense three-hour studio session at Base + Barley, Nathan used the restaurant’s signature sourdough base and fresh ingredients to create a portrait of James Dean Bradfield, creating quite the social media buzz.

Nathan Wyburn said:
“I love working with fresh and unusual materials for my art, combined with my passion for portraiture. I find it’s great fun and I have been overwhelmed by the response that I have got. It all started with my Marmite portrait of Simon Cowell and has really exploded since then. I was delighted to help Base + Barley, as they are one of my favourite restaurants in Cardiff and was excited to get involved with the homage to Welsh music giants the Manic Street Preachers.”

Restaurant owner Paul Denham said:
“We are huge music lovers, and what goes better together than music and food? We’ve known Nathan for a while, since we met him at the Base + Barley launch party, so when we realised it was such a significant anniversary for the Manics we got really excited about the idea of creating something together. We hope the Manics are pleased with the portrait!”
The Manic Street Pizza will be on display at Base + Barley until 21st of May. To see footage and photos of the portrait being created search for #manicstreetpizza on Twitter and Instagram. 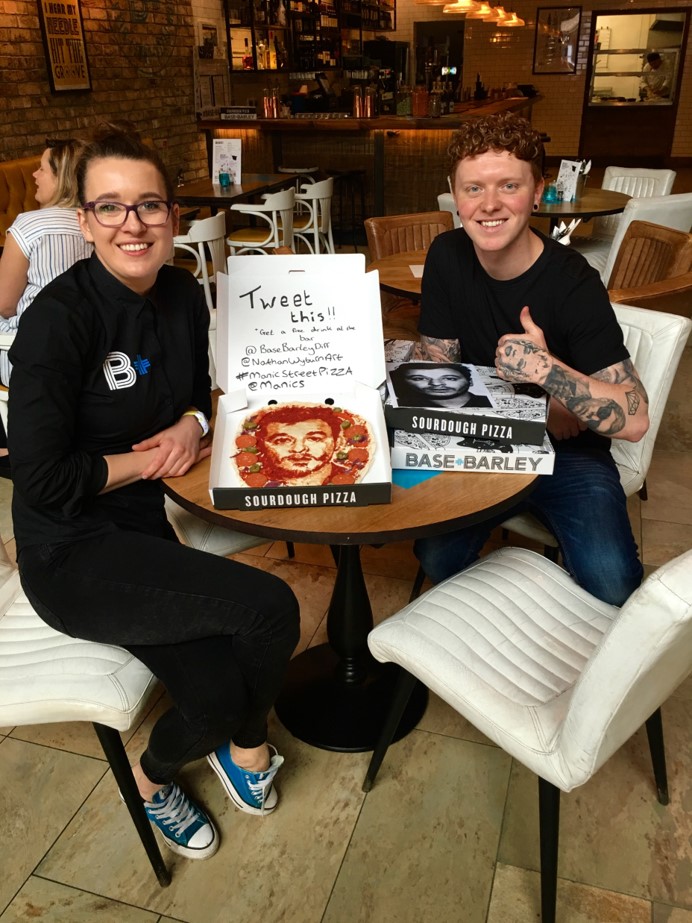