Cardiff school gets two very special visitors ahead of the Homeless World Cup. 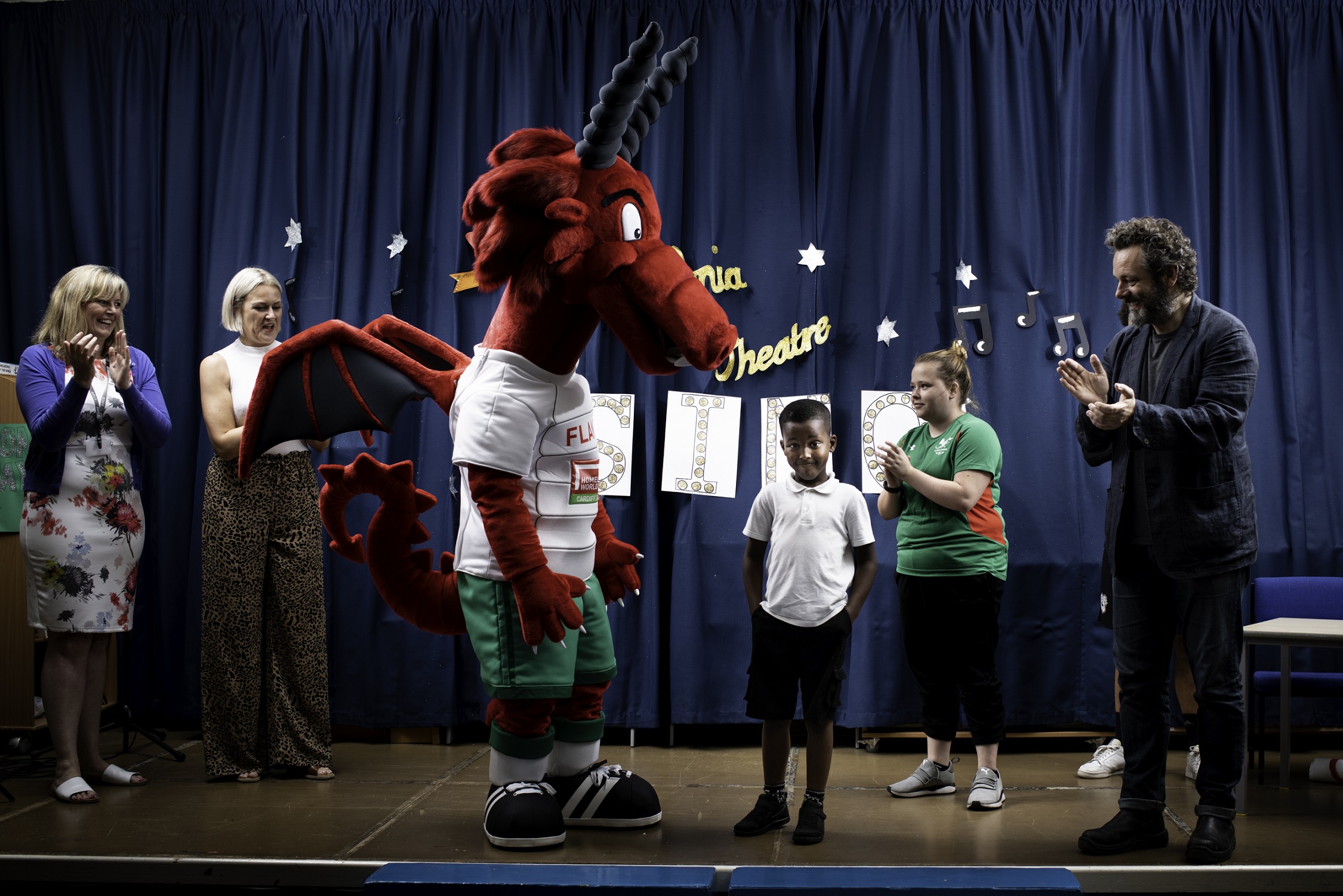 On Thursday 18 July 2019 the dragon mascot who will be entertaining football fans at the forthcoming Homeless Word Cup in Cardiff paid a special visit to meet the school boy who won a competition to name it.

Flame, the Homeless World Cup mascot, was accompanied by his good friend, actor and activist Michael Sheen, one of the organizers of the international tournament, to pay a special visit to Talha, 7, and his classmates.

The competition to name the Homeless World Cup mascot took place in May and was organised by the Homeless World Cup Foundation, with support from Cardiff City FC Community Foundation. The Foundation supports children, young people and families across South Wales through a range of programmes which aim to encourage education, improve health and build safer communities.

Children at St Mary the Virgin Church in Wales Primary School in Cardiff were surprised to find that their lessons had been cancelled this morning to make way for their two important guests.

Having won the competition Talha, was the first to meet Flame and Michael, where they chatted about the Homeless World Cup, and encouraged Talha’s classmates to come along to the event taking place in Bute Park from July 27 – August 3.

Talking about Flame, Michael Sheen said: “I always knew that we’d receive hundreds of fantastic names for our mascot, so choosing a name that best represented Wales and the Homeless World Cup was tough. However, Talha’s winning entry, Flame or to give it its Welsh name Fflam, really stood out – what better name to choose for a dragon!

“Flame will be at the tournament all day every day entertaining the crowds so make sure to come down and experience everything that the Homeless World Cup has to offer. Believe me, it’s a tournament unlike no other.”

The 17th edition of the Homeless World Cup will take place in Cardiff’s iconic Bute Park, right at the heart of the Welsh capital.

More than 500 players representing over 50 countries will travel to Cardiff to play in the week-long festival of football. Created to harness the power of sport in transforming the lives of people experiencing homelessness and social exclusion, over one million people worldwide have had their lives positively impacted by the tournament and its programmes since the first tournament in Graz, Austria in 2003.

In addition, the Bevan Tent, hosted in collaboration with independent think tank The Bevan Foundation, will provide a space for high profile speakers and the public to engage in discussion and debate about inequality and injustice. Plus, a number of big names from the music and entertainment worlds have been announced to play on a stage coordinated by PYST. These include Manic Street Preachers front man James Dean Bradfield, Charlotte Church’s Late Night Pop Dungeon, Gwenno, The Joy Formidable and former Gorky’s Zygotic Mynci Euros Childs.