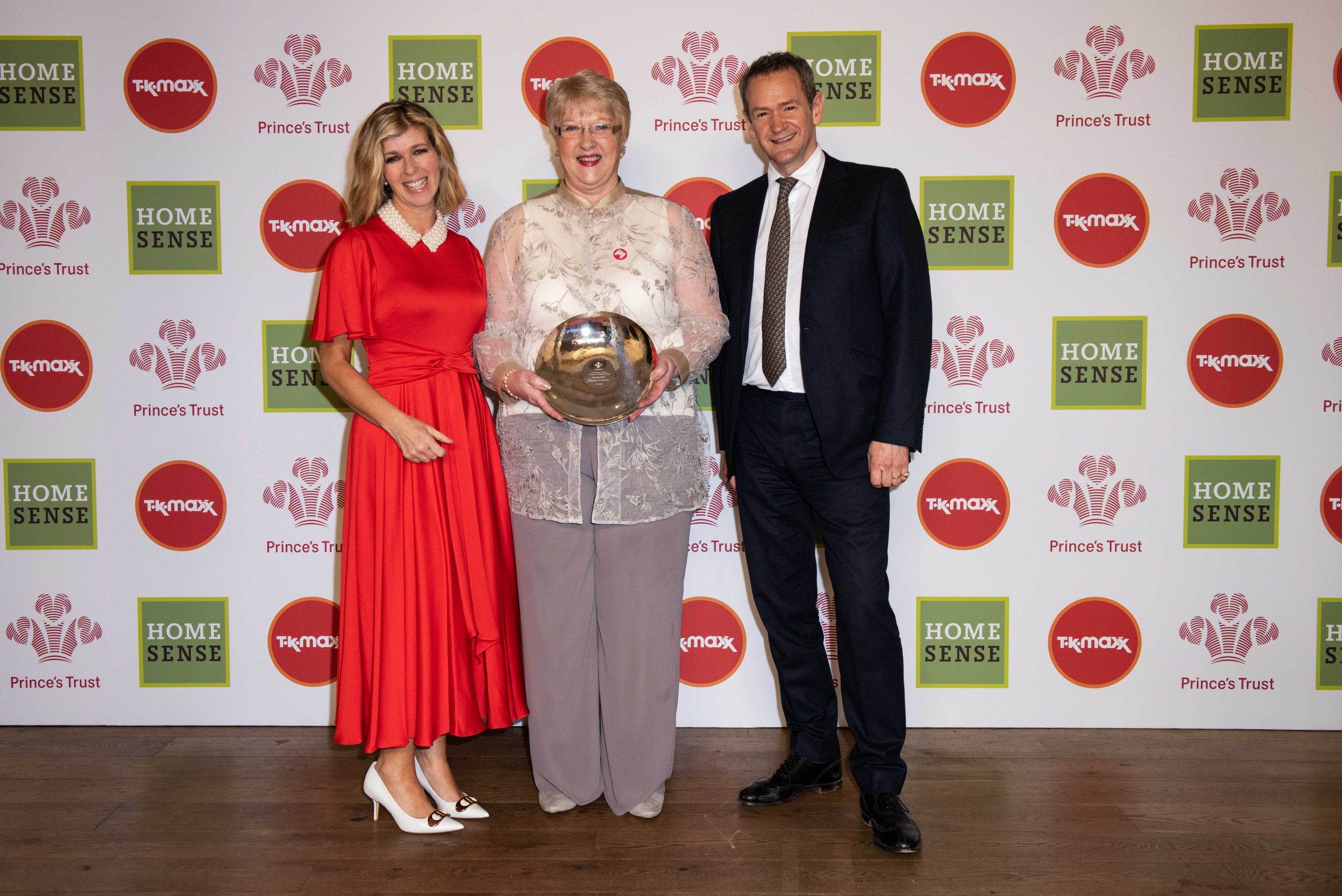 Pat Grant, 72, from Cardiff, has received a top award from HRH The Prince of Wales for volunteering with The Prince’s Trust Cymru for almost four years, which she started after finishing a career in social work. Pat scooped the prestigious Volunteer of the Year Award at the ceremony held at The Palladium in London yesterday. The event was hosted by Ant and Dec and attended by celebrities including Pierce Brosnan OBE, Harry Kane MBE, Ashley Walters, Micheal Ward and Richard E. Grant.

The Prince’s Trust and TK Maxx & Homesense Awards recognise young people who have succeeded against the odds, improved their chances in life and had a positive impact on their local community.

“Volunteering is better than botox”

Pat initially left work to look after her mother, who had Alzheimer’s and her aunt, who had depression and bipolar disorder.

“I loved working, but I had to put my family first. I couldn’t teach my two sons to have good family values if I wasn’t acting upon them myself. I spent a portion of my working life as a social worker arranging packages to support carers, but until the need for a carer reached my own family, I never really understood the reality of the role. My caring role meant I needed to give up my career, and this left a big gap in my life.”

After her mother passed away, Pat’s friend encouraged her to try volunteering.

“I didn’t want to ‘just’ volunteer; I wanted to do something that also gave me sense of fulfilment, which is when my friend mentioned The Prince’s Trust Cymru.”

During her time volunteering with The Trust, Pat has worked with young people across a variety of programmes, sessions and events held in centre. Pat has supported mock interviews, CV writing sessions and Heaven’s Kitchen, a cooking session where young people from all backgrounds come together to prepare a meal for senior figures in the local community. Recently, Pat supported a meal prepared for The First Minister for Wales, Mark Drakeford.

“When I was in work, I got a great buzz from training other people but unfortunately never had the opportunity to work with young people. Volunteering with The Prince’s Trust Cymru has offered me the chance to do this. Seeing young people get opportunities to learn in a safe environment without being judged is so inspiring to me; and it gives me great fulfilment that I have played a part in changing young lives. Sometimes the simplest things can have the biggest impact, even just helping someone to fill out a form!”

Pat is now a leading member in the newly formed Volunteer Support Group. Working closely with five other volunteers to shape the future of how people give their time to The Prince’s Trust in Wales.

“The more I volunteer with The Prince’s Trust Cymru the younger I feel – it’s better than botox!”

On winning the award, Pat said: “I have had a fantastic day! I love volunteering for The Trust as it gives me a chance to support young people. Sharing a stage with the other winners and an inspiring group of young people, it reminded me just how important the work of The Prince’s Trust is. I am so proud to be involved in it”

Pat’s award was presented by Kate Garraway and Alexander Armstrong.

“Pat’s incredible volunteering work has helped countless young people achieve their goals as well as providing her a hugely rewarding experience. Giving up her time in this way and leading the Volunteer Support Group is such an amazingly selfless thing to do and I hope this award proves how thankful everyone at The Prince’s Trust is to her.”

Kate Garraway added: “After meeting Pat, I’m not at all surprised that she won the Volunteer of the Year Award. Her positive spirit is contagious, and I can see what a fantastic role model she must be for the many young people that she’s supported over the past four years.”

TK Maxx and Homesense have been a partner of The Prince’s Trust since 2013 and are one of The Trust’s largest delivery partners of the Get into Retail programme. This is a two to six week course that develops young people’s skills in the retail sector and supports them into positive outcomes in retail. Since the partnership began, over 70% of young people who have taken the course went on to full time employment at TK Maxx or Homesense.