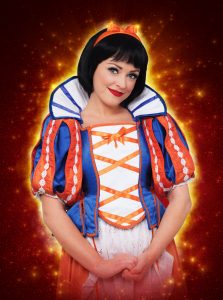 Having graduated from the Arden School of Theatre, Stephanie has gone on to appear on television and in numerous stage productions on land and sea across the globe including headline roles on board luxury cruise liners and last year continued her nautical career by starring opposite David Hasselhoff as Mimi the Mermaid in Peter Pan at the New Theatre having previously appeared with him on tour in Last Night a DJ Saved My Life respectively.

In 2015 Stephanie auditioned for the BBC One talent search The Voice, receiving the fastest reaction from will.i.am upon hearing her spectacular singing voice. Throughout her stint on the competition Stephanie was mentored by Tom Jones and she continued to wow the judges and audiences alike with her winning personality and stage presence. In 2016 Stephanie also starred alongside Charlotte Church in her 2016 Festival of Voice production The Last Mermaid in Cardiff.

Stephanie joins Samantha Womack as The Wicked Queen, Gareth ‘Alfie’ Thomas as her Henchman and X Factor star Chico as the handsome Prince. This year’s pantomime will also see Stephanie reunite with Mike Doyle (the Nurse) and Tam Ryan (Muddles) having starred alongside them in Peter Pan and Last Night a DJ Saved My Life.

Staged once again by Qdos Entertainment, the world’s biggest pantomime producer, and the team behind the annual New Theatre panto, Snow White and the Seven Dwarfs will feature all of the traditional pantomime ingredients Cardiff theatregoers have come to expect in a fantastic new production of the well-loved fairy tale.

Speaking on her role, Stephanie Webber said: “I’m absolutely delighted to have been asked back to appear at the New Theatre by Qdos Entertainment, and after last year as a Mermaid I can’t wait to get back on dry land and be a Princess this year. The cast are amazing and I can’t wait to work with Samantha, Gareth and Chico, and I’m really looking forward to working with Mike and Tam once again. It’s going to be a fantastic show!”

With over 25,000 theatregoers already attending this year’s pantomime, audiences shouldn’t leave it any longer to book for the fairest panto of them all. Snow White and the Seven Dwarfs runs from 9 December 2017 until 14 January 2018. Tickets are available from www.newtheatrecardiff.co.uk or from the Box Office on 029 2087 8889.