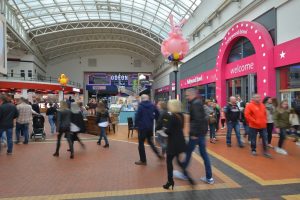 From pop stars to popcorn – to the world’s most expensive milkshake – as it gears up to welcome a whole host of events to celebrate it twentieth anniversary this month (August), it’s safe to say the Red Dragon Centre in Cardiff Bay has had quite an eventful two decades!

August 1997 – Will Smith and Puff Daddy both hit number one in the charts – Men in Black and I’ll Be Missing You were surely songs of the era; and anyone who was anyone was addicted to Friends.

It was also the month that Louise (then still Nurding) of Eternal fame opened The Atlantic Wharf Leisure Village – as it was originally known – in the centre of Cardiff Bay, in front of hundreds of excited fans.

Promising to be the ultimate entertainment destination for South Wales, the now Red Dragon Centre boasted a state-of-the-art 26 lane bowling alley with Hollywood Bowl and a twelve screen cinema in the form of the ODEON Both former venues are still at the Centre today with ODEON seeing 15 million film goers through its doors in the last twenty years. The cinema also now features the only IMAX in South Wales.

Another outlet that has been part of the Red Dragon Centre’s journey from the beginning is Italian favourite Bella Italia. Previously known as Mamma Amalfi, Bella Italia has over the last two decades served 200,000 pizzas, 450,000 pasta dishes, and 2.5 million meals. If you stretched out all the spaghetti dishes served, it would total 500 miles.

Capital FM South Wales has been broadcasting its popular radio programmes from its studio within the Centre since the turn of the millennium and has so far clocked up an impressive 148,000 hours of broadcasting. Guests to have graced the Cardiff Bay studio include Westlife, Keith Lemon, James Cordon, Ruth Jones, Little Mix, McFly – and not forgetting, Keith Chegwin!

In 2004, the Centre added to its entertainment offering with the opening of the Grosvenor Casino – a popular post-cinema haunt for those looking to place their bets on a good night.

Famously, Grill & Shake created the world’s most expensive vanilla milkshake to celebrate last year’s National Vanilla Milkshake Day. The exclusive £50 ‘Millionaire’s Milkshake’ included some of the most expensive ingredients from around the world including Tahitian vanilla pods, rich Jersey milk, strands of saffron, 23ct edible gold leaf, shavings of Italian black truffle from Umbria and Amedei chocolate from the Tuscany region of Italy.

Speaking ahead of this big milestone, Marketing and Tenant Liaison Manager Emma Constantinou – who has been at the Centre herself for 11 years, since starting back in 2006 said:

“So much has changed since the Red Dragon Centre opened back in 1997 – but then so much has stayed the same too; in that we still do what was always set out to be done and provide a top class entertainment destination in the heart of what is now a truly bustling Bay area.

“We’ve seen some great things – and great people – come and go here over the years; no more so that the 45million visitors we’ve welcomed.  I’m looking forward to a month of celebration ahead and welcome everyone to come and join us and all we have planned!” 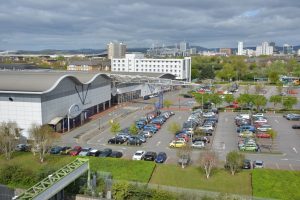 If this wasn’t enough food for thought, check out these fun fast facts about the Red Dragon Centre’s impressive history:

20 facts you might not know about the Red Dragon Centre:

9  Harry Potter and the Philosopher’s Stone

12  The Lord of the Rings: The Return of the King

13  The Lord of the Rings: The Two Towers

17  Harry Potter and the Chamber of Secrets

20  The Hobbit: An Unexpected Journey