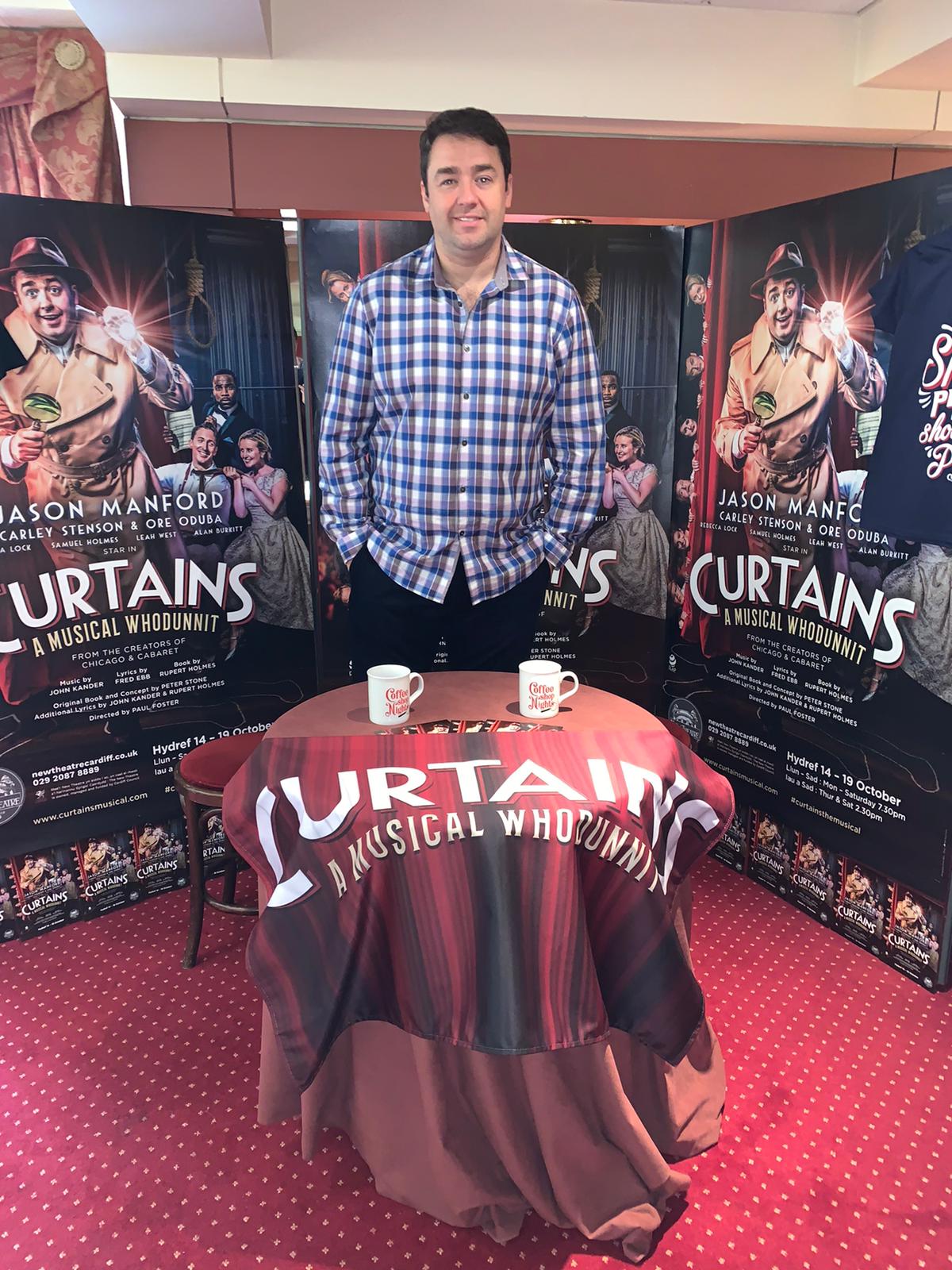 CURRENTLY AT NEW THEATRE IN CARDIFF UNTIL SATURDAY 19TH OCTOBER, JASON MANFORD IS APPEARING IN CURTAINS. CARL MARSH CHATTED TO HIM EARLIER THIS WEEK.

EVERYONE WILL PROBABLY KNOW YOU AS THE COMEDIAN SO IT MUST BE NICE BEING ASKED TO DO SOMETHING LIKE CURTAINS,  A MUSICAL SHOW; BUT ISN’T MUSIC IN YOUR FAMILIES BLOOD?

It’s a massive privilege, but I think performing in general and being on stage, or the telly (sic) or radio is a privilege, but it can be hard as I know finances can play a part in peoples decisions. I think you should only be picking stuff that you feel is ‘really’ worth it. Is this ‘worth it’, is it worth people spending £25-£30 on to come and see your show. My grandparents were Irish folk singers who came over from Dublin in the 1950s, and they had eleven children. And they all became singers or entertainers in that family. My mum’s a nurse but other than that, the rest of them are entertainers. I grew up in this very localised show business family. I think if I had said to my family that I was going to become an accountant, they would have said: “I don’t think so, get on that stage!” Like you say, it was always something that was in the blood but then stand-up just sort of took over. I just hit (comedy) at the right time and fell into it, and loved it, and that took off. I then left singing and acting to one side because I wasn’t earning as much.

HOW DID YOU FALL INTO COMEDY, AS I READ THAT IT WAS ON THE ADVICE OF THE LIKES OF PETER KAY?

I had a lot of good early advice from some good people, Peter (Kay) being the main one but I also just loved it, I still love it. Stand-up is my favourite job that I do out of everything because it’s just me and the audience. I love putting the effort in and reaping the rewards, but it can be quite a lonely job. That’s what is lovely about doing a musical where you are part of a company, and you’re suddenly part of a family. You do the tour and then at the end of it, like being in any family, you can’t wait to get away from it and be by yourself again! [laughs].

YOU’VE DONE MUSICALS BEFORE, SO YOU MUST LIKE THEM?

This is my fifth or sixth, I think. My first one was in 2012, and I did Sweeney Todd with Michael Ball and Imelda Staunton. That won all sorts of awards like Olivier Awards, and I just had a small part in that. Then I toured with The Producers, Chitty Chitty Bang Bang and then last year I did  Guys and Dolls. Then it’s this one. I’ve dotted them in between my stand-up tours.

HOW HAVE YOU PREPARED FOR THIS ROLE IN CURTAINS, AS YOU PLAY LIEUTENANT FRANK CIOFFI?

I watched a lot of Columbo! He was my primary source of inspiration [laughs], Peter Falk. I watched mainly Columbo and a lot that was detective stuff. The reason that I mainly watched Peter Falk was that not only is this guy (in Curtains) a brilliant detective but he comes across as a bit naive, he is never the alpha male in a room. There are usually lots of people around him who think they are smarter than him, and that was always the great thing about Columbo, he was clever at
doing all that. Accent wise, which was the Boston accent, I played with it a little by watching a lot of Ben Affleck, Matt Damon and Mark Wahlberg films. Then I went back and listened to a lot of John F Kennedy speeches, and there is a bit of Jimmy Stewart in there (Laughs while doing the Jimmy Stewart accent).