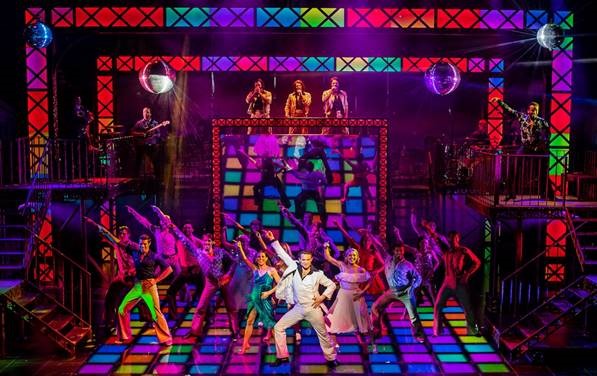 Currently showing until the 1st December at the Wales Millennium Centre in Cardiff is the stage production of Saturday Night Fever. If you can recall, (those old enough to remember) that this film ‘only’ became a massive hit once the music was in the charts at the time, so it makes sense that Bill Kenwright’s production of Saturday Night Fever is all about the music, dancing, and with enough dialogue from the film to give the audience an idea of the storyline.

Tony Manero is the main character and he is a typical young Italian from Brooklyn, New York that still lives with his parents but yearns to be getting his own place, over the bridge, in Manhattan. He also is an outstanding disco dancer that dreams of bigger things. Playing the role of his sexual attraction is Kate Parr, she plays Stephanie Mangano, somebody trying to leave behind her Brooklyn upbringing and accent. She has made the move to Manhattan yet still dances in Brooklyn, obviously out of her depth with the college graduates in Manhattan where she works, she still feels at home, back on home soil, in Brooklyn.

Playing the role of Tony Manero is Richard Winsor, (yes it is he from Casualty, yes!) – I barely recognised him, but in a good way! He was fascinating to watch, it was hard to think that this ex-Doctor from a BBC show had so much skill, stamina and talent as a dancer. He was breathtakingly sublime. After the show I was worn out for him, like I myself had been dancing with him through the show. I was definitely foot-tapping and singing along to the songs throughout.

Storywise, it is a rollercoaster of the ups and downs that life, in 1970’s New York was all about at the time. This production, which thankfully did omit ‘a lot’ of the bad language seen in the movie, and of the devastating scene towards the end of Bobbie C’s death, which not omitted but done in a way that was handled so well, told the story, yet without going too far. And that dreaded rape scene in the movie with the character Annette, her screams were heard in the auditorium, again the point made, and (thankfully) was over in seconds for this production. I can only commend Bill Kenwright for how this was depicted in this show. Much respect also to Raphael Pace and Olivia Holding, who played the parts of Bobbie C and Annette, they nailed their performances. All the cast did. I could list all of the cast members for providing me with a breathtaking delight of an evening spent watching some of my favourite songs, performed from a film that I love, and in a venue so majestic, it could have not been any better.

Musically, I don’t know where to start. Everybody with a TV or radio, that has been alive in the last 40 years will know, probably ‘word for word’ one or more of the songs from this production. I would say that the audience was ‘itching’ to get up and dance right from the raising of the curtain. Clapping and the odd wolf-whistle when Richard Winsor was getting dressed as his character Tony, it made the night and the show much more personal to the audience.

The Bee Gees are actually in the show, singing their songs when needed. On paper I would say this is quite a daring thing to do, but having the roles of Barry, Maurice and Robin Gibb played by Edward Handoll, Alastair Hill and Matt Faull respectively; this made the show, and the night for me, all three were mesmerising, that at times I thought I was listening to my iTunes tracks of the original movie as they were so close to the original music, it was like stepping back to 1977 and watching Top of the Pops! They really did the songs justice and with such finesse and timing, that it made the room glow, and I don’t just mean with the glitter ball working on the ceiling. It brought the audience to the stage, and the stage to the audience.

Catch the show before it is too late! Outstandingly good!