CelebAbility Returns To ITV2- Do You Have What It Takes? 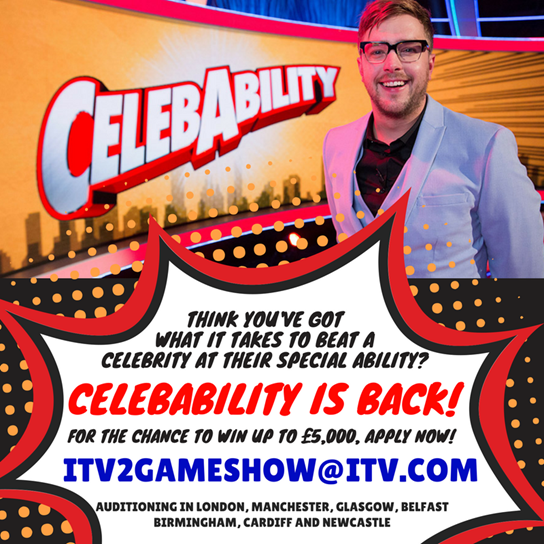 CelebAbility, TV’s most chaotic and crazy show returns to ITV2 later this year for a second series in its continued quest to discover more unique skills and abilities possessed by celebrities.

After a successful first series (the youngest profiling new show on the channel – 62% of viewers aged between 16-34), series 2 has been extended from 6 episodes to 8.

The comedy entertainment show from Potato (makers of Ninja Warrior and The Chase) is from an original idea devised by Mor or Les Productions.

Hosted by the voice of Love Island, Scottish stand-up comedian Iain Stirling who is joined again by his trusted adjudicator Marek Larwood.

Hoping to win £5,000, a group of friends will go head to head with celebrities in a series of uniquely crazy rounds. All of which are based on the unusual skill or ability that the celebrities believe they naturally possess.

“We are delighted that CelebAbility is back. This time round it’s going to get even more silly and definitely more competitive, so good luck to Iain Stirling and Marek Larwood as they try to keep order in the studio…let the battle begin.”

“CelebAbility is back and I cannot wait! Celebrities doing tasks against the members of the public – who will come out on top?” says host Iain Stirling.

“We had an absolute ball making CelebAbility last year and then it turned out to be ITV2’s highest rating new series of 2017. Hurrah! We can’t wait to discover what hidden talents can be unearthed through extensive, in-depth and probing research of our nation’s best-loved celebrities, get them in the studio with Iain & Marek and let the fun begin.”

Do you think you have what it takes to beat a celebrity?

The team are currently looking to cast enthusiastic competitors like you! Email [email protected] if you are interested.

CelebAbility has been commissioned for ITV2 by Paul Mortimer, Director of Digital Channels and Acquisitions and Saskia Schuster, ITV’s Comedy Controller.

CelebAbility is a Potato production from an original idea devised by Mor or Les Productions.