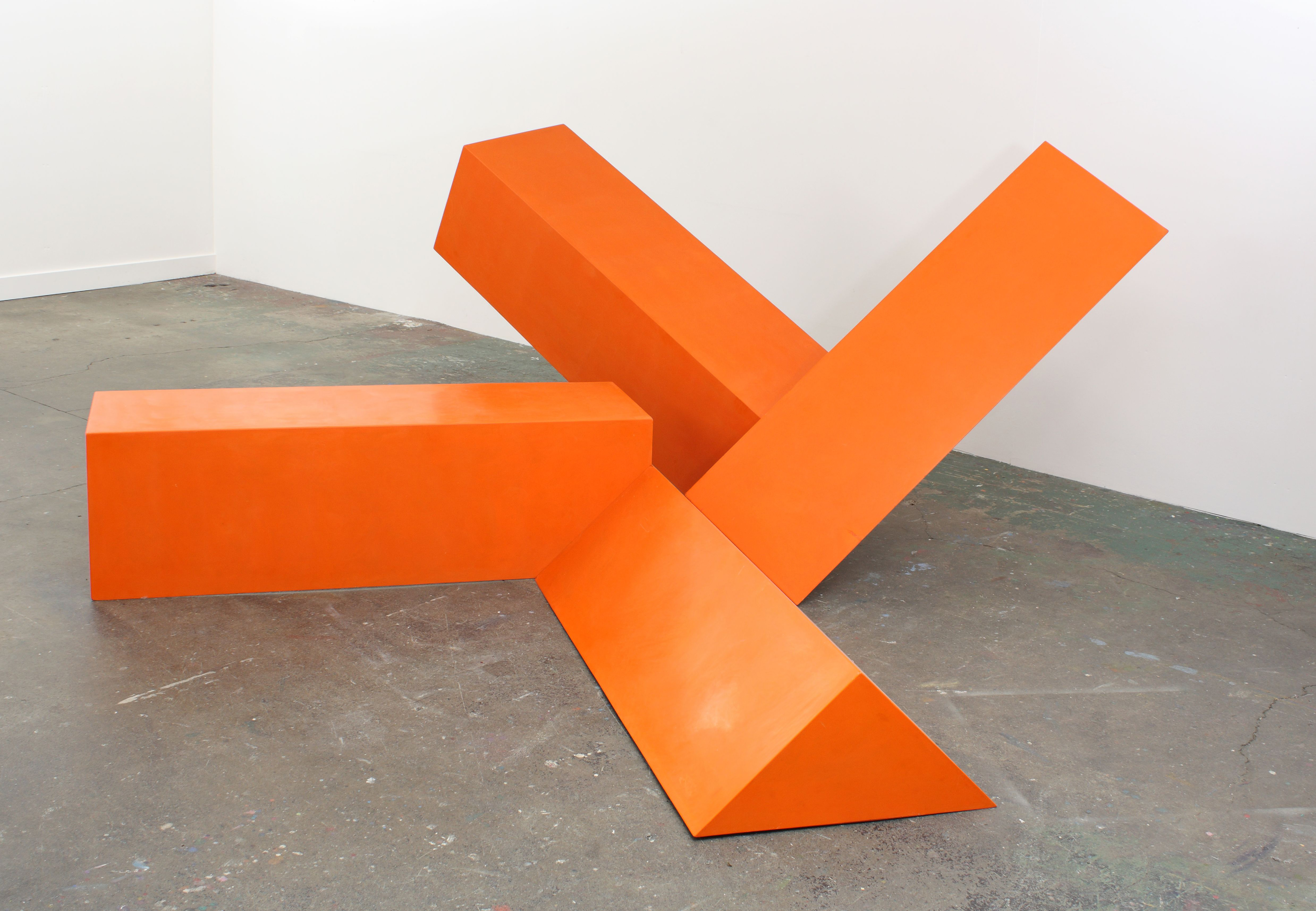 GARTH EVANS: BUT, HANDS HAVE EYES

‘But, Hands Have Eyes’, is a solo exhibition featuring six decades of sculpture. Alongside works produced in the UK in the 1960’s and 70’s, Evans will also present a body of work for their UK premiere, that he has produced in the United States since his move there in 1981.

The work of Garth Evans is integral to the history of British sculpture. His practice has largely been defined by the use of geometric, asymmetrical forms and a commitment to simple, everyday materials. Evans is noted for a body of work that offers a bridge between 1960’s modernism and the lyrical experimentation with a broader range of materials that followed.

Experimenting with the potential of scale, weight, medium and form, Evans’ work comprises both a formal and conceptual approach. He is always interested in interrogating established boundaries and, as a result, his sculptures are made from a diverse range of materials including ceramics, steel, leather, and fibreglass. Evans states that many of his works, even when most abstract, are ‘triggers for, and containers of, particular identifiable memories’. Ultimately, Garth Evans’ works are ambiguous, multi-faceted and completely original.

In 1972 Garth Evans created a large-scale sculpture that was placed in The Hayes, Cardiff city centre for six months as part of the Peter Stuyvesant City Sculpture project, which saw 16 new works sited at the heart of eight cities across the UK. The project was a ground-breaking and significant chapter in the history of public art and social engagement.

Garth chose Cardiff as the location for his work as he had very strong family connections with Wales and his Welsh grandfather’s tales of his time as a miner were hugely influential in the sculpture’s form – evoking both a hammer-like tool and the image of a mine tunnel that was as black as coal.

Garth Evans explains: “My mother grew up in the small mining village of Pencoed and my grandfather and my mother’s brothers were coal miners in the region. As a child, I spent summers in South Wales and I vividly remember listening to my uncles and other men talk of their lives underground, in the dark. I wanted to make something that I felt had a connection to the coal mining and steel making industries of South Wales.”

After the project, the sculpture was relocated to Leicestershire where it has remained hidden, neglected and unseen by the public ever since.

Following a successful crowdfunding campaign supported by Art Happens with Art Fund, the generous donations of the public have enabled us to carry out the specialist restoration that is so desperately needed.

In a unique project, Chapter is now able to return the work to its original location, for six months, almost 50 years after it was first seen.

‘There’s not much beauty in it. I can’t see no beauty at all in that.’ 1st Man

The day after the sculpture was first installed in 1972, Evans traveled to Cardiff city centre and anonymously recorded the comments of passers-by. The transcript of these fascinating recordings forms the basis of this original play that will be presented in Chapter’s Seligman Theatre.

Adapted by award-winning writer Leila Philip, ‘The Cardiff Tapes’ is directed by Wayne Vincent and presented in partnership with Everyman Theatre Cardiff.

Garth Evans was born in Cheshire in 1934 and studied sculpture at the Slade School of Fine Art, London and now lives and works in North East Connecticut, USA.

Since the 1960’s, Evans has exhibited widely across the UK and USA including in the influential group exhibitions ‘British Sculpture ’72’, Royal Academy of Arts, London (1972) and ‘The Condition of Sculpture’, Hayward Gallery, London (1975). In 2013, artist Richard Deacon curated the survey exhibition ‘Garth Evans’ at Yorkshire Sculpture Park.

Exhibition supported by The Henry Moore Foundation and Hales Gallery. The sculpture project is supported by Art Fund through Art Happens, Studio Response, Anthony Stokes, Landsec, Cardiff City Council and the many donors and supporters who made the restoration and relocation possible. Cardiff: The Play is produced and presented in partnership with Everyman Theatre Cardiff, directed by Wayne Vincent and made possible by the support and dedication of the cast and crew.

Chapter is a multi-art form contemporary arts venue based in Cardiff, Wales that produces and presents international art, performance and film.

Everyman Theatre Cardiff was founded in 1942.

It started life as the Unity Theatre Group, focusing on mainly political theatre, but later broke away and embarked on its own policy of presenting experimental live theatre.

In the 1970’s Everyman was instrumental in the opening of Chapter Arts Centre and continues to concentrate its productions at the Canton base.

About Art Happens and Art Fund

Art Happens with Art Fund is the UK’s only crowdfunding platform for museums and galleries. Since launching in 2014, 34 museums have raised over £500,000 for art and cultural projects across the country, ranging from the conservation of works of art to new exhibitions and commissions by leading artists. Art Happens was recognized in 2016 with an Emcees Arts & Culture Award for Excellence in Fundraising for ‘Best use of digital channels in a fundraising campaign’. Previous campaigns include projects by Museum of London, Norwich Museum and Art Gallery at The Bridewell, and Turner Contemporary, Margate.

Art Fund is the national fundraising charity for art. In the past five years alone, Art Fund has given £34 million to help museums and galleries acquire works of art. It also helps museums share their collections with audiences by supporting a range of tours and exhibitions and makes additional grants to support the training and professional development of curators.