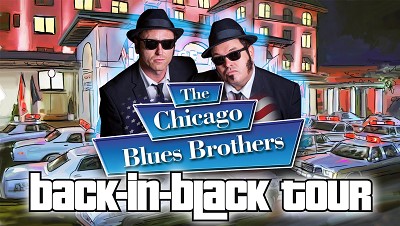 The award-winning Chicago Blues Brothers are back in town with their back-in-black show which comes to Cardiff, St David’s Hall on 1st June.   This non-stop party show, the world’s leading tribute to the legendary Blues Brothers, is packed with over two hours of the greatest blues, Motown and soul songs from both Blues Brothers movies (1980 and 1998).

Back-in-black stars Chris Hindle as Joliet Jake Blues, and Gareth Davey as Elwood Blues who are joined onstage by a top live band, a kick-ass brass section and backup vocalists, not to mention a Blues Brothers-style set, lights and totally rock ‘n’ roll design, complete with trademark shades.  The show, a ‘high octane, adrenaline-pumping musical mash-up’ is jam-packed full of more than 40 songs by legends such as Aretha Franklin, James Brown, Otis Redding, The Temptations, Ray Charles, Tina Turner, Cab Calloway – plus many others.  The show won the National Tribute Award and regularly thrills audiences across the UK and internationally with its unique take on the Blues Brothers legend.

The Chicago Blues Brothers is hugely entertaining and captures the sound, energy, humour and characters that propelled John Landis’ classic 1980 film to worldwide fame.  ‘The Blues Brothers’ starred John Belushi, Dan Aykroyd, Carrie Fisher, Aretha Franklin, James Brown, Cab Calloway, Ray Charles and many more ultimately made quadruple its budget and achieved worldwide cult status.  The Chicago Blues Brothers take audiences back to 1980 to finish their show at the Palace Ballroom Hotel – the Chicago location where the original Blues Brothers were booked for their first major gig.  The audience become part of the show as they’re encouraged to sing along and dance in the aisles! 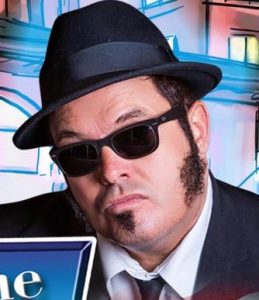 Chris Hindle is the driving force behind The Chicago Blues Brothers; Chris is the producer of the show and takes the lead role of Jake, the role originally inhabited by the legendary John Belushi.  From stage set to art work, social media to arrangements – Chris is right there at the heart of everything.

Chris trained at the De Costa Academy of Singing in York; a natural tenor and performer, he was able to hit the high notes required of Italian opera with ease but his musical passion laid elsewhere. In Joliet Jake Blues, Chris has truly found his calling. 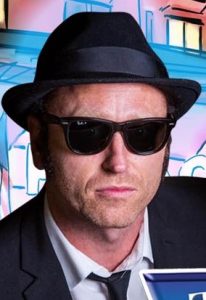 Chris and Gareth have been best friends for over 16 years; they are both professional wind up artists and enjoy playing tricks on everyone in the band and members of the public. Their off stage friendship is one of the magical aspects that makes the Chicago Blues Brothers such a fun and unique show.

CHRIS HINDLE: Working with a great cast of musicians, getting to play all over the world doing something you love!  And for me it’s the chance to carry on the legacy of the legendary John Belushi as Jake Blues; he was a crazy, funny guy who was unpredictable and wild – very much like me!
GARETH DAVEY: It has to be the music – and I love dancing so to play Elwood gives me the chance to really let rip with my moves onstage!

What’s your favourite part of the show?

CHRIS: It’s the initial walk out onto the stage; as Jake and Elwood walk on, a roar always goes up from the crowd.  It never fails to send a tingle down my spine and I know it’s the start of something magical for the next two hours.

GARETH: I love meeting everyone after the show.  We always go out to the foyer to chat and do photos with members of the audience.  It’s a great opportunity to meet people and to thank them for joining us.

CHRIS: The Blues Brothers is a 40 year old brand – it’s been done well and it’s been done badly…we do it differently!  We’ve jump started it for a new generation and to see and hear the audience’s reaction to what we do is amazing.

GARETH:  I love seeing new places and meeting new people.  This music always goes over no matter where we play – from Latvia to Dubai we never fail to have fun and to do this as a job is simply the best.

CHRIS: Yorkshire tea, my best mate Gareth ( Elwood ) , lots of laughter, a comfy hotel bed, my DJI Mavic Drone ( it goes everywhere with me )
GARETH:  Having a great team to work with, wind-ups, Frizzel, the Elwood case (which holds a lot of secrets) and Wetherspoon’s food.

And finally what’s the audience reaction like when you’re onstage?

CHRIS:  You have to experience it to believe how awesome it is, laughter, smiling faces, people dancing and a room full of amazing energy!
GARETH:   We bring everyone together for one night of fun, it’s like a massive party – young or old it matters not, you’re in for a great ride!

“If you want to go and see a show that has an extremely talented band, great vocalists, humour, dancing, feel thoroughly entertained and leave feeling like you have just been to a huge party then look no further than The Chicago Blues Brothers.”  Whatsgoodtodo.co.uk

“Closing the show with ‘Let the good times roll’ had the whole audience up on their feet…a foot-stomping 2 hours of infectious fun and some of the best entertainment anyone could ask for…” (Nightsoutinnewcastle.co.uk)

“Hats off to The Chicago Blues Brothers for bringing fun and laughter to Manchester!”

To book your tickets visit