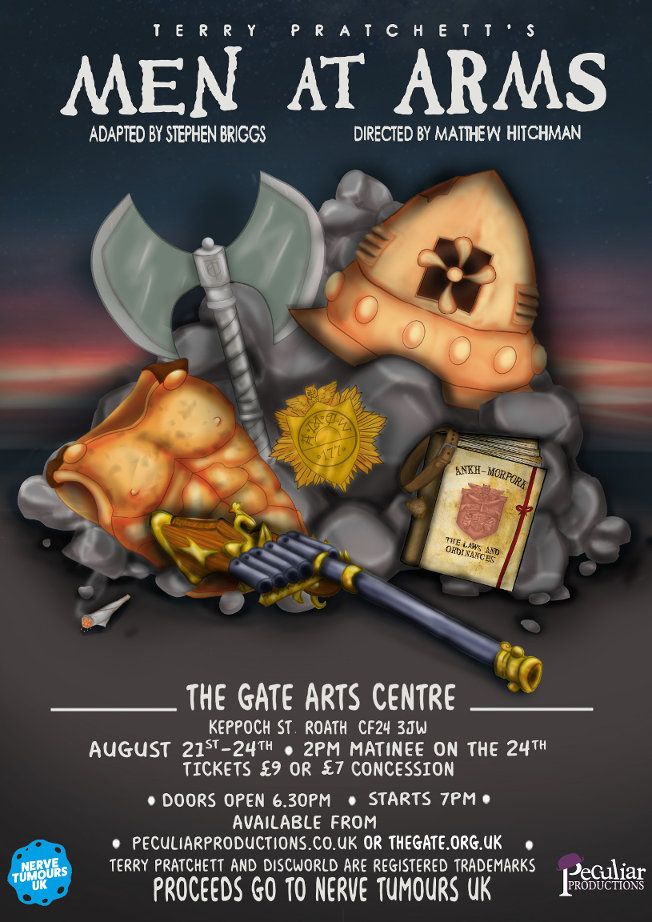 Peculiar Productions returns to The Gate Arts Centre after their successful production of Terry Pratchett’s news-satire The Truth last year. This time, the group is tackling one of Pratchett’s best-known novels – comedy crime thriller Men at Arms.

Captain Vimes has been landed with a new hiring policy that means his City Watch must include members from the city’s populations of trolls, dwarfs, gargoyles, and the undead. On top of managing tensions between his new recruits, Vimes must also contend with a city packed with clowns, assassins, a mostly-benevolent tyrant and a dog that is capable of barking sarcastically.

To make matters worse, a deadly weapon that should have been destroyed long ago has resurfaced, and has entered into the possession of a sinister figure with some equally sinister plans. Vimes and his new recruits must band together – before this mysterious villain throws the whole city into chaos.

First published in 1993, Men at Arms has been praised by reviewers for its madcap humour, memorable characters, and deft social satire. Terry Pratchett was an award-winning author of comedy, fantasy and science fiction, receiving a knighthood for services to literature in 2009. The stage version of his novel has been adapted by Stephen Briggs.

‘Sir Terry deals with complex notions of race, age, sexism and a dash of politics, topped off with an entertaining crime story,’ says Director Matthew Hitchman. ‘It’s an incredible mix of themes, ideas, and some very silly jokes. I’m delighted to be directing it!’

Peculiar Productions Chair, Sarah Roberts, adds ‘You don’t even need to be a Pratchett fan to love this show. The humour, tension and excitement speak for themselves. We’re all very excited for you to enjoy it!’

Peculiar Productions was founded by members of popular Cardiff group Monstrous Productions in 2017. Their first two productions, Terry Pratchett’s The Truth and Tom Stoppard’s Arcadia saw a total of more than £6,000 being donated to charitable causes. Proceeds from Men at Arms will be donated to Nerve Tumours UK.

Men at Arms runs from the 21st – 24th of August 2019 at The Gate Arts Centre, Cardiff. Tickets are £9 (£7 concession) and can be purchased from peculiarproductions.co.uk or from the venue (thegate.org.uk)