Comedian Nish Kumar’s Your Power, Your Control is coming to Cardiff this April 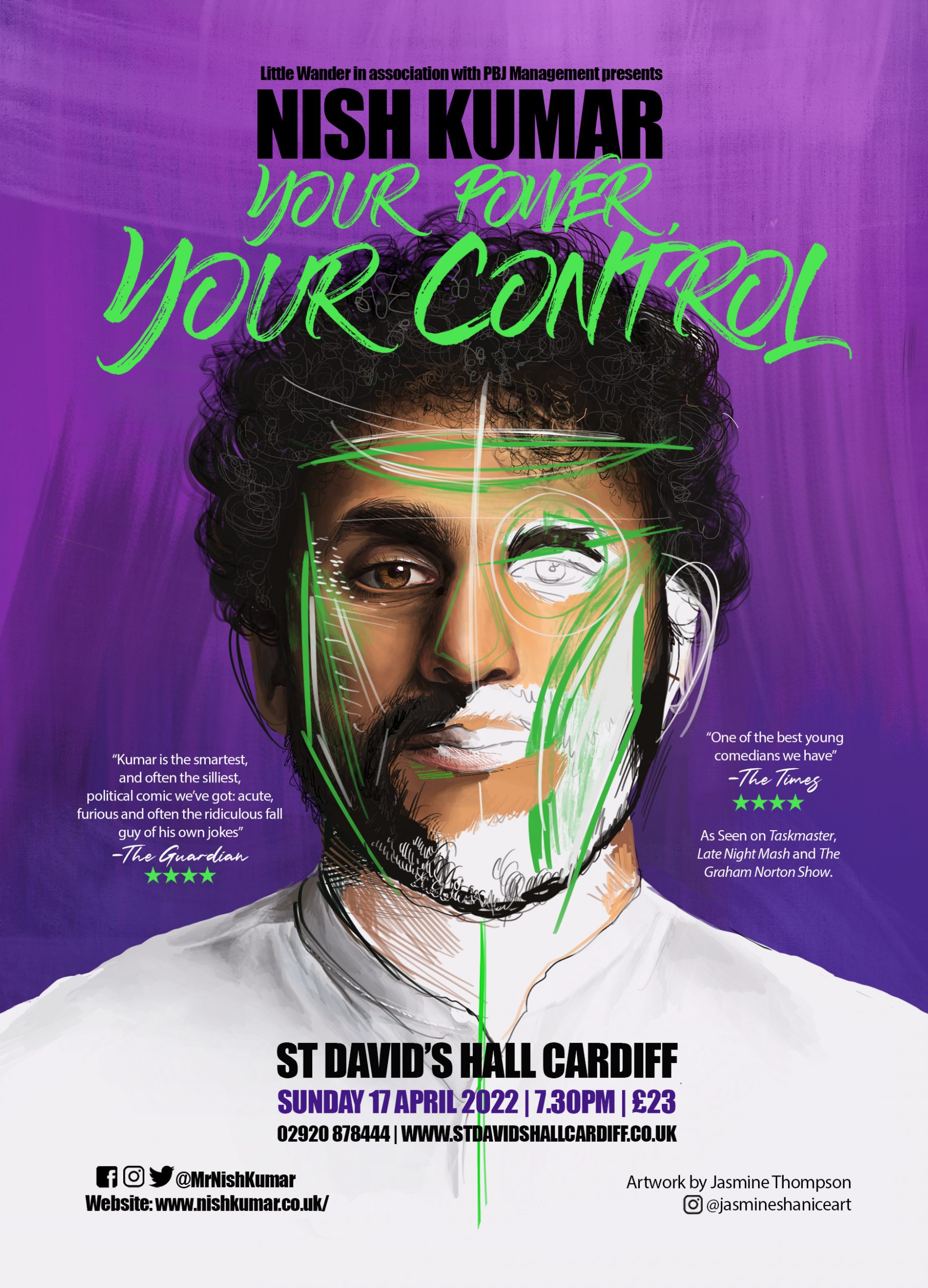 There can’t be too many comedy touring shows this year revolving around the throwing of a bread roll. Nish Kumar’s Your Power, Your Control strongly features that time he was on the receiving end of a baked-product hurling at a charity gig. For a while he was an undisputed rising star of the British stand-up scene with one excellent Edinburgh Fringe show after another and media appearances ranging from hosting Newsjack on the radio and The Mash Report on TV, to cropping up on everything from Question Time (twice) to Sunday Brunch (five times).

Eventually, he has plonked himself firmly near the top of the country’s comedy pile. That, of course, doesn’t mean Nish will be free of having non-admirers, one of whom saw fit to chuck an oblong loaf in his general direction during an anti-Brexit routine he was delivering at the Lord’s Taverners Christmas lunch in 2019.

This flour-based outrage allows Nish to find plenty humour in an already daft incident with his audience anticipating how it will all pan out (pan, of course, almost being the French word for bread). “I looked to my right and saw it rolling near me and I just had to say, ‘did someone throw a bread roll at me?’ There was a table of comedians there and I saw Tim Key’s face through the darkness: he was just nodding at me. I think Chris Addison was having an argument with the bread thrower but the identity of that person remains unclear to me.”

During Your Power, Your Control, Nish places the bread-roll incident into the context of his worst five gigs ever, which also finds a place for a night during his Edinburgh Fringe debut run in 2012 when a seat was taken in his 50-seater room by one Victoria Wood. To all intents and purposes not only was this national treasure not especially rolling in the aisles, but she also looked extremely displeased throughout.

“It’s like your nightmare day,” recalls Nish with a grimace. “I saw her when I walked on stage and in that venue she was too famous for all the attention in the room not to be fixated on her. I’m not by any means in the pantheon of British culture and she is one of the most beloved comedians of all time, but if I go to a show and know I’m very visible, I definitely do my best to make sure that it looks like I’m having a good time.”

Nish is keen at this point to emphasise that Victoria Wood is among those whose work he has long adored and still fully respects her as a comedy icon. “If you look at Acorn Antiques there’s something of the Garth Marenghi about it. But then you look at Dinnerladies, and everyone – my parents, my grandparents – we all loved it. So obviously her having a bad time at my gig is a low career point for me.”

So far it seems that Your Power, Your Control is focussing on those people who have not been admirers of Nish’s comedy, but the many thousands of stand-up fans who will buy tickets for this tour will attest to the fact that his work is widely admired. His sharp political commentary and fierce intelligence are both allied to a solid sense of fun, which will be evidenced in a routine where he pokes a pointy, if metaphorical, stick straight down the gullet of the national anthem.

It would be unfair to reveal exactly how this unfolds except to say that it’s the closest Nish has come to the confrontational tactics of Stewart Lee where a repeated phrase or gesture carries on for quite a long time. “It has got longer every night [in his work-in-progress shows] because it’s as much fun as I’ve ever had on stage. But I don’t have the stones or iron will of Stewart Lee. That man has balls of steel and he would just keep going with it.”

And we should broach the subject of Your Power, Your Control as a title, a note of relative brevity from a man whose show-names have so far included Actions Speak Louder Than Words, Unless You Shout The Words Real Loud, and Long Word… Long Word… Blah Blah Blah… I’m So Clever.

“The long-winded title is my metier, that’s my brand,” Nish confesses. “I did have more long-winded titles in mind but there was a lightbulb moment where I thought yes, that’s it. My therapist used the phrase when he said to me ‘you’ve got to focus on what’s in your power and in your control’, and I thought ‘that’s a good title for something’. The phrase occurs in the show in its entirety and I thought it would be nice to have a title from a phrase that does pop up in the show at some point. I think Power, Corruption And Lies would have been good, but New Order had already taken that”

Your Power, Your Control may not be pinned down to a single meaning but it’s a title that will be accompanied by more than meaningful comedy. Smart, sharp, and not afraid to be a little bit silly: now that could be the ultimate Nish Kumar brand.