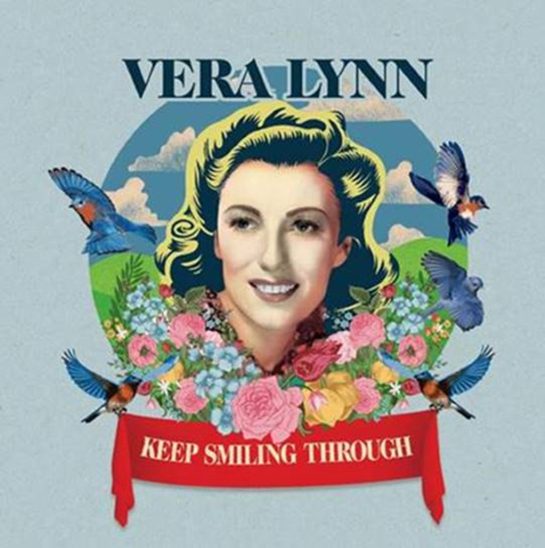 FEATURING ONE OF HER LAST EVER RECORDINGS & OTHER PREVIOUSLY

‘Keep Smiling Through’ features brand-new, never heard before versions of re-orchestrated classic Vera Lynn songs with her beautiful, timeless and inspiring vocals. The album also features one of the last known recordings, her recital of ‘High Flight’: a moving poem written by a WWII fighter pilot read by Dame Vera and accompanied by music. There is also a specially recorded medley and a brand-new version of ‘White Christmas’ as bonus tracks.

A remembrance Sunday tribute to Dame Vera, celebrating the release of the album, was held on Sunday 8th November,  which saw communities of care home residents across the UK uniting from isolation to join a virtual mass sing along of We’ll Meet Again’ hosted by The Smiling Sessions.  ‘Not since the songs original release in 1939 and subsequent war years that followed, has it ever held a more appropriate meaning and message of hope for the nation.

A National Treasure we sadly lost in June 2020, Dame Vera’s iconic voice has raised the nation’s spirits and given us pride and strength, through many difficult times. Her legacy lives on to bring the nation together to sing in the spirit of community.

Care home residents have been the hardest hit by the global pandemic, with shielding precautions in place. Many of them have had their lifetimes immeasurably enhanced by Dame Vera’s wonderful songs. The Smiling Sessions (a registered charity) who, under normal circumstances, host weekly sing-alongs within care homes across the UK – have switched to hosting the sessions virtually to bring enjoyment to isolating residents.

‘Keep Smiling Through’ is out on Decca Records

1. SOMEWHERE OVER THE RAINBOW Feat. The RAF Squadronaires

3. MY SON, MY SON Feat. The Royal Philharmonic Orchestra

5. AS TIME GOES BY Feat. The City Of Prague Philharmonic Orchestra

6. WISH ME LUCK AS YOU WAVE ME GOODBYE Feat. The RAF Squadronaires & The Brighton Festival Chorus

7. CLOSE TO YOU Feat. The RAF Squadronaires

9. A NIGHTINGALE SANG IN BERKELEY SQUARE Feat. The City Of Prague Philharmonic Orchestra

10. WHEN YOU WISH UPON A STAR Feat. The City Of Prague Philharmonic Orchestra

11. FROM THE TIME YOU SAY GOODBYE Feat. Feat. The Royal Philharmonic Orchestra