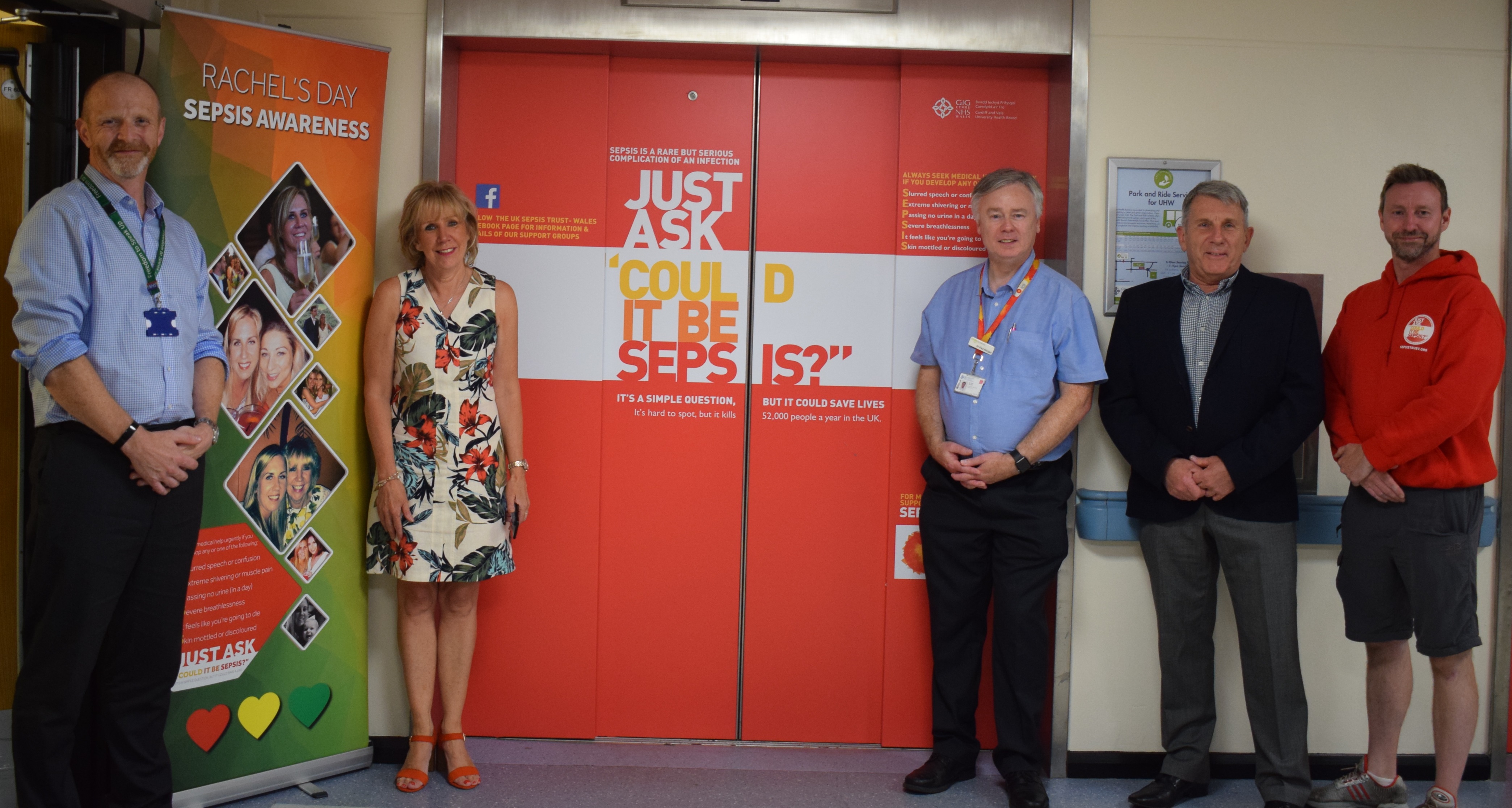 The eye catching wraps are on the main lifts at the two Cardiff and Vale University Health Board hospitals and contain key information and advice on how to spot the signs of Sepsis.

Rachel Day sadly passed away in 2017 after contracting Sepsis. Her parents Bernie and Steve along with the rest of the family and ‘Rachel’s Army’ of friends have spent the past two years actively campaigning and fundraising to raise awareness of the signs and symptoms of Sepsis so that no other family has to go through the same.

Fundraising from ‘Rachel’s Day’ events have been used to fund the new lift wraps at two of Wales’ biggest hospitals to help raise awareness. The lift wraps contain the symptoms, how to find out more information and, if seriously concerned about their health or that of a family member or friend, prompt them to consider sepsis.

Sepsis is the immune system’s overreaction to an infection or injury where it attacks the body’s own organs and tissues. If not treated immediately, it can result in organ failure and death yet with early diagnosis, it can be treated with antibiotics.

The illness kills more than 50,000 people in the UK – more than bowel, breast and prostate cancer combined and one in four sepsis survivors can suffer permanent, life changing effects.

Terence Canning, who leads the Sepsis Trust charity in Wales said “There is still a lot of work to do to raise awareness of sepsis so that, if concerned, members of the public can access healthcare promptly and just ask ‘Could it be sepsis?’.

“Unfortunately Sepsis can take hold very quickly and the chance of a positive outcome decreases over time but it can be treated if caught early and these awareness raising materials will go a long way to spreading the message and minimizing delays with this time critical condition.

“Bernie Day, her family and Rachel’s Army have worked tirelessly to raise awareness and we are grateful we can work with them to provide these eye catching messages to try and prevent others families going through what the Day’s have sadly been through.”

Stuart Walker, Executive Medical Director for Cardiff and Vale UHB said “I was personally very moved by Rachel’s story. To be able to thank the family for their commitment in raising Sepsis awareness, despite their traumatic circumstances, was humbling. It’s right that no one should die from unrecognized Sepsis but more needs to be done across the UK to raise awareness with clinical staff and the public, so they know what to look out for. The lifts wraps are a great addition to the work the UHBs Sepsis leads have been doing in relation to Sepsis awareness both in hospital and in the community.”

Rachel felt unwell on the second May bank holiday weekend in 2017 and asked her friend to take her to A&E on the Monday morning. Due to the long waits at A&E, Rachel was told she may be best returning home to bed with paracetamol which she did. Unfortunately Rachel’s condition deteriorated and an ambulance was called where she returned to A&E and was taken straight to Intensive Care put into an induced coma, placed on life support and attached to drips as well as antibiotics and fluids. Sadly just 10 days later, even after losing all 4 limbs in an attempt to save her life, Rachel lost her fight against Sepsis.

The Day family and friends began their fundraising with “Rachel’s Day” which started with a dog walking event in light of Rachel’s passion for dog walking. Events have since grown and the family and friends have been instrumental in raising awareness of Sepsis and also raising money to fund local Sepsis Awareness projects in conjunction with the UK Sepsis Trust.

The family and friends, despite their grief have raised money which has been used within Cardiff and Vale UHB to not only install the lift wraps but was also used to fund the first batch of the newly developed Sepsis Six Pathway which means all patients presenting with symptoms are screened so clinical teams can better respond in the golden hour.