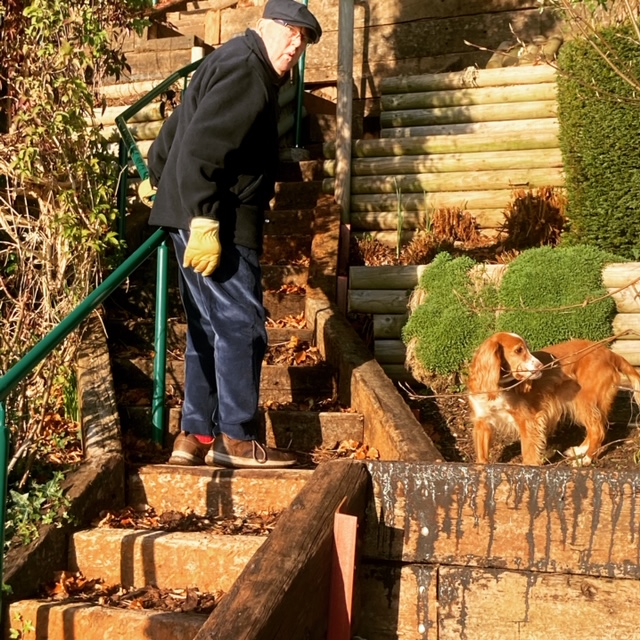 In his 90th year Alan Blake aims to climb Welsh, English and Scottish mountains with an aim to raise 100K for Parkinson’s and Rotary club charities..

Alan aims to navigate the majestic hills and mountains, without leaving his own garden. Alan will be raising money for Parkinson’s, Rotary and the local Parish church of Burghill.

Alan will be climbing the bank of his steep riverside garden to complete the same amount of steps as it would take to climb the mountains that he loves.

To complete this challenge Alan will climb the 120 circular steps around his garden on a daily basis.  Since October Alan has climbed the Blorenge, the Sugar Loaf, the Black Mountains, the Brecon Beacons, Cadar Idris,  Snowdon, Scafell Pike and now heading down Ben Nevis and beyond – Alan has so far climbed over 25,000 steps, and counting.

Alan has been a member of the City of Hereford Rotary Club for more than 50 years and has also been supporting and caring for his wife who has had Parkinson’s for over two decades.

The 89-year-old was forced to put his activities on hold when he was laid low by illness early in the year but happily he is now recovered and starting to scale up his efforts again.

Before his illness, Alan was completing two circuits a day.

And now, full of the spirit of the late Captain Sir Tom Moore, who provided the inspiration for the project, the City of Hereford Rotary Club member, who will be 90 in September, is now able to complete one, and sometimes two, circuits a day once again.

“Dad has so far climbed the equivalent of local landmarks the Blorenge, the Sugar Loaf, the Black Mountains and the Brecon Beacons, as well as Cader Idris and Snowdon,” said Alan’s daughter Maria Blake.

“He has just finished Ben Nevis and is now moving on to the Eiger and the Matterhorn.”

Alan’s efforts have so far raised £13,400 for his three causes. Anyone who would like to make a contribution should visit his Just Giving page at https://www.justgiving.com/crowdfunding/louise-blake-1?utm_id=1&utm_term=ra8b9x6j6

We all wish you the best of luck Alan!