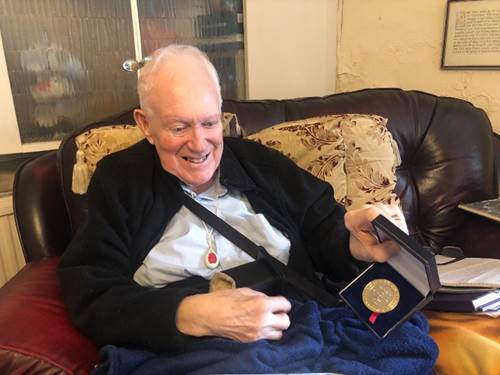 The Baptist preacher and retired lecturer was diagnosed when he was 17, just before going to university when he fell into a diabetic coma.

Dr Dann said: “I was weak, I was tired, I was thin, I didn’t know what was wrong with me until I collapsed. The doctor sent me to Llandough Hospital, and I was there for three weeks. My parents were told I may not survive. But I pulled through. Diabetes management was completely different then. The needles were terrible, a lot thicker and there were no insulin pens available. It was very hard.”

At the time he was advised not to move far from home, so he didn’t take a place at Oxford University and opted for Cardiff University.

After graduating with a chemistry degree, he became a teacher in England, and then at his old school, Cathays High in Cardiff. “I never stopped learning and now have five degrees including law, philosophy and education”, he added.

“It’s a real privilege to present John with this medal. We met 10 years ago when he had lived 60 years with diabetes. He is a source of inspiration for so many people with diabetes. His approach to life, his thirst for knowledge and the way he manages  and respects his condition and adopts technology but still carries on and enjoys life is truly remarkable”.

Dr Dann uses a Libre (glucose monitoring system) and four insulin injections a day. Asked about what his secret for a long life with diabetes is, he said: “My advice is, be careful, treat it with respect, treat it seriously, but not too seriously. That’s the way I have always lived. You have to be sensible, don’t ignore it, but don’t let it dominate you.”

He also mentioned how important the Diabetes UK Cardiff Volunteer group, which he chaired, had been “an opportunity to meet people, discuss and help each other”, he said.

Dr Dann’s wife, Thelma who was also a teacher, died earlier this year. “I was very fortunate to have had the support of my wife for over 50 years and also that of my children, Clive and Ruth.

The John Macleod medal was established in memory of the biochemist and doctor, who was awarded the Nobel Prize in 1923 for the discovery of insulin, jointly with Frederick Banting.

For information on living with diabetes go to https://www.diabetes.org.uk/guide-to-diabetes