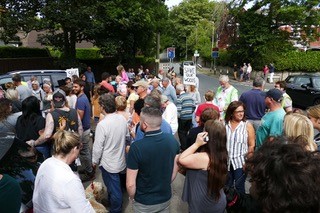 Over 350 residents of Dinas Powys, including local celebrity and environmental activist, Charlotte Church, descended onto The Woodland Trust on Sunday in support of a campaign to prevent a huge concrete dam, the size of a football pitch, being built in a place of outstanding natural beauty. The walk, attended by people across the age spectrum, was arranged by local action group, Save Dinas Powys Woods and Protect Homes from Flooding, to provide information to residents about the dam.

Natural Resources Wales (NRW) say that the dam is one of the their preferred options to safeguard 198 local homes in Dinas Powys which they say are at risk of a one in one hundred year flood. NRW accept that the dam, some 60m wide, 120m long and 3.5m high, would cause irreversible damage to ancient woodland with associated displacement of plants, nature and wildlife. They have admitted that this scheme will use up to £7 million of public money and will restrict access to the most visited Woodland Trust owned site in Wales, attracting over 50,000 visits per year.

The proposal has met with significant criticism and opposition. Local residents were joined on Sunday by Anthony Slaughter from the Green Party and Julie Morgan AM.  Also in attendance to answer questions was Chris Matts, of The Woodland Trust.

Cathy Farr of the Action Group addressed the gathering, stating: “The proposed dam will be enormous and hugely damaging to the local environment. It will not only ruin a local amenity, but will destroy ancient woodland and displace wildlife, including dormice, a protected species. The site will be closed for 18 months during the construction phase, and then 4 – 6 times a year when the dam will be filled causing flooding to a large area of The Woodland Trust site, drowning animals and totally changing the biodiversity of the whole area. As it is, Wales has only 2% ancient woodland; we simply cannot afford to lose any more. Yes, we want homes in Dinas Powys protected from flooding, but NRW have ninety-seven other options that they could consider that would not have such a catastrophic effect on the natural environment.”

Anthony Slaughter, leader of Wales Green Party and a Vale resident, said ‘The large turnout for Sunday’s ‘Save Dinas Woods’ event showed the strength of feeling and concern in the local community towards the potential environmental impact of NRW’s proposed dam on these ancient woods. The climate emergency is real and NRW are right to be exploring future flood mitigation measures but there are grave concerns over the damage the proposed dam would do to wildlife habitat and local biodiversity. The dam would also result in the loss of a valuable and much treasured green space with obvious impacts on the local community’s health and wellbeing. 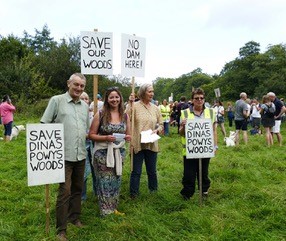 We have a duty to future generations to protect these vital green spaces and NRW must give serious consideration to the many more environmentally friendly proposals for future flood prevention in the area.’

Chris Matts added, “We were delighted by the turnout today and encouraged by such strong local support. I have never seen so many people at The Woodland Trust all at the same time!”