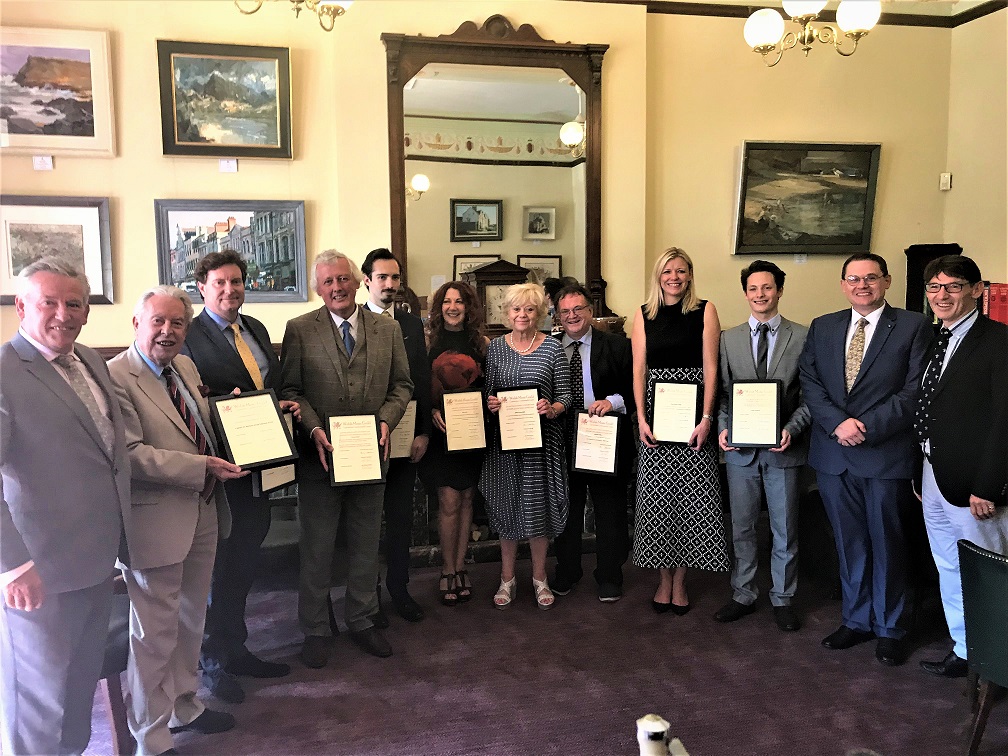 Sopranos, harpists, composers and record producers were amongst the musical glitterati celebrated for their commitment to enhancing Welsh culture at an illustrious awards ceremony.

The Welsh Music Guild presented nine coveted prizes at its annual awards luncheon held at the Cardiff & County Club on the opening weekend of the National Eisteddfod.

Before a packed audience of some of Wales’ most influential and notable musicians, singer and broadcaster Shan Cothi, composer Dr Lyn Davies and Universal Records senior manager Mark Wilkinson were amongst the impressive list of award recipients.

President of the Guild Captain Sir Norman Lloyd-Edwards welcomed guests and award winners to the County Club and explained the important work undertaken by them to further the development of Welsh music and musicians.

“The Welsh Music Guild remains dedicated to its original purpose of advancing the education of the public by encouraging the understanding and appreciation of the music of Wales,” he said.

“Today we will celebrate a plethora of extraordinary talented individuals, either Welsh born or residing in Wales by recognising their massive contribution to the enhancement of our culture and positioning on the world stage.

“Individually they have all become high achievers in their given fields and their tireless efforts should be deservedly recognised in this way.”

Founded by John Edwards in 1955, the Welsh Music Guild has succeeded in promoting the careers and works of musicians by exerting a strong influence over broadcasting and recording companies, festival organisers and global musical bodies.

In honour of their founder the Welsh Music Guild annually award The John Edwards Memorial Award.

Regarded as the most prestigious non-competitive award given in Wales for services to the nation’s music, recipients have included composers Alun Hoddinott, John Metcalf and Grace Williams, performers from Osian Ellis to Bryn Terfel and institutions including the Royal Welsh College of Music and Drama, the Vale of Glamorgan Festival and the Lower Machen Festival.

Capt Sir Norman Lloyd Edwards, who received a Lifetime Achievement Award at the ceremony, explained that the Guild continues to exert a positive influence on the Welsh music scene.

He explained: “The Guild has established partnerships with the School of Music at Cardiff University and with the Royal Welsh College of Music & Drama and has developed a close working relationship with both Composers of Wales and Ty Cerdd.

“The Guild is currently expanding its work by engaging in projects with both the BBC National Orchestra and Chorus of Wales and the National Youth Orchestra of Wales.”

Winners of the Welsh Music Guild Awards 2018 are:

1) The 2018 John Edwards Memorial Award, the most prestigious non-competitive award given in Wales for services to the nation’s music, was awarded to Dr Lyn Davies, former Head of Vocal Studies at the Royal Welsh College of Music and Drama

2) The 2018 Sir Geraint Evans Award for a significant contribution to Welsh Music was awarded to Geraint Lewis, Artistic Director of the Lower Machen Festival

3) The 2018 Glanville Jones Award for an outstanding achievement in music in Wales was awarded to Gillian Green MBE, Artistic Director of the Fishguard International Music Festival

4) The 2018 Joseph Parry Award for an exceptional contribution to musical education in Wales was awarded to Suzanne Hay, Head of Partnerships and Learning, BBC National Orchestra of Wales

5) The 2018 J. Mervyn Williams Award for a contribution to the communication of Welsh music through media production was awarded to Mark Wilkinson, Senior Vice President, International Marketing and Artists & Repertoire at Universal Music, Global Classics

6)The 2018 Geraint Stanley Jones Award for a contribution to music communication through broadcasting in Wales was awarded to soprano Shân Cothi, presenter of the daily BBC Racio Cymru programme, ‘Bore Cothi’

7) The 2018 Paul Mealor Award for Young Composers was awarded to Luciano Williamson, recently graduated from the  Royal Welsh College of Music and Drama

8) The 2018 Paul Mealor Bursary for Student Composers was awarded to Jasper Dommett, who has recently completed his first year of studies at the Royal Welsh College and Music and Drama